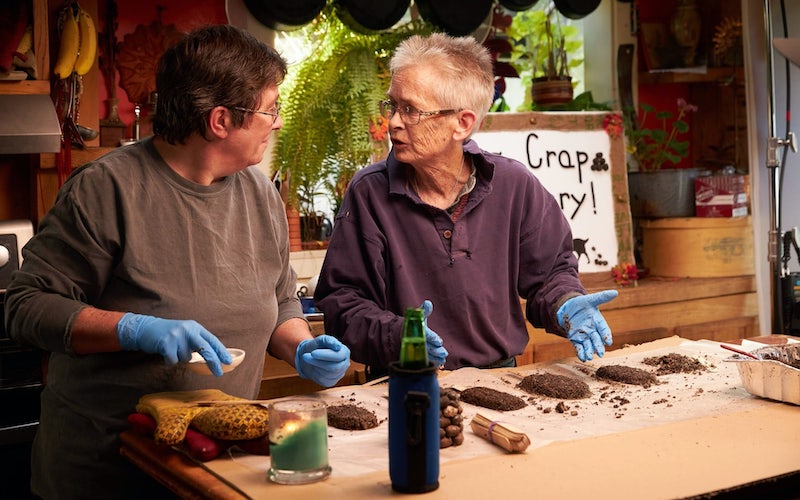 On Tirdy Works, Mary Winchenbach drops turd jokes and puns faster than she and her team can turn moose poop into trinkets. “I find turds, I make crap, and people buy it,” she says.

Mary is the center of a tightly packed reality show that is immediately comfortable and familiar. It’s the lovable small town oddballs of Schitt’s Creek meets Parks and Recreation’s documentary about lovable oddballs working together. This extended family are real people, though, and spending time with them is the shit.

Creating stuff out of moose poo is Mary’s dream, and she’s a natural jokester and salesperson—a video of her selling at a craft show went viral, and it’s immediately clear why she’d be a great TV star, and why that video was worthy of being turned into a reality TV show. “I think the moose is my spirit animal, because I just think about shit all the time,” she tells the camera, her eyes as electric as her hair.

In Maine, where wavy hills of green trees are popping with the reds and oranges of fall, and where the general store’s sign says it has guns, wedding gowns, and cold beer, Mary collects moose turds. With her wife, Deb, and the help of neighbors and friends, Mary assembles those into things you can buy on her web site, like dingleberry ornaments, “Deerings,” “fecal people,” and clocks.

This is a bigger small business than you’d imagine. Mary unveils an aquarium of moose turds at a town meeting in the fire house, and says, “Look at all those freakin’ turds—9,000 turds in here. That’s $55,000 worth of inventory.”

Mary is the center of the business and the series, along with her wife, Deb, and their three kids. “My parents play with poop,” deadpans their 14-year-old daughter, Katie, who wraps the words in teenage eye-rolling dismissal to hide her love and admiration.

But the supporting cast are all rich characters themselves. Mike, the Somerville, Maine, fire chief, is our tour guide to the town, and stands in front of the fire house and talks lovingly about his community and Mary with his wicked New England accent.

Tammi, who makes moose turd clocks with her husband Craig, introduces herself by saying, “My name is Tammi. They call me the bitch on the hill, because I am.” But at best, she’s Sophia Petrillo from The Golden Girls: barbs emanating from someone who it’s impossible not to love.

Dale, identified as a “Somerville Local,” is a 16-year-old whose known Mary since he was a kid. He wrangles cows and introduces his community while sitting on a three-wheeler and says, “It’s out in the sticks, for sure. There’s a lot of hicks out here,” and then, gesturing toward his himself, adds, “if you can’t tell.”

In episode two, Dale unveils a taxidermied moose to decorate their craft show booth, and Mary says, “That’s not a moose dick. You got a bull moose with no dick.” Cut to Dale saying, “You gotta let your freak flag fly, and this case, our freak flag was a freakin’ dickless bull moose.”

The playful interaction, quick wit, and love for each other is so thoroughly Charmin’.

A half-hour comedic reality show populated with quirky characters is not new, but most of those shows strain to squeeze out a narrative and jokes. Tirdy Works has the fiber of its characters to make it flow much more naturally.

It does not feel scripted like Duck Dynasty, a show so phony that producers in Hollywood talked about whether or not the cast had table reads, and that just outright lied to viewers.

Nor is everything so obviously forced and stilted as it now is on Chrisley Knows Best, a show that is perhaps a cautionary tale for Tirdy Works.

That’s because there is barely a narrative here. You can feel the moments where the producers are nudging, shaping, trying to create a plot to hang episodes on, although they’ve also come up with a solution that makes that unnecessary.

Several of its already-scant 24 minutes are filled with themed interstitials, such as a segment highlighting the “Legends of Somerville,” that develop characters and have jokes without needing to connect those moments to a story.

Still, the show’s attempt to create stakes is a little bit messy. Mary and Deb have quit their jobs to focus full-time on Tirdy Works, and Mary and her team can’t keep up with the demand for their shit ever since the video went viral.

But the first episode—titled “The Ultimatum”—introduces a contradictory conflict, with Deb wanting Mary to prove this is profitable. “I’m just sick of always being broke,” Deb says in the second episode. That may be true, but it also seems like the show is trying to create relationship tension, to make us want to root for Mary and Deb’s success.

I was already doing that. Mary is such a natural storyteller/salesperson, and her friends are perfect comedic partners, and her family so full of love and kindness, that I just want to spend time with them. I hope it can stay locked into its characters, and not shit the reality TV bed with fake nonsense.

I could try to make an argument that Tirdy Works is a show about small town USA, about communities coming together to help each other—or making the best use of your surroundings and talents, or fostering kids, or taking an idea and just running all the way to Shark Tank with it.

Those things are all here, yes. But they’re a trampoline off of which moose turd jokes bounce in the back yard of Tirdy Works’ endearing characters. They create gifts out of moose turds, and they’ve also created reality TV’s next great family.