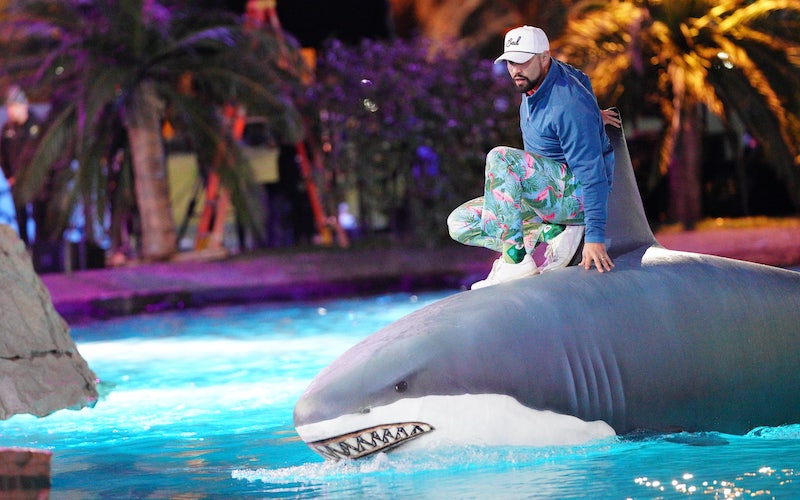 Good morning! This is the week that would have started traditional summer reality TV: The Bachelorette, with its oldest star ever, and then the return of Love Island. Neither will premiere this week, because that was before, and this is now.

However, there will be plenty of new shows to watch this week and this summer, as I explore in a story for Primetimer. And there are all kinds of shows, from ABC’s Holey Moley to Fox’s new dating competition, plus Netflix’s The Big Flower Fight.

So, here are the reality TV and documentary premieres for this week.

The returning show I’m most looking forward to is Holey Moley II: The Sequel (ABC, Thursdays at 9, then Thursdays at 8 starting June 11). I loved season one, and I’m glad this show was able to complete production in early March before things shut down.

I was also very excited about The Big Flower Fight (Netflix, today), which has “teams of florists, sculptors and garden designers” who “create extravagant floral installations,” according to Netflix. Read my full review.

Netflix is also getting into the real estate drama space with Selling Sunset (Netflix, May 22), which follows “twin brothers Jason and Brett Oppenheim and their staff of beautiful young agents.” You know they’re serious about selling real estate if they have beautiful staff members.

There are two other new network competitions premiering:

The early 2000s A&E show Sell This House is back (FYI, Mondays at 10), rebooted but still giving “desperate homeowners” help selling their houses.

RuPaul’s Drag Race will have a virtual reunion this Friday, followed by a finale with remotely filmed lip syncs.

Meanwhile, the spin-off RuPaul’s Drag Race Out of the Closet premieres this week (YouTube, Tuesdays), going into the closets of some of the show’s previous cast members.

The crews of two tuna boats that work together to catch during the winter are being followed for the new series All on the Line (Discovery, Fridays at 9).

If you’re missing Survivor already, Naked and Afraid XL (Discovery, Sundays at 8) is adding a new twist, with the 12 survivalists able to vote each other out.

Dog lovers, NatGeo WILD is doing a “weekday-long marathon” starting at 7 a.m. today. The network said a full schedule is here; let me know if you find it, because I could not.

Also let me know if you know why so many TV networks make it so hard to find their schedules on their web sites. It has to be intentional, right?

Mr. Tornado (PBS, Tuesday, May 19, at 9) is about the man who created the Fujita Scale for measuring tornado intensity, which I learned about while watching a documentary starring Bill Paxton and Helen Hunt.

Speaking of entertainment that’s not actually nonfiction, At Home with Amy Sedaris returns for another season this week (truTV, Wednesdays at 10). I cannot recommend the show more highly, at least if you like unhinged lunacy like this.

get this preview via e-mail every Sunday

Two new cast member-filmed reality shows, both of which are from casts we already know,

Similarly, there’s a one-off special, Once Upon a Quarantime (Lifetime, Wednesday, May 20, at 9) in which four couples filmed themselves. Why would we watch people doing the same thing we’re doing? The difference: They “are facing major life milestones—from pregnancies and changes in birth plans to quarantine weddings and border barriers separating fiancés—all while living life under lockdown.”

Sleeping with Friends (YouTube, May 20) is not quite what its title suggests: it will teach several “EduTubers” how to get better sleep by turning that into a competition.

This week’s NOVA offers “a stunning, up-close look inside the nest of a new bald eagle family” in Eagle Power (PBS, Wednesday, May 20, at 9, and streaming), which “explores the extraordinary abilities and resilience of” the eagle.

St. Louis Superman, a documentary nominated for an Oscar, comes to cable tonight (MTV, VH1, and MTV2, Monday, May 18, at 9), and focuses on “Representative Bruce Franks Jr., a Ferguson activist and battle rapper who was elected to the overwhelmingly white and Republican Missouri House of Representatives,” according to MTV Documentary Films.

FX’s first feature documentary, AKA Jane Roe, premieres this week (FX, Friday, May 22, at 9) and tells the story of Norma McCorvey, who was Jane Roe in the landmark Supreme Court Case. FX says she “reveals the unvarnished truth behind her journey from pro-choice to pro-life and beyond—in what she calls her ‘deathbed confession.'”

Lance (ESPN, Sunday, May 24 and 31, at 9) is a two-part documentary about Lance Armstrong and his life and downfall. ESPN says it is “based around extensive interviews and conversations with Lance Armstrong,” if you need more of those.

V-E Day’s 75th anniversary was May 8, and this week, National Geographic Channel has “a full day of World War II content,” including two new premieres: