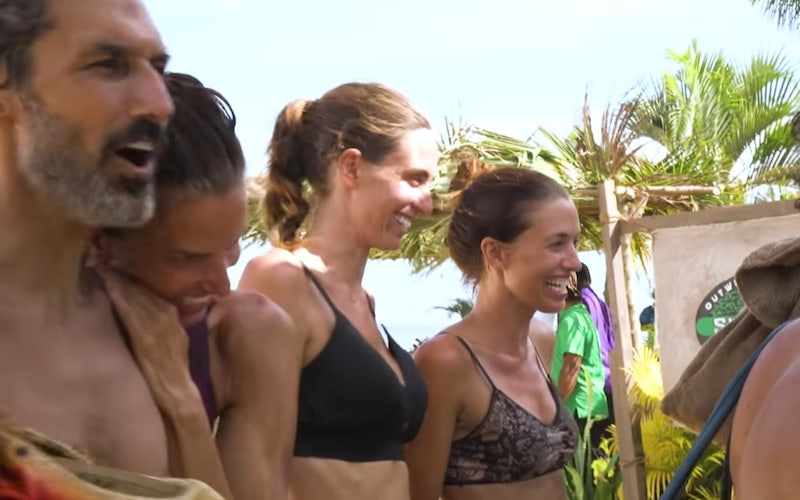 Survivor: Winners at War's jury arrives at Ponderosa and see themselves in the mirror for the first time.

This past week brought me a lot of reality television joy, some of which was rather unexpected. There was the very satisfying three-hour Survivor: Winners at War finale, sure, but I didn’t expect to get such an emotional and funny bonus episode of the show. You can watch that below.

Also, I’ve included three other recommendations, including a show that’s just starting its season and a show that ends tonight, too soon. But I start with a fun at-home version of a show I’ve missed.

I miss Hollywood Game Night: We haven’t had a new episode since last September. But this Tuesday, NBC aired a special for-charity episode, filmed remotely, with host Jane Lynch in her actual house instead of a set that she pretends is her house. (Watch it here.)

Jane Lynch started by acknowledging the fake audience sounds, which actually worked well and made the episode feel more like a regular version of the show, albeit one where her dog was frequently walking around in the background.

The games translated surprisingly well, and while I thought that the more physical games would be impossible, the producers found several ways to have the celebrities engage in some goofy physical activity.

It’s not a replacement for the real thing, but a great way to raise money for children living in poverty. I’d love to see more of these Hollywood Game Night episodes over the summer or into the fall—it’s some fun and levity that I can definitely use.

The final episode of Celebrity Drag Race airs tonight (VH1, Friday, May 15, 9:30), and I will miss it—especially after last week’s penultimate episode, which was perfect.

Literally, it was a perfect 90 minutes of Drag Race. The three celebrities—Alex Newell, Schitt’s Creek star Dustin Milligan, and American Ninja Warrior host and Celebrity Apprentice winner Matt Iseman—all committed fully to everything they did, and they did one hell of a roast of RuPaul (and the judges, and each other).

Working with Bob the Drag Queen, Nina West, and Kim Chi, they also each opened up about their very personal and specific reasons for doing the show, and also for their love of Drag Race.

A quick bonus recommendation of We’re Here (HBO, Thursdays at 9), which is very different but very good. I plan to write more about both soon.

Worst Cooks in America (Food Network, Sundays at 9) is usually not for me—everyone is just trying too hard, and it’s exhausting and feels phony—but this new celebrity cast made me laugh out loud several times this past Sunday.

Anchored by Johnny Bananas and Sonja Morgan, and not one but two toaster ovens, it was a blast, as I explained in my review.

I hope it stays this fun, and look forward to Sunday’s episode.

Ponderosa is what Survivor calls its contestant holding area, for both before and after the game. It’s where, in a normal season, the cast members who are voted out pre-jury hang out until they’re sent on a trip somewhere, clearing out Ponderosa for the jury, who lives there until the final Tribal Council.

This season, the jury all lived on the Edge of Extinction, and thus arrived at Ponderosa at the same time, after the battle-back challenge. That means that their first glimpse of themselves in a mirror, their weigh-ins, and their first meals is a group experience for 14 people.

From the moment they ravenously eat in a tent after the challenge (“You would think that these people hand’t eaten in over a month,” Adam says) to reflecting on their Survivor careers, it’s an incredibly satisfying 50 minutes.

One of my favorite chapters is one with the family members of the jurors residents, who reveal that they didn’t even know where they were going until they pulled up to the Edge of Extinction, so it was a surprise for everyone.

Ponderosa is produced by James Seale, who has produced Ponderosa for years now, along with three producer/videographers and an editor, and what they’ve created is both funny and emotional. It really does feel like a full episode that CBS should put on television.

Since the Ponderosa videos are scattered across CBS’s Survivor YouTube channel, I made a playlist to make it easier to watch them in order. I hope you enjoy this bonus episode of Survivor as much as I did: