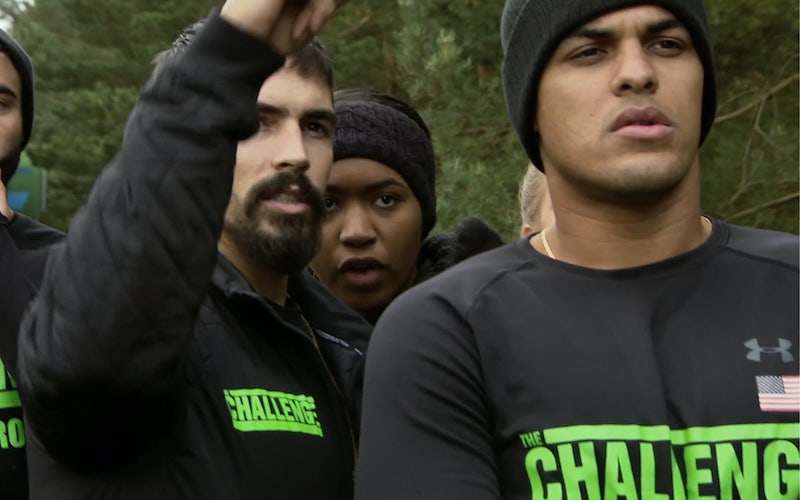 Jordan, Bayleigh, and Josh try to figure something out on The Challenge: Total Madness episode 5. (Image from The Challenge via MTV)

I first discovered MTV’s The Real World—and thus the magic and joys of reality television—by stumbling upon a marathon one weekend back in the 1990s. It was the original binge-watch in the decade before on-demand channels, streaming services, or even just digital TV guides.

But this is not a story about nostalgia, because MTV still marathons shows all the time. In fact, most of its schedule is nothing but marathons. But this is a story about what it chooses to marathon, and why, this week, it will be airing 88.5 hours of Ridiculousness—3.7 days of that show—and only 1.5 hours of The Challenge: Total Madness.

Earlier this week, Jarett Wieselman tweeted asking MTV to “open the vault & give us marathons of Sorority Life, Rich Girls, The Paper, The Challenge (early seasons), Legally Blonde: The Musical — The Search For Elle Woods, Ashlee Simpson Show, and like every Making The Video/Diary ever.”

I’m completely on board, and not just for MTV. Earlier this spring, Bravo aired a day-long marathon of NYC Prep, and Twitter lit up with people who’d stumbled across it. More of that, please

As you can see from my weekly previews, networks are churning out new reality shows and new seasons constantly, sometimes dozens every week. Most of those land with a dud and disappear.

There’s already so much to watch. Especially now, with an uncertain future, why not reach into the vaults and deliver some nostalgia, or a show that may have been before its time? Why not marathon old reality shows all day?

Well, MTV is already doing that, kind of.

Variety’s Kate Aurthur responded to Jarett’s tweet and wrote, “I was scrolling through the MTV schedule recently, and it’s basically Ridiculousness and Catfish 24-7. I don’t understand!”

I don’t either, but it’s fascinating. I shared one of my favorite Twitter accounts, @MTVSchedule, which keeps track of MTV’s schedule visually. Just scroll through its tweets, and you’ll see a sea of orange, the color used to indicate Ridiculousness.

This past week, @MTVSchedule tallied 177 plays for Ridiculousness, 31 for Catfish, and 13 for Jersey Shore: Family Vacation.

The Challenge? One play, 90 minutes.

The only thing that is not ridiculous about that is that the show it broadcast for almost four days total is called Ridiculousness. If you haven’t seen it, it’s just a clip show of viral internet videos, hosted by Rob Dyrdek. Here’s how often MTV is showing it this week:

Is this what the kids want? Actually, no!

The Challenge: Total Madness was Wednesday’s #1 show on cable

It’s not what the kids want, at least according to linear TV ratings.

The only demo that it wasn’t #1 in was people 50+, who were tuned in to watch Fox News personalities continue their destruction of a generation.

The Challenge was more popular than all of Fox News’s prime-time shows, and also more popular than Bravo’s The Real Housewives of Beverly Hills (#2), VH1’s Black Ink Crew (#3), and Food Network’s Guy’s Grocery Games (#8), and History’s Forged in Fire (#9).

The episode of Ridiculousness that followed The Challenge at 10 p.m. was the 83rd most-popular show, with a 0.10 rating and 274,000 viewers, compared to The Challenge’s 0.57 rating and 1 million viewers.

These are linear TV ratings, meaning that it’s just measuring people who watched live or the same day. It may not adequately represent total viewership, especially younger viewers who may not even be watching cable, choosing instead of stream or watch online.

But the relative difference is striking. MTV has the most popular show on cable television on Wednesday nights. Why on earth is it airing it just once a week?

Is that a strategy to force fans to tune in at one time, so they can’t just wait for a repeat, and thus boost the ratings for that one timeslot, making it as valuable as possible?

Is there something about the rights to new shows that prevents MTV from repeating it? Is MTV monetizing those shows better elsewhere? And why is MTV mostly airing Ridiculousness? Are its ratings that good for the repeats, or is it that disposable?

I reached out to both MTV and the show’s production company, Bunim-Murray to ask, and will update if I hear back.

MTV has 168 hours of programming to fill every week. But it’s using that entirely for repeats, mostly of one show, and airing new episodes of its most-popular reality TV shows just once. This seems like ridiculous madness.