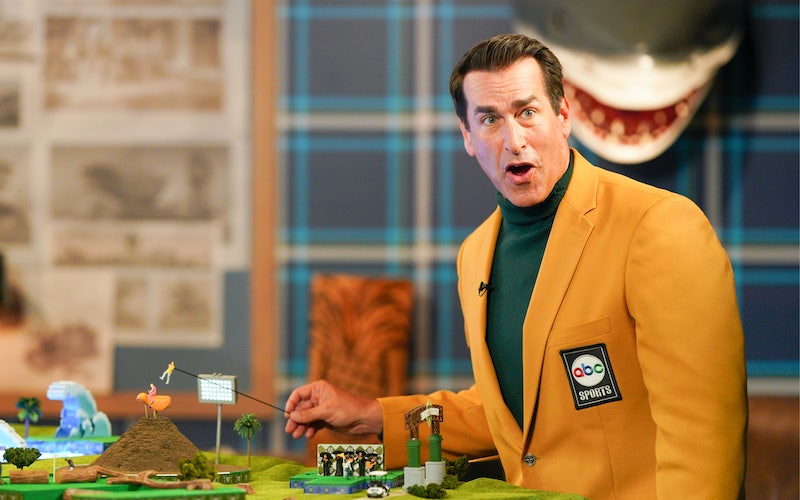 “Holey Moley has returned, and everything in the world is good again,” Rob Riggle says at the beginning of Holey Moley season 2. Our world may be in disarray, but watching this delightfully over-baked casserole of absurdity is an excellent distraction.

ABC’s Holey Moley may just be my new favorite summer reality show, because it is both completely dumb and also a legitimate competition. Somehow, Holey Moley has managed to become more like Wipeout but also more like pro mini-golf.

Sequels tend to be worse than the originals, but Holey Moley II: The Sequel (ABC, Thursdays at 9) has bucked the trend and is far superior to season one, which was not shabby.

The field has shrunk from 12 to eight contestants per episode, which means the show doesn’t have to skip over entire holes to fit everything into an hour. It is still sudden-death: the eight are paired off and then the winners of those four match-ups face off on two new holes. That leaves two players left for the final hole.

Holey Moley 2 gives more time to the actual putting and playing while turning up the absurdity about as high as it can go without the dial breaking off.

The first hole, “Dragon’s Breath,” literally set its contestants on fire while they’re putting. On fire! And they’re not just wearing massive protective gear, but it’s very obvious that the special effects artists have made sure their suits actually catch fire.

Compare that to season one, where some players were distracted while putting by Kenny G playing saxophone. (Although the Kenny G hole, the Distractor, is back, and I apologize for writing “Kenny G hole.”)

Steph Curry is also back, but this time he’s literally been animated, turned into a cartoon character so he doesn’t actually have to spend any time on the course or a set. Last season he spent maybe a few hours helping players out on one hole, playing against a robot that gently mocked him, thanks to Rob Riggle.

There’s a similar-ish new hole where Jon Lovitz, dressed as a pirate, chips the contestants’ balls across a lagoon. For the contestant who has the worst first putt, Lovitz is blindfolded by two eye patches. “Thank you. What happened to my career?” he asks when he walks onto the set.

But that hole, “Putt the Plank,” isn’t just Jon Lovitz hitting the ball, as the Steph Curry hole last year pretty much was. This one has the contestants walk a plank and jump onto a circling fake shark. If they can’t leap onto it and ride around the lagoon, or fall off, they get a penalty stroke.

That hole has been eliminated along with others that rarely resulted in any kind of surprise, and the show is better for it. Instead, there are many more holes that result in contestants jumping and flying through the air, whether they’re bouncing off of cushioned poles or port-a-potty doors. I will never not find this shockingly hilarious.

The few holes that have returned have mostly been enhanced. The windmills, for example, now have an additional blade, and are set high above a pool of water, instead of next to a flower bed.

Season-one’s finale, the volcano, has been repurposed into “Polcano,” a hole that combines Plinko with mini-golf—and a pole that contestants slam into while holding onto a zipline.

The final hole, “Frankenputt,” was the only disappointment. It was more editing and special effects than challenging game play, and for the best two players of the episode, I wanted to see them challenged on the green.

If the contestants don’t sink their ball, they get an electrical shock. But that’s outside of the actual putting, and so the shocks aren’t an obstacle, they’re just a threat. The contestants aren’t thrilled to be shocked, and move their bodies in hilarious ways when they get zapped, but it’s a bit that wore thin really quickly.

Thankfully, though, Holey Moley is a reality TV show willing to point out its own holes.

Holey Moley 2 is not afraid to mock itself

Hosts and commentators Joe Tessitore and Rob Riggle are back, as is sideline reporter Jeannie Mai.

Tessitore and Riggle are one of reality TV’s great hosting duos, and while I don’t know how much of their lines and jokes are scripted for them, or re-worked in the moment, I don’t care because their delivery and chemistry is so perfect.

Steph Curry’s absence is about the only thing that the show doesn’t directly mock about itself. While the show often winks at conventions and just has fun, in the season premiere, Holey Moley takes several hefty swings at itself via Rob Riggle.

During play on “Beaver Creek”—a new hole that is supposed to resemble a beaver dam but actually just resembles a Big Brother challenge that was abandoned halfway through construction—Rob Riggle won’t stop mocking it.

“Joe, what do you think of that creek?” he asks of a painted, padded cushion that’s underneath a rolling log that players have to cross. “I actually just think they ran out of money, because that looks hokey, hokey, hokey. I don’t think there’s water in it, to be honest with you.” (There is clearly no water.)

After the players both successful traverse this travesty, flopping onto their bellies on a padded cushion, they’re left with stains on their clothes. “The paint not even dry on this set, Joe. And that’s probably why this hole sucks,” Riggle continues. “How obvious is it that we’ve run out of money, Joe?”

That continues later: “This hole Beaver Creek really sucks.” Yep, it does, especially those half-hearted piles of logs on the green.

But what does not suck is a show that not only acknowledges its flaws but turns them into a running bit. Holey Moley II: The Sequel is not just good again, but better than before. Welcome back, ridiculous friend.