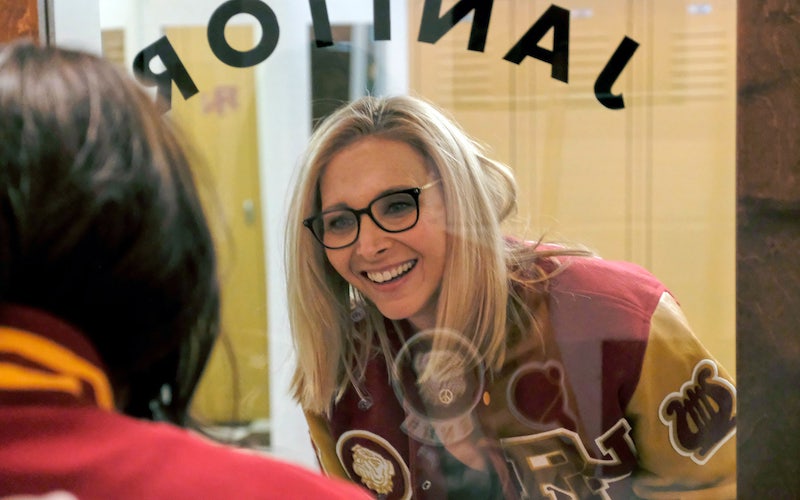 Lisa Kudrow looks in at Courteney Cox, who's trapped in a janitor's closet on Celebrity Escape Room (Photo by Trae Patton/NBC)

For its annual Red Nose Day fundraiser, NBC typically airs a special edition of Hollywood Game Night. But that was on last week, so tonight, before the telethon, there’s a new one-off reality TV show: Celebrity Escape Room (NBC, Thursday, May 21, at 8).

On the special, Courteney Cox, Lisa Kudrow, Adam Scott, and Ben Stiller enter a made-for-TV escape room and play as a team, with Jack Black serving as game master and host. It is ultimately a lot of fun, although they are certainly not the world’s best escape room team.

They’re earning money for charity with every task they complete, as M&Ms has kicked in a paltry $150,000. (The family that owns M&Ms’s parent company is worth $89.7 billion in 2018, when they were America’s third-richest family, and the parent company makes “more than $35 billion in revenue,” Bloomberg reported.)

I can’t quite imagine a scenario in which the contestants would have earned less than M&M’s full donation; Hollywood Game Night just rounded up Facebook Groups’ donation/advertisement up to $150,000.

The charity totals—and the interstitial segments—don’t really matter, then, and are likely just there to remind viewers to donate to a great cause. Via Red Nose Day, Comic Relief raises money to help children living in poverty.

I’d love to see Celebrity Escape Room become part of Red Nose Day every year—and it’d also make a terrific series. A regular series would need a different escape room set and challenges for every episode, which probably makes that less likely than Hollywood Game Night (which has a standing set and less-involved challenges). Science Channel had a pretty great escape room reality show in 2015, which is still available to watch, so it is possible.

Celebrity Escape Room opens with Jack Black in full Jack Black, playing an evil-ish game master character. While it was a little much for me at first, I eventually warmed to it, especially appreciating his jokes about the celebrities’ inability to figure some things out.

Good escape rooms need coherent storylines and richly designed sets, and the set design of Celebrity Escape Room is very detailed, following a theme (high school, prom) and storyline through each of the rooms.

The decor in the rooms, especially the first two, have quite a few references to the celebrities past roles and lives. Alas, few of these end up being actual clues. But that’s probably for good reason: the celebrities are not great at this game.

Celebrity Escape Room’s cast is entertaining even as they stumble

Celebrity Escape Room’s actual rooms are well-designed, both the set decoration and the challenges. (The production designer, James P. Connelly, also designed NBC’s Making It and Songland, plus ABC’s Holey Moley and Fox’s The Masked Singer.)

There are several rooms and challenges that are complex enough, though this would be on the low-end of an escape room’s difficulty rating.

The show points out to us at home what clues the cast should be focused on, which I was initially annoyed by, though it doesn’t give away everything, so you can play along at home.

Whether you’ve been in as many escape rooms as I have or not, you’ll probably be a little ahead of the celebrities and/or yelling at your TV.

There’s a bit of a learning curve to escape room design, so I’d be curious to see how four celebrities who have previously done escape rooms would perform—though they’d probably have breezed through several of the challenges that stump this group.

I adore Lisa Kudrow and Adam Scott as actors, so I couldn’t help but be a little disappointed in them at some moments. And Ben Stiller, oof; he is not the best at following directions, never mind noticing patterns, or listening. Courteney Cox brings out some Monica, as she and Jack Black both say, and rallies the team more than once.

While this cast isn’t going to win any escape room awards any time soon, they thankfully have other skills and talents.

But they were all game to play. That’s what makes this a joyful hour of TV: their struggle is real. But they try anyway, and laugh, and are genuinely surprised and delighted when they succeed.