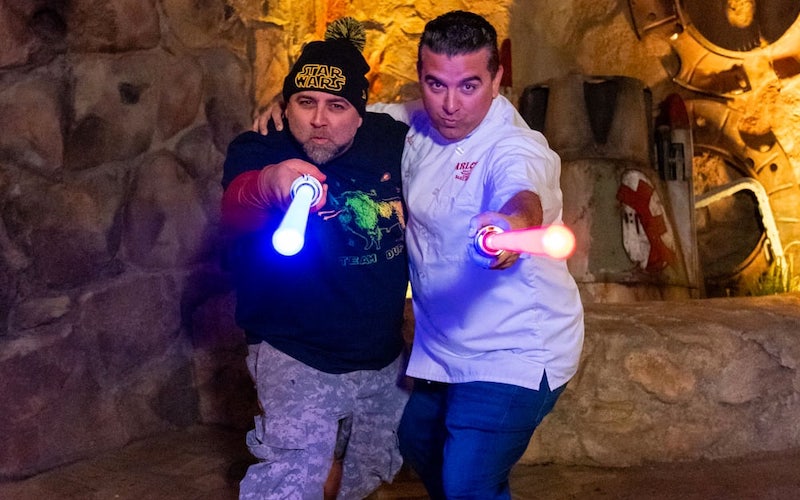 After “the cake battle of the century”—well, the second of this century, since this was Buddy vs. Duff 2—Buddy Valastro and Duff Goldman are now even, as Buddy won the second season, even though he lost the final competition and the majority of the contests this season.

Buddy vs. Duff was the most-popular show on Food Network in 2019, so it was a no-brainer for it to return, even though season one was baffling: Buddy didn’t seem to want to be there, the rules and judges changed repeatedly, and even the narration changed.

It felt thrown together, and that’s to say nothing of the super-sketchy season one points (they were perfectly tied going into the finale, cue eyes rolling) and Buddy’s whining.

The show brought together stars from two shows that used to be competitors—TLC’s Cake Boss and Food Network’s Ace of Cakes—but are now owned by the same corporation, since Discovery bought Scripps’ networks (including Food Network and HGTV). It seemed like a way to bring Buddy into the Food Network family, but he did not come out of season one looking good.

“Last year I was very humbled,” Buddy said in season two, and it was nice to have this new Buddy. (As I mentioned in my season-one review, Duff said that he and Buddy became friends during season one, but that wasn’t evident then. It is now.)

Buddy vs. Duff season 2 had:

The teams meant that Buddy and Duff actually faded into the background a little, especially when members of their teams were tasked crafting or sculpting the central, iconic image.

The heroes of each team are Natalie Sideserf (Team Duff) and Ralph Attanasia (Team Buddy) for their extraordinary sculpting work. Natalie’s Yoda and Ralph’s Statue of Liberty were both stunning pieces of art—I’d watch a show with them competing, or, better, working together.

Unfortunately, their efforts were still part of a competition that still came off as highly sketchy.

Buddy vs. Duff’s judging and scoring was highly suspect

The problem with doing a second season of Buddy vs. Duff, especially after Buddy’s behavior in season one, is that a win for Buddy is almost impossible to see as legitimate.

Even if it is, it’s so easy to see it as evening the score, balancing the equation, making everyone happy. And the choices made by producers and/or the network made it easy to question the outcome.

Here’s the thing: For the most part, I agreed with the judges’ decisions during season two, in terms of selecting a winner for each challenge. Buddy’s dinosaur, aquarium, and mini-golf cakes were definitely superior.

And Duff’s finale cake was also clearly superior. I don’t know how you even attempt to reproduce the Millennium Falcon, with its intricate details, but Buddy’s just looked sloppy—and the presentation involved a digital projection and flashing lights as backdrops, not cake.

(Both of the finale cakes were presented during a segment filmed at Disneyland’s Star Wars: Galaxy’s Edge that we were repeatedly reminded was “previously recorded,” since the park is now closed; Billy Dee Williams, aka Lando Calrissian, who turned 83 last month, showed up to introduce the two bakers.)

The judges scored each contestant with 10 points each, for a total of 30 for each challenge. But they never once explained how they got to ther numerical scores—in the way that Tournament of Champions and its blind judging did so well—and if you look at the eight episodes, Buddy’s wins were always by much larger margins than Duff’s wins.

Here, I’ve gathered their points into a handy chart:

*Going into the finale, we were told Buddy had 189.5 points versus Duff’s 183.5. But bizarrely, we weren’t given the final scores, except to be told that Buddy won with 273 points total.

In the end, Duff won five of the eight competitions, and yet lost by just 1.5 points.

How did Duff only get three more points than Buddy during the amusement park challenge, for example? Buddy’s carousel was impressive for a carousel, but it was a carousel, not a cake. People sat in plastic chairs, it was constructed with metal. There was some cake jammed onto the roof in-between pieces of the plywood frame. And the judges only dinged him for not covering up metal with sugar.

All of this allowed Buddy vs. Duff 2 to have it both ways: Duff has the most victories, Buddy has his win, everyone goes home happy. But this certainly wasn’t a surprising outcome.

More importantly, how is this a cake contest?

The challenges Duff’s team faced in nearly every episode had to do with mechanics, not cake. They made some really cool stuff—but I just struggle to see this as a cake competition. It’s a building competition in which some materials happen to be edible, except no one ever eats them.

This season had some really fun moments, and I enjoyed those moments when the teams interacted with each other—and enjoyed getting to see the creativity, skills, and ingenuity of those team members.

That seems pretty clear. But if this season rated as highly as season one did, I wouldn’t be surprised. Maybe next time they could adopt the blind judging model of Tournament of Champions—or just flip a coin instead of wasting all that cake.