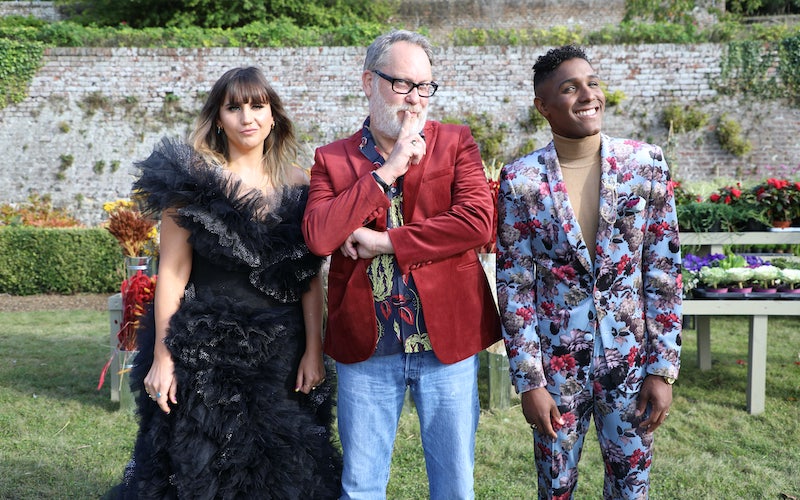 There is a “lot of burglarizing going on,” The Big Flower Fight host Vic Reeves says in the third episode of Netflix’s new competition. The Great British Bake-Off has been plundered, and Vic’s own show is guilty, except they forgot to steal the best things.

The results of the theft have not produced a bad show, but it is certainly not great: underbaked, wilted, you get the idea. Its eight 40-minute episodes may fill five hours of your life and then evaporate. I was ready to have a new The Great British Baking Show, as we call it in litigious America, but it fails to rise to the occasion.

The Big Flower Fight is a competition in which “florists, sculptors and garden designers face off in a friendly floral fight to see who can build the biggest, boldest garden sculptures,” as Netflix says. It’s produced by a UK company, Multistory.

The Big Flower Fight is the latest entry in Netflix’s attempt to wow the world with mediocre versions of popular reality TV shows, preceded this year by Next in Fashion, which was 10 years ago in fashion reality TV, and the lukewarm Too Hot To Handle.

These shows are fine, and while they lack imagination, they replace it with elaborate and expensive-looking things and hope we won’t notice the rest. Like so much of Netflix’s original content, they’re space-fillers rather than game-changers.

Head judge Kristen Griffith VanderYacht, who’s joined by a guest judge in every episode, brings energy to his job, which is to say he seems to be restraining himself from climbing atop the floral structures and tearing flowers out while enthusiastically proclaiming how much he loves and/or hates it.

Kristen is especially fond of something you’ll have never seen before, assuming you’ve never watched any reality TV: the Fake-Out Critique. A judge says something like, I just cannot believe… DRAMATIC PAUSE …how amazing this is and I love it! I tricked you!!

His task is to judge massive sculptures, which are presented for judging in spectacularly beautiful ways, the show’s only jaw-dropping moments. For some reason, I thought this would be a flower arranging competition, creating displays like Kristen Griffith VanderYacht’s work that we see in photos.

Instead, the teams have to create large frames and stuff them with flowers and plant matter. This is the first big misfire: it’s completely inaccessible. I don’t have welding tools to try this at home. And none of the contestants do this in their real life; they’re not home bakers spending a weekend testing their skills.

There are some charming teams, particularly a father and son duo, Ralph (a groundskeeper) and Jim (a student), who will warm your heart every time they are on the screen. Meanwhile, florists Yan and Henck have shown up ready to be the break-out stars of a reality TV competition.

They are in a competition in which no one has ever done this before, which evens the playing field, I suppose. Some of the contestants are landscape architects; others create bouquets of flowers; another team member is a DJ. For having little to no experience of doing what the show asks, the contestants pull it off, and spectacularly well sometimes. There are no major fails or catastrophes.

Some of the work can be quite striking, and it’s presented with gorgeous production design, but it’s hard to get a sense of the thing or to care. The editing doesn’t help, skipping over entire teams in early episodes. (Netflix made only three episodes available to TV critics.)

The episodes are short, for Netflix, around 40 minutes, yet there is just one challenge and we don’t get to see all the work. The Great British Bake-Off can get through three challenges and judging of each individual in an hour, and still have time for frivolity.

But the third challenge asks them to make dresses: actual couture gowns made out of flowers, worn by a human, a challenge that would be impossible enough for someone on Project Runway.

One of the contestants has done fashion design; the others haven’t, so now you have landscape architects and florists taking their models’ measurements and not having any idea of what they’re doing. Once they’re done, a guest judge dings a team for their couture dress made out of flowers because it has an “element of costume to it.” Imagine that.

The Big Flower Fight is doing a death drop across the Atlantic, that’s how severely it’s trying to straddle American and British reality TV tropes.

On the one side, the producers stoke some minor drama, like by making them teams fight, unnecessarily, over the actual flowers. Top Chef does this, too, probably because Americans just love to watch people fight over resources. It’s our national pastime.

It’s also brought back confessional interviews to interrupt the action, because someone thought we needed to see the teams explaining everything.

On the UK side are twee drawings of the teams’ planned work, and hosts who perform silly bits, both directly plagiarized from GBBO, of course.

Instead of a countryside tent, The Big Flower Fight was filmed in a countryside giant domed greenhouse outside of Maidstone in Kent, England. The hosts are two comedians, Vic Reeves and Natasia Demetriou, who you may recognize as Najda from What We Do in the Shadows, and who says “I have the worst job” while announcing the losing team, as if she is actually on Bake-Off.

If you’re going to plagiarize as much as this show does, at least do it right. It’s like a kid copying answers from a teacher’s answer key Scantron and then changing some of the answers because they don’t like the pattern formed by the bubbled-in letters.

After spending its first two episodes challenging the teams to fabricate frames and then adorn them with flowers, The Big Flower Fight gives up on both flowers and fabrication in episode three. I am tempted to give up there, too. As Kristen Griffith VanderYacht says in one of the early episodes, “I think the idea is great. But it’s all about execution.”