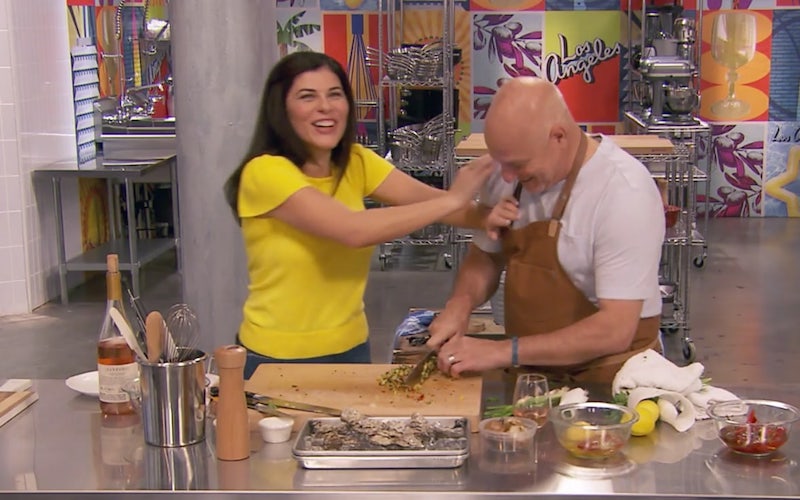 Nilou Motamed and Tom-Colicchio have fun as Tom attempts the same challenge as the Top Chef All Stars LA contestants, in the web series What Would Tom Do.

The best part of Top Chef: All Stars LA so far is not on TV, it’s on Bravo’s web site: It’s called What Would Tom Do?, and what head judge Tom Colicchio is doing is drinking wine and cooking some food using the rough constraints of one of the show’s challenges.

After the first episode, which asked the all-star chefs to cook with a wood fire on the beach, Tom uses a wood fire in a studio to create grilled oysters with compound butter, a dish that he tells us he makes in his own fire place, as one does when one has both a fireplace and oysters. In the studio kitchen, Nilou Motamed pours glasses of wine and holds up a fan to Tom’s face, simulating the wind the chefs had to deal with at the beach.

Whether you’ve found Top Chef: All Stars LA to be as underwhelming as I have, or if you like to see reality show judges tackling the same challenges as contestants, or you just appreciate a quick cooking demonstration, this web series is an absolute delight—full of all the fun and playfulness and the raw cooking that’s been missing from the actual show. (Why is the show so intent on not letting its contestants just cook?)

Nilou, the former editor of Food and Wine who substituted for Gail Simmons during Top Chef Kentucky, is with Tom in the kitchen, drinking wine, asking him questions, and sometimes helping and sometimes just bantering and joking around.

Even the editing is having fun, sprinkling in graphics and sound effects, or including the moment when a camera pans around past the crew to show us a paramedic sitting by the ovens, looking at their phone.

The web series is part cooking lesson, part wine-drinking hang-out. Episodes are only five or six minutes. The disappointing part is that although four episodes of Top Chef: All Stars LA have aired as of tonight, just two episodes of the spin-off have been released so far: one where Tom attempts the very first wood-fire challenge, and one for tonight’s farmer’s market challenge:

I do wonder why the What Would Tom Do? episode premiered before the episode of Top Chef on which its challenge is based, though the online series does not have any real spoilers for the episode.

I also wonder why it skipped two episodes; I would have loved to see Tom attempt the fried rice quickfire challenge from episode three.

Tom told The Hollywood Reporter that he’s been pitching this series as a concept for a while now:

For the last couple of years, I was pitching the show. Finally, they said it was the right season to do it. I get asked the question all of the time: ‘What would you have done? How would you have [approached a Top Chef challenge] if you were competing?’

But I do think to myself, ‘What would I make in a challenge?’ So I wanted to do that as a show, but I wanted it to be fun, and I want it to be breaking the wall. We see the cameras, we interact with the cameras.

[Season 16 judge Nilou Motamed] is with me, which is great, and it’s just a blast. There was some debate about whether I would have to do any of this in the time that was allotted to the chefs, and I was like, ‘No. Stop that, right now.’ Sometimes, chefs had eight hours to do something! Do you want to work on a show for eight hours? I don’t think so!

I say right up front: “No, I’m not doing it in the time allotted. No, I’m not cooking on a beach. I’m in the studio. I get all of that.” Let’s clear that up right away, because I know I’m going to get a lot of that. It’s a fun piece. It’s neat, because some of the stuff I do on the show is stuff I would never cook.”

I’m glad it was finally produced—and hope it continues, with more episodes and perhaps as an expanded version. I’d watch a full half-hour of this, perhaps with Tom cooking his way through past season’s challenges.

With all of the artifice of Top Chef’s competition and drama stripped away, it’s fun to just watch a talented chef and a foodie in the kitchen, cooking, and enjoying.