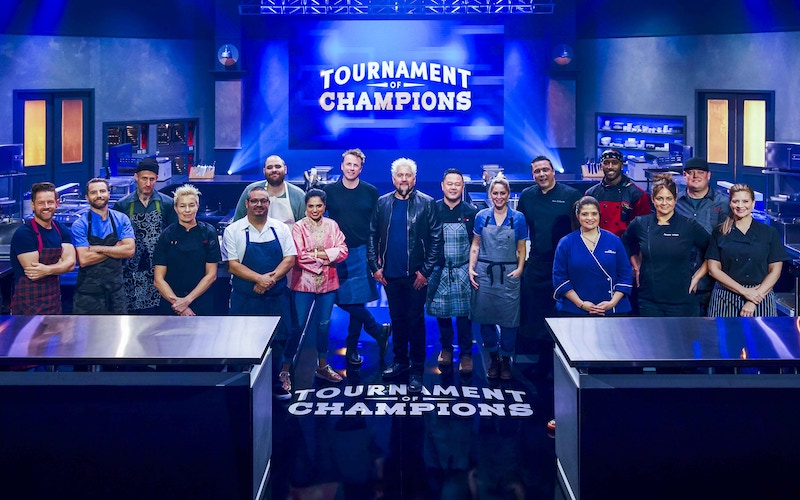 The chef contestants of Tournament of Champions season 1. (Photo by Anders Krusberg/Food Network)

Tournament of Champions concludes its short five-episode season tonight with three final battles between the top four chefs. . (This rest of this story discusses who those chefs are.)

The four episodes will marathon today starting at 5:30 p.m. ET, and it’s worth watching or recording if you haven’t already seen it, in part because it has (finally!) introduced the single best idea to reality television competitions: truly blind judging.

There have been many competitions that try to be less subjective by using point systems, or even with a version of blind judging. Beat Bobby Flay is the best example: it brings in three new judges who don’t know which dish Bobby Flay cooked and which dish his competitor cooked.

Except they know that Bobby Flay cooked one of the two, and even trying to be as fair as possible, I’m sure some of them have been able to pinpoint which dish is Bobby’s because his style and go-to ingredients and techniques are so well-known.

Most reality shows just embrace subjectivity, allowing judgment of personality and performance. And let’s not forget that many shows involve network executives and/or producers in the off-camera elimination conversations, so that shows can retain more-interesting characters and let the duds go.

Tournament of Champions has none of that nonsense, and it’s finale is proof of that.

The final four come from all places in the initial rankings: Antonia Lofaso (1), Amanda Freitag (4), Maneet Chauhan (6), and Brooke Williamson (7).

I’m not sure if the initial rankings were all that scientific, but inside that system, there were wild upsets, including Brooke beating Michael Voltaggio, and #8 seed Darnell Ferguson—who’s just won some Food Network competitions—beating #1 seed and Iron Chef Alex Guarnaschelli.

Top Chef’s new all-star season recovered from its stumble of a start with its touching tribute episode to food critic Jonathan Gold last week, but what remains so remarkable is how little the show just lets its all-star contestants cook. It’s much more gimmicky, and that can produce some entertaining television, but Tournament of Champions is where we get to see chefs face off against one another in a simple and fair format.

Tournament of Champions really has a perfect format: it offers a real challenge, with The Randomizer wheel selecting different ingredients, styles, techniques, tools, and times. But it also just lets both chefs cook.

More importantly, they’re judged blind by a panel of three outstanding chefs who have no idea who cooked what. They don’t even know who’s in the competition!

They do get information about what is in each dish and how it was prepared thanks to Justin Warner and Simon Majumdar, each of whom is assigned to a different chef and ask them questions. They’re basically Alton Brown in Iron Chef, and Tournament of Champions is basically Iron Chef, but modernized and improved.

Why is anonymity so important? It turns out that “anonymizing eliminates the possibility for unconscious bias to impact decisions by removing the information that triggers the bias in the first place,” according to research published in the Harvard Business Review.

That research, which looked at scientists’ applications to work on a Hubble Space Telescope project, “found that female applicants were significantly more likely to have their proposals accepted when their gender was obscured in the application process,” HBR says.

Allowing applications to be fully anonymous is far more successful than other ways of trying to stop bias from affecting people. HBR reports that “many interventions cause backlash against women because of the perception that women are receiving extra advantages or preferential affirmative action. Removing personally identifying information from applications, however, mitigates the potential for bias for or against either sex.”

By removing all information except what the chefs cooked, Tournament of Champions allows its judges to give feedback and offer judgment without having to worry about anything, from their pre-existing relationships or encounters with the contestants to their unconscious biases (which we all have). The judges weren’t even told who was in the competition!

Did that come into play on Tournament of Champions? It’s impossible to know, but the competition started with six women and 10 men. At the end of episode four, host Guy Fieri noted that there are “four female chefs in the semi-finals.” Two-thirds of the female chefs made it to the semi-finals; none of the men did.

The judges also turn their feedback into numerical scores—I’m assuming the three judges’ scores are then averaged to give us the total we see at the end—which allows for comparison across rounds, too. Some of the eliminated chefs have had higher scores than people who won their rounds.

Between the caliber of talent and this judging system, the judges don’t have to give that annoying Chopped feedback, where the judges have to pretend every dish has equal strengths and weaknesses just to create some suspense.

All of this allows the food to stand on its own. Decisions and eliminations aren’t about the chefs themselves, or their personalities, or even about them as cooks.

It’s simply about one plate of food. Alex Guarnaschelli and Michael Voltaggio aren’t failures, they just were out-cooked.

That’s also contributed to the pleasure of watching Tournament of Champions: while the chefs are fully invested and in competition mode, excited and emotional when they win, they have also all been gracious in defeat.

I hope we get a second season of Tournament of Champions—its ratings have been growing, and while they started just below their lead-in, Guy’s Grocery Games, last week’s episode had 1.2 million viewers compared to Triple-G’s 990,000.

But I also hope that other competitions look more closely at their judging, and try this kind of fully anonymous. Arbitrary, personality-driven judging where biases, unconscious and conscious, can seep into decisions, may result in decisions that inflame viewers and get people talking.

But Tournament of Champions has proven that truly objective judging can make for thrilling reality TV. The contestants watch the judges on monitors in their green rooms, and whether the judges’ are heaping praise on them or their opponent, or identifying a problem or flaw, you can feel the anxiousness and anticipation. The contestants can barely sit still on their couches, and neither could I on mine.