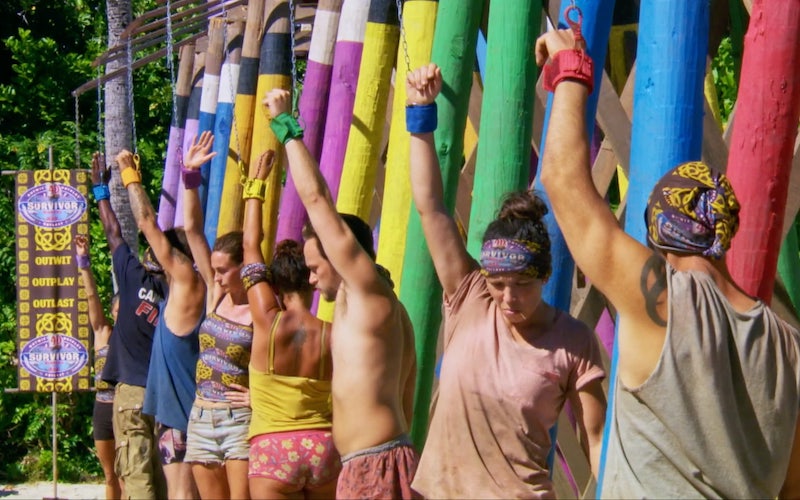 The Survivor: Winners at War episode 12 immunity challenge. One player's arm is not like the others'. (Image from Survivor via CBS)

When an episode of Survivor isn’t great, it’s still better than most television, and certainly an entertaining way to spend an hour. Yet I can’t shake disappointment in the events of this episode of Survivor: Winners at War—that challenge! the whispering!—and the trajectory of this season.

To use the endless war metaphors that the contestants are using in their confessionals, it started as an epic clash of the Titans and now we’re left with people poking each other with plastic cocktail swords. There were two challenges this episode, and those who’ve been voted out played harder than those who are still actually playing.

Meanwhile, if there’s any doubt about Tony’s winner edit, the editors made sure we saw “Boston” Rob “The Robfather” Mariano say to the jury, “Look, Tony’s a boss, dude.”

That lopsided edit is pointing me toward two potential outcomes, both of which I’d be so glad to be wrong about:

The time the episodes spend with eliminated players on the Edge of Extinction is repeatedly making the argument that it is brutal, and tough, and difficult. “That’s what makes this game so good, is that it is so hard,” Rob said during this week’s carry-shit-around-the-island challenge.

Also, they’re literally being given full-on reward challenges now, which is a change from the last time we saw Edge. The only difference is that Jeff Probst isn’t there to mock Adam’s failure to jump over the rocks or praise Rob for continuing (that commentary is not missed).

Perhaps turning Edge into something more resembling the actual game is a way to soften the season 38-style blow when the Edge resident pops back into the game, is handed immunity, and then easily wins the jury’s vote because they’re all BFFs. This season is suddenly so upside-down that I’m rooting for that outcome.

But that is speculation, and there are five hours to go, between next week’s actually two-hour episode (not back-to-back episodes) and the three-hour finale. Let’s deal with what this episode gave us.

While we opened with Sarah pissed at being blindsided by Tony (“my game is sunk,” “you’re not with me”), they quickly mended their partnership, although at first, at least, that came with a wonderfully acidic caveat from Sarah: “if I get voted out, do not talk to me ever again.”

Meanwhile, Tony and Ben made up, with Tony showing Ben his idol, and then Ben finding an idol while Tony was with him and fumbling to try to hide it from Tony, who noticed and called Ben out.

To some degree, both Tony and Ben impressed me at the start of the season by adapting and evolving their games. But they’ve both slipped back into their old ways, error-prone Ben more than Tony.

And honestly, I am just over the Tony tornado. He’s a great television character, but he’s like the quirky sidekick who pops only in small doses. The ladder scene earlier this season was wonderful; enough with the pointless spy shacks.

Speaking of pointless: In a game that used to be about social connections, but that is now about finding and buying advantages to cover for your shitty social game, Ben decided to not talk to Jeremy, and I completely agree with Jeremy that it was childish.

“He’s such a child. Like, grow up, Ben,” Jeremy said. “The game goes up and down.” It does, including for Jeremy, who went from being the likely next vote out to being safe enough to not play the 50/50 advantage that Michele gave to him.

At the start of this episode, players who’d receded into the background emerged ready to shake some shit up, and I was all for that.

Their strategy: Give up immunity and let Tony win.

My reaction to the entire challenge: What the actual fuck was all that?

Let’s start with this immunity challenge awarding two people immunity this close to the end of the game. Why could that possibly be? Here’s a fun fact that Annemarie Navar-Gill tweeted: “This is the second time this season they’ve made an endurance challenge that has typically been won by women in the past an immunity for both genders”.

Next, let’s look at what you can clearly see in the picture at the top of this story, which I’ll include again here for reference.

See any differences in the way each contestant is positioned? I see every single contestant except one with a straight arm. That one person has their arm bent. Which is easier to maintain in an endurance challenge? Which of those people is not like the others? Which of these people won immunity?

Despite that advantage, I don’t think we can say with certainty that Tony won because his arm seems to have been in a more comfortable position. He won because Nick gave up immunity for one fire token, handing the win to Tony.

That was disappointing, and so was watching Kim and Michele take Jeff Probst’s sugary bribe and basically write the $2 million check for Tony.

“How fast security in this game went out the window for chocolate, peanut butter, cookies, and milk,” Probst said, and for once I was cheering his challenge commentary.

A brief tangent: Probst made it clear that anyone who took the offer would have to share, and that they’d only be able to eat for as long as the challenge lasted. Except the challenge ended immediately after Kim, Michele, and Nick dropped out. Denise and Tony won; it’s over. So if they really were dropping out for the chance to eat, oops. Also, why did they get any chance to eat, if that was the rule?

With Tony immune, Kim, Michele, Nick, Denise, and Ben looked to target Jeremy. But Michele and Tony want Jeremy as a shield, so Michele gave Jeremy her 50/50 coin-flip-for-immunity advantage, and Tony tried to save Jeremy by convincing man-baby Ben to not vote out Jeremy.

What’s crazy is that worked, even though the Ben/Jeremy conversation didn’t go well. Another point for Tony in his rapidly accruing bank of points.

What was also crazy is Tribal Council, which became another whisper-fest. This time, at least, there were subtitles, but I’m not going to pretend that I have any idea what was happening.

While this one was more coherent than the last, I think I actually tune out, because these Tribal Councils get me as frustrated as Denise was.

“I’m done!” she said. I felt that same exasperation. Whispering has gone from being strange and new to old and tired, like the spy shack.

There’s a reason why the production smartly prevents the contestants from speaking while they’re being transported from their beach to Tribal Council: They don’t want to miss any strategizing or decision-making, and they also don’t the episode to include a conversation that takes place in a blacked-out van or boat.

But at Tribal Council, where every player is wearing a mic and there are a ton of cameras, the whispered decisions aren’t being captured and/or edited well enough to make it clear what is happening—and more importantly, why.

Earlier, Denise said, “We cannot even get through one Tribal Council and just freaking focus. It’s like a tribe of crazy, paranoid players, and it’s driving us nuts.”

Me too. Also driving me a little nuts: The extended amount of time that Jeff Probst gave the players to talk after the votes were counted, but before he read them.

I mean, yes, it was super-dramatic when Tony pulled out an idol and offered to play it for Sarah and she decided she was safe. And ditto for Jeremy pulling out but ultimately not playing the 50/50 advantage.

But also: Is that now a time for strategizing? After the votes are in?

Anyway, Kim was voted out, having immediately regretted her decision to give up immunity. “Kim, why?” Parvati said from the jury bench.

In her first season, Kim had one of the most dominant games in the history of Survivor, arguably ever, so this was another disappointing end to a strong player’s game. But I suppose that’s what happens with a season with so many strong players: they’re not all going to succeed, and not all can get Tony Vlachos edits.