It’s Shark Week » Instead of lying about extinct sharks, Shark Week is doing something even more harmful.
home > Survivor > Survivor Winners at War 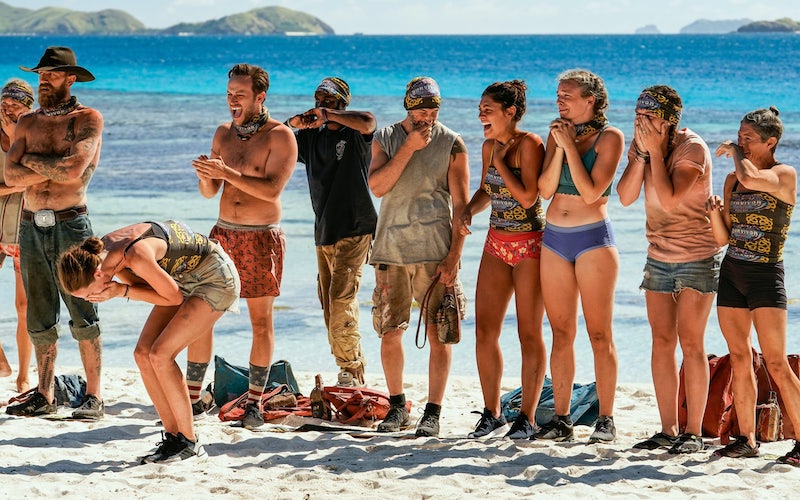 Ethan was, thankfully, very very wrong. In fact, so was I: The loved ones visit has become one my least-favorite episodes, because Jeff Probst has to micromanage it and offer shudder-inducing commentary.

But this family visit episode was better than most, thanks to the players being surprised by the addition of kids, and the Edge of Extinction residents being surprised by their loved ones showing up. There was quite an emotional journey just in Ethan and Rob worrying about all of the bad news that might be coming to Natalie yelling, “Oh my god, it’s our families! What the hell?”

This super-sized loved ones visit arrived after most of the world has been in isolation, perhaps from their families, and so this may have resonated even more than it often does.

I’ve often wished Survivor would do more with the people it’s just flown halfway around the world, and this time, it did: There was no reward challenge, just a reward for everyone of time with their family members. That’s something that should stay in future seasons. There’s no reason to use family members as a reward and/or punishment for losing.

The family visits took up a full half the episode, which normally might be annoying, but it was full of touching moments, and a nice break for human connection in an otherwise cutthroat season.

I loved Tyson telling his daughter, “This is what I do: I run around an island in my underwear,” and referring to the ocean as his toilet. (He’s not kidding: that’s how Survivor contestants poop now.)

“I can’t describe how much sheer joy and happiness I felt in that moment,” Yul said about his reunion He didn’t need to; we saw it. Yet for some reason a certain someone also sees it and yet is still convinced his juvenile commentary and questions will enhance these moments.

Jeff Probst was less insufferable than usual, though I still don’t understand why he’s turned “love” into a noun that he controls, like “flint” or “rice,” never mind why he feels the need to talk instead of just letting us see what is so, so obvious. Imagine seeing all of those tears and emotions and thinking that what’s really missing is your voice. And I really did not need to hear him say about how Rachel and Tyson “hadn’t made a baby” the last time they were on Survivor together.

I had a brief flashback to the early days of the show and its product placement when Probst turned the loved ones visit into a brief ad: “This is a beautiful Survivor moment. This is better than we hoped, hearing all of you guys talking and hugging and loving each other. And i just want to thank Fiji Airways. They made this possible.”

Then he handed out Chef’s Pals, which he got free at the checkout.

My heart softened with the post-credits scene, which basically broke the fourth wall in that it showed the players completely out of game mode: the voted-out players mobbed Probst and hugged him, even ruffling his hair, saying thanks for bringing their families out, too. “That was a thank-you to you guys,” Probst said, and then he pulled out immunity idols and started handing them out. I kid!

But Tribal Council was a bonanza of advantages: Jeremy’s safety without power, Sarah’s steal-a-vote, Kim’s hidden immunity idol which felt almost quaint in its normalness.

An episode’s worth of strategy in just a few minutes

For immunity, the Survivor players had to place blocks on a platform, holding it steady with a rope while moving back and forth to retrieve new letters. This is a challenge we’ve seen before—and, for what it’s worth, even showed up (as an homage?) on Nickelodeon’s The Crystal Maze, replacing lettered blocks with a styrofoam panda in pieces.

Tony won, a first for him. “Slow and steady is not what I’m made out of. I’m made out of fast and sloppy,” he said. A+ for self awareness! (In another comedic Tony moment, when Jeremy got up to play an advantage at Tribal Council, Tony’s response was to fear that his immunity necklace would be nullified.)

It wasn’t until after that, 40 minutes into the episode, that the players began talking strategy. Sarah wanted to target Kim, while old schoolers Kim, Jeremy, and Tyson, perhaps with the help of Denise and Michele, wanted to target Sophie, perhaps using Kim’s hidden immunity idol.

That basically set us up for a 5-5 vote, though in the end, only nine votes were cast: five for Tyson, and two each for Denise and Sophie.

After a lot of whispering—which honestly is really frustrating when we can’t actually hear anything, especially with so little strategizing going into Tribal—it came time to vote.

And that’s when things got truly interesting and dramatic.

Jeremy and Sarah had a little showdown about who’d play their advantage first, or if they’d play it at all. Jeremy decided to use his advantage: the ability to leave Tribal Council without voting.

Jeremy said earlier that “my alliance needs me for a vote,” but it was also completely obvious that he made the right decision, because after he left, Sophie stood up and said, “Why don’t the five of us go make a decision?” I assume that means they’d planned to vote out Jeremy.

Then Sarah decided to steal Denise’s vote. That’d give Sophie’s group six votes, and Denise, Kim, Tyson, and Michele only had three votes. Except Michele ended up voting with the other group, so they only had two!

Update! There were nine votes cast. The majority alliance’s seven votes were split, it turns out, between Tyson (5) and Denise (2). I initially thought Michelle was voting with Tyson and Kim, but since she voted with the majority, that means it was 7-2. But why split like that, since it creates the possibility of a tie? Why not split 4-3, which guarantees the majority can’t tie with that two-vote minority?

To add another twist, Kim played her idol, and after giving it some thought, decided to play it for Denise. This was a major gamble, especially not using it for herself in a situation where the tribe conceivably could have gone to drawing rocks if they were deadlocked.

At first it seemed Kim had guessed right, when two votes for Denise were read. But then it became clear Tyson was the target. “God, I almost did that,” she said.

Ultimately, all of that madness just sent Tyson right back to the Edge of Extinction. On his way, he gave a middle finger to the fire token boxes, as he had none to gift—or perhaps he’s tired of all the advantages they were used to buy, since those contributed to sending him back out of the game.