In Tokyo, Making the Cut cut two winning designers: interviews and a recap

The deeper I get into Amazon’s Making the Cut, the more I have affection for the designers and their work, and the more frustrated I am with the show, and in particular, its judging.

That’s true even though some of the judges changed: Carine Roitfeld is no longer on the panel, and Nicole Richie has left, too, though Heidi Klum said Nicole will return for the finale. (“I was bummed out when we lost Carine; Carine is a huge, big role model for me, and I adore her and I adore her style,” Rinat Brodach told me.)

On the panel instead: Chiara Ferragni, a fashion influencer, and also a CGI Instagram influencer, Noonoouri. Technically, Noonouri didn’t judge, but they literally had her sitting with the judges.

As to the real judges, I’m annoyed with them for inconsistent and unclear, and annoyed with the show for the apparent pointlessness of this “change our minds” process. There is so much to like about Making the Cut, but it’s becoming very clear which changes to make it different from Project Runway have made for better television, and which ones have failed.

Episodes five and six each had a designer go from a win to an elimination in the span of one episode. People do fumble challenges, but twice in a row, someone went from the best to the worst?

For the streetwear challenge, Sabato Russo created one dress that Tim Gunn loved but that Sabato didn’t like when he saw it on a model. During the judging, Tim said of that dress, “for me it was profound.” What frustrated me most about that moment was that the judges didn’t even get to see that dress, and we’ve only once seen them look at clothes up close, during the second challenge.

I don’t think I’m alone in the frustration. In episode six, Sander and Ji Won even discussed their frustration with the judging and the demand that things be both fashion-forward and wearable/sellable.

Rinat Brodach was one of the two designers to go from the top to the bottom.

“To be honest, I was a little relieved that, in episode six, I got to go home, because I gave it my all. And after episode five, where I literally gave everything of me,” she told me. “All the energy … was sucked out.”

Rinat won the episode-five challenge, and besides having her reversible wrap coat being sold, she also collaborated with Puma on two pieces that are also for sale: a hooded pullover sweater and matching pants.

“I’m really proud of myself that I went outside of the box and I really embraced all my discomforts and I didn’t stay in a safe zone,” she said of the streetwear challenge.

The designers arrived in Tokyo from Paris, and “didn’t really have time to get used to the jet lag,” Rinat said. They did get a brief break, though: “We got to go see Tokyo for a little bit, and me and some of the girls we went to go get our nails done.”

Rinat’s win came after the judges praised her work and then called Jonny up, and said they hadn’t yet decided who the winner was. “I’m not sure: it’s TV world. They might have had their minds made up.”

“When they called Jonny up, I was just like, Oh my god that here we go. It’s gonna be reality drama. Like they want us to fight.” But neither of them went after the other. “Jonny’s a dear friend, and I love him, and it’s not about. It’s about me right now,” Rinat thought.

She pointed out that “most of the designers like didn’t really listen to the instructions of the assignment. It’s about Harajuku,” the district that’s a center for fashion in Tokyo. She said “when I was walking around in Harajuku, I didn’t really see nobody on the street wearing all black,” so she went with a more colorful look.

Her effort in the next challenge, which was about embracing two opposing ideas, didn’t work as well for the judges, who cut Rinat. Her inspiration, she said, came when she was spending time at a temple, and “I see this Japanese dude with a baseball cap with a David star; I saw this Buddhist monk and his robe, and I was like, Okay, boom, this is my inspiration. … I just saw contrast between Judaism and Buddhism: one is more constricted, one is more flowy, so I was like, let me go with that.”

But the effort she put in to the previous challenge had drained her. “I literally had all the air sucked out of me after I won. You’re on this high and then boom, you’re on this low because everything just came out of you,” Rinat said.

Despite being eliminated, “I don’t regret nothing on the show, and I had the best time,” Rinat told me, calling it “one of the best experiences in my life. I feel like the whole experience of filming the show was like one big rollercoaster of emotions.”

Sander Bos: ‘This is who I am and this is what it’s going to be. Take it!’

The frustration grew through the season, especially leading up to episode six. There were a lot of boiled frustrations,” Sander said.

“It was a little bit hard to kind of to figure out what they want. A) It needs to be fashion, B) it needs to be commercial enough to sell on a platform like Amazon, at a certain price level, and C) you have, okay, Who are you as a brand?”

Sander said that the judges’ application of that criteria “was sometimes confusing, but once we saw more of the wins, and what they liked and what they didn’t like, it became a little bit more obvious.”

With the episode-six “Opposing Forces” challenge, Sander said, “I really wanted to put my foot down in front of the judges.” He said they’d previously asked him about what his brand was, and if he wanted it to be avant garde, or wearable, or couture, and he said, “I don’t want to choose. I want to be that beautiful silver lining right in the middle.”

So Sander was ready to “tell them this is who I am, I’m not changing. And I was ready: if I had to go home for it, I would have gone home.” Sander said he was open to critiques. “I don’t want to be closed off, but I also needed to make that statement to them, especially at that point in time, of like, Hey, this is who I am and this is what it’s going to be. Take it!”

His design echoed the shape of a t-shirt because, Sander told me, “People say that I need to make more wearable stuff, and I’m always like, I’m not gonna make fucking t-shirts. Just go to H&M.” He said “it’s become kind of icon of my dislike of fast fashion; it’s something that is so over-produced and overdone, and it can be done really beautifully, but it definitely is not flattering 99 percent of the time.”

While the Amazon version of his pants don’t show the pockets—which are shaped like the sleeves of a t-shirt—Sander said that was just for Amazon photographs, and the actual pants do have pockets that pull out just like his original design.

As to the change in judges, Sander said, “I thought it was really really sad to lose Carine, and also Nicole. Carine really giving a very interesting point of view, a fashion editorial point of view, and then also Nicole having her own brand, the business side and the design side. But, we’ve gained Chiara, which was also fabulous, and she brought another perspective.”

As to the CGI judge, Sander said he didn’t know who she was. Backstage, he said, “please tell me her sizes, then I can make her a copy. And they like started laughing and I’m just standing there like, What the fuck is happening? Like, what’s up? Everybody’s like, cackling in the room. … And I felt like an idiot.”

Both of the eliminated contestants, Sabato and Rinat, were very close to Sander. “It was super sad to see Sabato go because he was also a very strong contender and, I mean, how can you not love him?”

“Rinat is somebody I became super close with. “Every time before we began filming, we would like, run downstairs. I would have a Coca-Cola Zero, which was my living lifeline, and my cigarette, and we would smoke and get ready for the day. We would pray together, as you see in the show. We did a lot behind the scenes,” Sander said. While he was interviewed for that episode, he added, “I cried my eyes out. That didn’t make the cut. I bawled like a little kid because I really understand her a lot. She’s a great designer and a great human.” 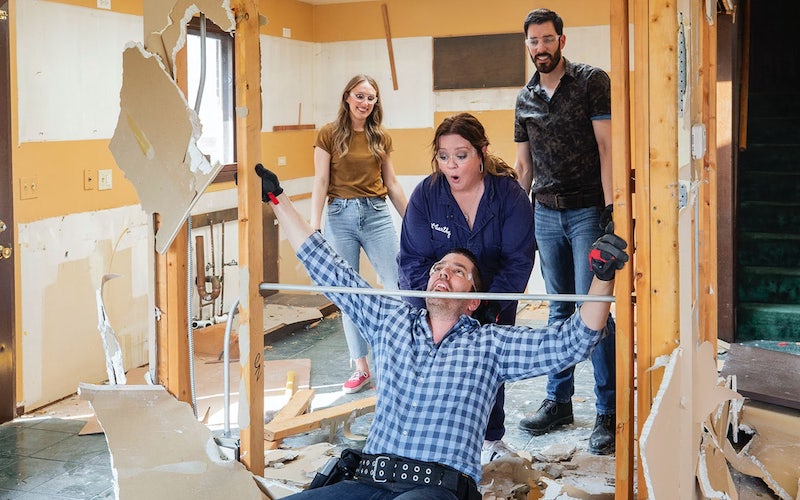