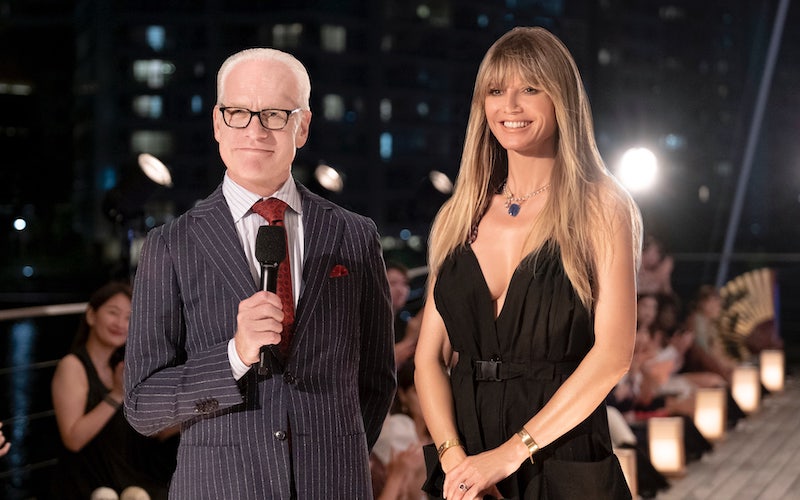 Tim Gunn and Heidi Klum at the start of Making the Cut episode 8's fashion show. Its winning look, like all the others, is already sold out on Amazon Fashion. (Photo by Amazon Studios)

Amazon’s Making the Cut was announced earlier this year as the “first-ever global and instantly shoppable series.” But viewers who tried to buy the winning looks from the designers found: not available. Sold out. Those clothes were no longer for sale even on Friday mornings, just hours after episodes first premiered. In fact, every single piece sold from the first eight episodes is sold out.

That’s prompted a lot of disappointment, and reviews on the pieces often focus on that, rather than the actual clothes, as people use the reviews to complain, including some that have blamed Heidi Klum and Tim Gunn personally, even though they’re not involved.

The winning look from episode eight has three reviews, two of which are one-star ratings. “I couldn’t find any size available within 1 day of show. Nothing available on any winning look. Very disappointed!” one review says.

The episode seven look’s one-star reviews include a person who wrote, “Nothing this show makes is ever available.” Another person, who posted the exact same “review” on both the episode 7 and 8 looks, used the lack of availability to claim that the outfits were “Not size inclusive. Nothing larger than an x-small available – tried to buy within 10 mins of episode airing.”

Some reviewers who actually were able to buy and then received outfits from the show, have expressed disappointment in fabrics and construction—ironic for a fashion design show that emphasizes fabric choice and quality.

So what’s happening? Why are they selling out so fast? Will more be produced? I have some answers from Amazon.

Amazon told me that the same number of items were produced for each winning look, although the company won’t release the exact quantity that was produced and then sold. Garments were available in sizes ranging from XX-small to XX-large.

From the beginning, though, Making the Cut said that these would be “limited editions of the winning look from each episode.” But clearly, they’re more limited than demand for them.

The timing of the show—premiering during a global crisis—hasn’t affected the actual production of the dresses and other garments, though it may affect delivery, since Amazon is prioritizing more essential deliveries.

Amazon Fashion has not yet said if they’ll eventually manufacture more of the winnings looks from Making the Cut season one.

An Amazon spokersperson told me, “We’re excited fans have responded to what [Making the Cut’s contestants and winners] have designed.”

The show’s designers are now receiving all of the profit from the pieces that were sold, an Amazon spokesperson confirmed to me. That was a change from earlier plans, though neither designers nor Amazon have said exactly how it was to have originally worked.

“It changed,” Sander Bos told me when I interviewed him after his episode three win.

Amazon, he said, “really have the best interest with us. They changed some things in our benefit in the end, because they know the situation and also the risk of dropping a show in this current climate. … They definitely put in all of the effort. I can only thank Amazon for their professionalism and their understanding.”

Buyers haven’t been thrilled. One wrote a review of Ji Won’s episode-2 white mini dress that said: “I was so excited to receive this sporty little dress; however, what I received was a tragic ‘Wish’ vs ‘Real Life’ tube of polyester scraps, held together with a crooked chain stitch. If the quality wasn’t bad enough, it’s seriously short length would certainly finish her off.”

Others haven’t been thrilled with the translation from runway to store. “The proportions and fit look nothing like Sander’s look, which was perfection. Unfortunately, his design was not translated well into an accessible look. It is just not doing Sander justice,” one reviewer wrote on Sander’s episode 6 wrap skirt.

The designers aren’t responsible for that, as they weren’t heavily involved in the process of getting their clothes produced.

Some of the winning designers told me that they worked with Amazon Fashion on minor changes or fabric choices, but mostly the production occurred outside of their control.

Esther Perbandt said that this is typical for designers who work with a big companies.

“It’s different if you are a designer and you take care about the production yourself—producing it locally, [where you] really know the pattern maker, you choose the fabric,” she said. “This is a totally different story: handing in the design and maybe one sample, and then letting other people decide how to do it. But this is great, and this is how, usually, designers work when they work for really big brands.”