It’s Shark Week » Instead of lying about extinct sharks, Shark Week is doing something even more harmful.
home > Lego Masters 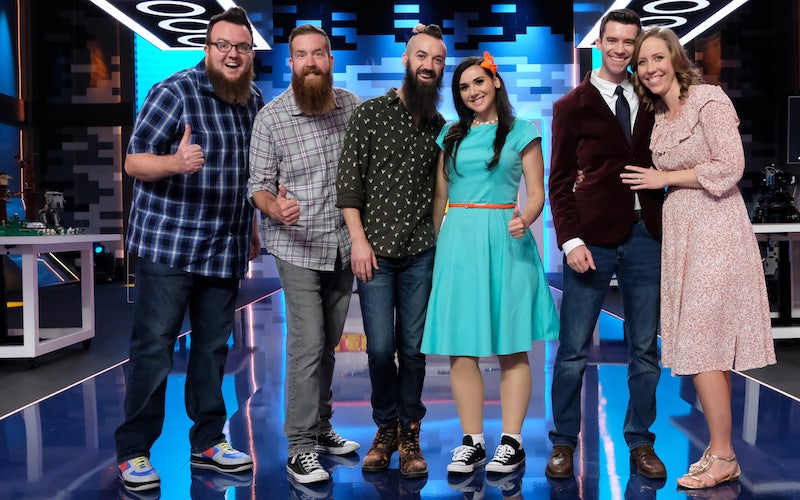 The final three Lego Masters teams during the Star Wars episode, all of whom went on to the finale, because ugh. (Photo by Ray Mickshaw/FOX)

I did not like the Lego Masters winning team. Not because of their frequent chaste kisses, which were performed with the same kind of approach and speed one would use to retrieve an iPhone from a toilet. Not because their pregnancy got more screen time than C-3PO, nor because their cloying sweetness felt less organic than a Lego brick.

No, it was because despite all of that, Tyler and Amy were not a team, in the way that teams are about sharing the spotlight and appreciating each others’ strengths. Oh, also the completely sketchy way they were not eliminated during the Lego Masters Star Wars episode when they had absolutely the worst build, which adds a giant asterisk to their win.

Tyler dressed the part, with his suits and ties, and smiled non-stop, but his language was subtly ugly. “What would winning this show mean to you?” Will Arnett asked Tyler and Amy at the end of the finale. Tyler said, “I feel like I’ve been building almost all my life, and it’s all been preparation for this moment. So having the title of Lego Master would be just the icing on the cake for my Lego journey.”

Contrast that with what his wife and teammate Amy said: “That $100,000 would just mean everything, starting our life together with our baby, and saving for our first house.”

But Amy smiled her way through the series, even when Tyler said at the start of the Star Wars episode, “I’m Han Solo, Amy is my co-pilot Chewie.” Instead of punching him in the temple, or tearing off her mic and leaving him to build by himself, Amy instead made a pretty accurate Chewbacca noise.

Actually, Han Solo and Chewie is not a bad comparison, when considering his ego and and her lovability. Look, many of the teams seemed to have a dominant builder—maybe even a pilot and a co-pilot. But those other teams had more, what’s the word, oh yes: teamwork.

On the team of Aaron and Christian—who seemed to be very likely finalists from the very beginning, thanks to their ambitious builds with intricate details and literal moving parts—Christian’s role quickly became a punchline for Will Arnett and others. He was literally the muscle, with his body on display through his painted-on t-shirts.

Even the team that I thought was essentially created and/or planted to create drama, Sam and Jessica—two people who did not know each other nor had they ever built together, unlike every other team on the show—became more of a team by the end.

Sam and Jessica started as the most annoying pair, both with their behavior toward each other and just by their presence in the competition: they were the only team that did not have a pre-existing relationship, so it seemed like a transparent attempt by the producers to bring drama.

Yet by the end, when they answered Will Arnett’s question, they spoke emotionally about their time building together and learning from each other, and I believed that they’d grown close.

“We wouldn’t be here without each other—like, you’ve made me a better builder. You focused me when I needed to, when I was full of self-doubt and scared. I’m so grateful we got to have this together,” Sam said.

Jessica said, “My proudest moment was when you found it in yourself to really believe in yourself, and it was really special. And I wouldn’t have done this journey with anyone but you.”

Honestly, in that moment, I didn’t catch how both of them essentially talked about Sam’s journey, and his building, not Jessica’s, which is some bullshit, too. That’s because I was caught up in what felt like an emotional moment. They turned toward each other. They talked to each other. How funny that they seemed to have more affection and connection than the married team.

Let me now pause to point out that I have yet to discuss anything anyone actually built out of Lego during the finale. My bad! But I’m just following Lego Masters‘ lead.

All three final builds were impressive, though very different: Sam and Jessica’s peacock, Mark and Boone’s Artopia, and Tyler and Amy’s metaphor for their impending parenthood.

So why did Tyler and Amy win? Eh, who knows! Lego Masters didn’t bother to give us any reason for the judges’ decision. They did offer critiques of each final build, but it was more of the same incoherent judging. (If they’d said “story” one more time, I was going to fall apart like Aaron and Christian’s tower.)

Those viewers who think Tyler and Amy won for their storyline and that Mark and Boone were robbed are, well, absolutely right, at least about being robbed. Mark and Boone built a freakin’ ode to creativity on a show that was supposed to be about creativity and imagination. Maybe if they’d announced they were having a baby together, they would have been real contenders.

Tyler and Amy did some impressive work, including their finale piece, but the show also diminished their work by giving it less attention than the minifig that’s on its way. Just look at headlines and coverage from places like People, which wrote: Parents-to-Be Tyler and Amy Take Home the $100,000 Grand Prize in LEGO Masters Finale. Oh look, nothing about what they built at all!

Perhaps that’s what Lego wants here: a straight and middle-of-the-road couple to be the momentary faces of the brand to inspire other straight couples to buy Lego for their spawn.

But it points directly at the biggest flaw of the first season of Fox’s Lego Masters: its focus on its characters over actual Lego construction. Reality TV shows are driven by humans, of course, but in a competition about creativity and building, that should always come from the builds.

The scale was just wildly out of balance here, with Lego bricks just coming together by magic while the editing worked overtime to create Real Housewives moments, like with its frequent use of reaction shots from the teams—looks that were clearly taken out of context and just being inserted to suggest that whatever we just saw was such a big deal all the teams looked over in horror.

There were some dramatic moments related to the actual Lego builds, but the actual Lego part was forgotten. During the “Mega City Block” episode, Aaron and Christian’s super-tall building collapse when it was being moved. Holy shit! But why? Was that a design or construction flaw? Did they choose the wrong bricks? Just an unfortunate accident?

If you care about Lego and building with it, Aaron Newman, from Aaron and Christian, has written in detail about each of their builds, complete with detailed photographs.

I really appreciated its playfulness as a show—which arrived through the filter of Will Arnett, so those who find his persona grating would not have found a lot to love here—and its gentle mocking of reality TV conventions. But I wish Lego Masters hadn’t forgotten the Lego and building parts of its Lego building competition.