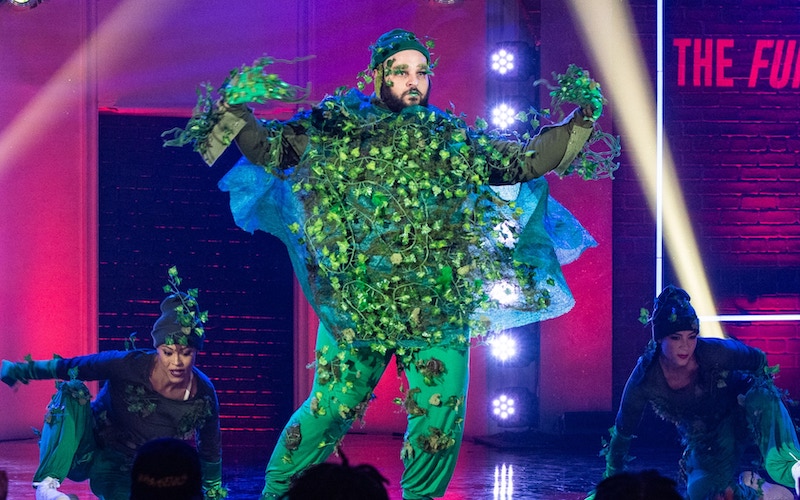 Daniel Franzese dances to Bananarama's "Venus" in the April 1 episode of The Funny Dance Show.

The Funny Dance Show has a simple premise: comedians dancing. We’ve seen this on Dancing with the Stars before—comedians and others with no dance skills attempting to dance—but they’re actually attempting accurate ballroom dance, even on the rare occasion when their routines are comedic.

Technical mastery is not the goal of E!’s new helpfully titled dance competition. The Funny Dance Show (E!, Wednesdays at 11) offers performances that are more slapstick than specialized, and it’s an ebullient party of a show, a fun hybrid of Nailed It! and NBC’s I Can Do That, on which celebrities attempted things they could not do well.

The series, which premiered in mid-March, has its origins in a live show, Stand Up 2 the Streets, created by Justine Marino and Heidi Heaslet at The World Famous Comedy Store. In their E! adaptation, which is produced by Ugly Brother Studios, Justine and Heidi each lead a team of two comedians.

That results in six dances, three from each team: a solo; a duo; and a final trio dance where Justine and Heidi join the two comedians on their team and attempt to incorporate some kind of challenging move.

The dances are at their best when the choreography, song, and performance all contribute to the comedy, which is not attempting anything more than silliness. The comedians are helped tremendously by lights and back-up dancers, who distract us and offer support, kind of like DWTS’s pros do.

In one episode, Maz Jobrani leaned onto one back-up dancer’s arms while the other made his shirt flap, as if he was flying through the air. Earlier, he flung a pretend baby across the stage, pretending to be a guest on a fake daytime show called “Who’s The Daddy.” All of this was set to ‘NSync’s “It’s Gonna Be Me.” Was that dancing? Who cares: it was hilarious.

The Funny Dance Show is the Nailed It! of dancing not because they’re failing miserably—though some comedians really do fall on their faces, mostly metaphorically— but because they’re trying and having fun even when they have no real chance of success or perfection.

The contestants are comedians, so they’re always doing bits, and joking non-stop in their interviews.

This can be exhausting in other contexts but it works fine here, especially when it’s breaking the fourth wall (“those are cameras”), winking at or outright mocking reality TV conventions, or just playing around. At the end of his solo in the first episode, Flula Borg reads along with the teleprompter.

Here are some of the comedians and their pairings:

They get judged by a panel of judges: The Real‘s Loni Love, comedian Justin Martindale, and So You Think You Can Dance contestant/all-star and Dancing with the Stars pro Allison Holker.

The only thing that was missing for me is lip syncing—not to turn the show into Lip Sync Battle, but because they’re dancing to recognizable, buoyant pop songs in choreographed, narrative routines full of props and sets, it almost seems odd that no one is actually singing. And occasionally the comedian contestants do mouth a few of the words, which makes that even weirder, like a Drag Race lip sync that is going terribly awry.

The stage on which they dance is small, and might almost feel a little boxed in from all sides, without a lot of space for the dancers to work with. But it gives The Funny Dance Show a cozy feeling: people hanging out, goofing off, having fun, and making the best of what they have.