It’s Shark Week » Instead of lying about extinct sharks, Shark Week is doing something even more harmful.
home > networks > PBS 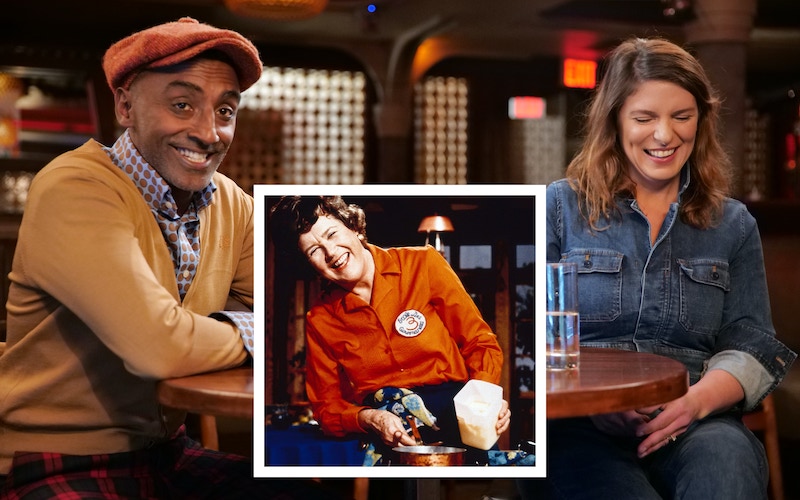 I’m not unfamiliar with Julia Child, but I realized last weekend—to my great embarrassment—that I have never really watched her actual TV show. I’ve never fully appreciated how accessible she made cooking, and how much of a mess she made while cooking.

I’ve seen Julie & Julia and replayed the “Keep On Cooking” remix dozens, maybe hundreds, of times, but I don’t think I’ve ever seen an episode of The French Chef. That means I’ve watched Dan Aykroyd’s hilarious parody from a 1978 SNL episode far more than I’ve watched Julia Child on TV.

Thankfully, PBS has brought back her show, but with a simple and delightful twist. On Dishing with Julia (PBS, Fridays at 10, and streaming), chefs you’ll recognize from Top Chef and Chopped, Food Network and PBS, gather to watch episodes of one of the earliest cooking shows: The French Chef with Julia Child.

I have never fully appreciated what a pioneer Julia Child was, not just as a chef who wrote books and cookbooks, but as a television personality. And I certainly didn’t realize how she embraced imperfection and improvisation, and made it possible to both appreciate and attempt gourmet cooking at home. So this new series has been a really fun education for me.

The first two episodes of Dishing with Julia were very different: Eric Ripert and José Andres reminisced about the times Julia Child visited their restaurants. They also also analyzed the show, offering appreciation for how Julia is basically working live to tape, with very few edits or cuts, and how cooking shows today are not as patient and really rely on editing.

It’s been more than 55 years since the original series premiered, but all of the things PBS says here remain true today:

“She was quirky, yet charming. Unpolished for television, yet irresistibly whimsical. Her kitchen was brimming with new ideas and was also the site of many on-camera faux pas. Her producer frequently employed a cue card that read ‘Stop gasping.’

But Julia Child was devoted to the art of French cuisine. And starting in 1963, The French Chef single-handedly taught a nation of Shake ‘n Bakers who didn’t know their Boeuf Bourguignon from their Bouillabaisse how to cook well, eat well and drink well. Sometimes all at the same time.

From humble beginnings in a makeshift studio that had no running water and was located inside the Boston Gas Company, The French Chef changed palates and cooking habits across America in two hundred informative and unforgettably entertaining episodes broadcast on PBS.”

In the other episode of Dishing with Julia that premiered last week, there were two pairs watching and talking Julia bake bread in “The Good Loaf”: Sara Moulton (who started in food TV working on Julia’s show) and Carla Hall, plus, in different location, Marcus Samuelsson and Vivian Howard.

The result is nearly perfect: a way to re-visit an old show, learn from Julia Child, and also see how she influenced chefs we know—and television.

These are half-hour episodes, which means Julia’s episodes are condensed to allow time for the conversations. Most of that editing just seems to fast-forward—say, past a lot of kneading—so not much is missed. I was frustrated once or twice with split screens where the chefs today are talking over something I wanted to hear Julia say. That was more pronounced in the Andres/Ripert episode, “The Whole Fish Story.” But the full episodes are also available.

Alas, there are only six episodes of Dishing with Julia. Other chefs that are appearing are Martha Stewart, Jacques Pépin, and Rick Bayless.

There are many, many episodes of Julia’s shows, and I’d bet there are other celebrity chefs who would have insightful things to offer while watching Julia cook, so I hope will return for more merry mess-making from Julia.

In the meantime, I’ll have to go watch more of The French Chef.