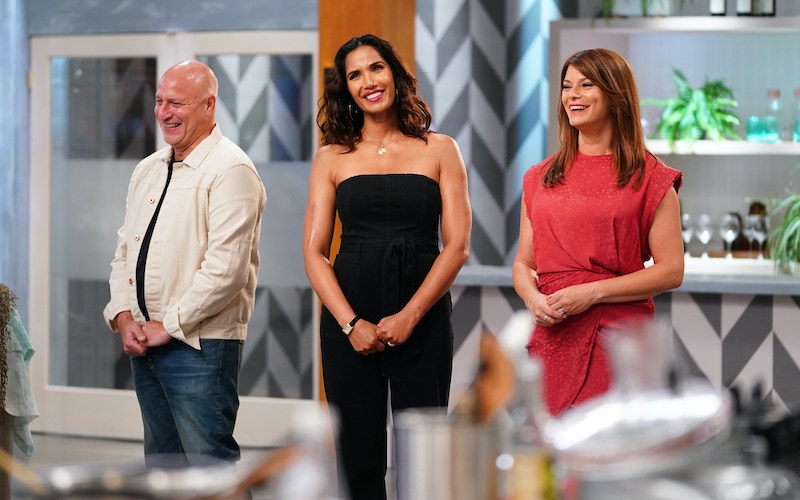 The Top Chef gang is back together again: Gail Simmons is back at the judges’ table alongside Tom Colicchio and Padma Lakshmi, and they’re judging an exceptionally strong group of 15 contestants, some of whom we’ve seen many times before, and some of whom I needed a flashback nudge to remember why they stood out.

Yet they’re all in a season that hasn’t yet recognized how amazing this is. It’s not Survivor: Winners at War—these aren’t all winners, after all—but I was ready for a similarly epic battle, and there’s also very little sense that Top Chef: All Stars LA thinks its second all-star season is special.

“These guys have come a long way since season three,” said Brian Malarkey said upon seeing the new kitchen set. “We were like, in a covered wagon in the olden days compared to this,” he added.

The editors cut to a shot of Top Chef Miami’s barren kitchen: a logo on the wall, some stainless steel tables, ovens along one wall, and a big, expansive concrete floor. It’s totally sad compared to the bright and airy new Top Chef kitchen, which has a kind of lanai (I’ve been watching a lot of Golden Girls) and wall of plants, plus a smorgasbord of vibrant decorations.

Brian was right: the show really has grown up, and the production design is much better and much more fun to look at. But I’d argue this also works as a metaphor for the show’s evolution: back then, it was just a blank kitchen.

Now, it’s a kitchen filled with unnecessary things to distract us from the cooking. At least, that’s how the premiere felt overall: moments of humor and great potential packed within some unfortunate choices.

The show’s prize has been increased to $250,000, but the show hasn’t risen to the occasion. Even filming in Los Angeles seems uninspired, the easy choice.

The actual start, after the super-tease of the season, was awkward. Has there ever been a more underwhelming introduction of a group of all-stars? They just stood in a line outside the Griffith Observatory, which got more fawning attention than they did, sweeping drone shots and low-angle shots with it reaching into the sky.

While it’s been a year since I’ve seen Top Chef, it felt like Bravo really Bravoed the heck out of this premiere, there were so many bowed cymbal whines and other cheap post-production ploys OMINOUS DRUMBEAT. And then there were the first two challenges.

Are these the best challenges for an all-star season of Top Chef?

I realize Top Chef is fundamentally about putting chefs into absurd situations and under great pressure to see if they can still deliver outstanding, beautiful dishes that will please the most discerning palates. But the challenge design in this first episode didn’t help the chefs re-introduce themselves or their food.

Both the quickfire and the elimination challenge were team challenges, and both were unnecessarily complicated. The mis en place relay wasn’t done in teams; instead, the order individuals finished resulted in their team assignments for the quickfire challenge.

Kevin Gillespie hilariously described the mise en place tasks—preparing artichokes, peeling oranges, cracking almonds—as PFTS, which he defined as “people for that shit. I’ve got people for that shit.” Of course chefs should know how to do the things their junior cooks do. But is that the best way to test an all-star? (I did love Lee Anne’s comment after several guys asked for checks—causing everyone else to freeze in place—despite not actually have completed the task. “There’s a lot of premature check from the boys,” she said.

The last group of five had just 15 minutes to cook, and the first two teams had no idea when that third team would arrive, so the new Top Chef kitchen was a flurry of activity. And that allowed us to see virtually nothing of the individual chefs at work, just flashes here and there: Joe holding sheets of pasta he couldn’t possibly cook in time, Lee Anne waiting in line at the fryer.

The winning team became team captains for the second team challenge. Their challenge: create three cohesive seafood dishes, served family style, cooked only over an open flame and with no other tools except their knives.

The seafood was laid out on a table, and the chefs had to charge the table and fight each other over to get the protein and quantity they wanted. Is that the best way to find a winner for Top Chef’s second all-star season, by seeing who can grab the most scallops first?

For an example of how this played out, let’s look at how, in both challenges, Lee Anne Wong was tripped up not by her own creativity or abilities, but by the constraints introduced by the challenges. She was in that final group for the quickfire, and basically got screwed because the deep fryers weren’t available, causing her tempura batter to sit for too long, and resulting in under-fried artichokes.

Perhaps she should have improvised and changed her plan, though with 15 minutes, that’s a tough ask, or perhaps Top Chef All Stars should have enough equipment for the chefs to be able to cook.

Meanwhile, while cooking over a fire on the beach, she made a dumb mistake and put fish on an non-oiled grill surface, causing the fish to stick—and then she dumped oil on it, causing the fire to flare up and char the fish.

She clearly made a mistake, and knew it. But also, cooking on an open flame, at the beach, is one thing. But also having three chefs share a small grill while trying to make a cohesive menu in the sand and sun: is that a challenge designed to push and test contestants, or to make it easy to fail?

Considering how wildly underwhelmed the table of judges and guest judges was by most everything, the producers got what they wanted, or at least what they created.

The new cooking competition Tournament of Champions has aired two-thirds of its season, and I can’t quite believe I’m writing this about a Food Network competition hosted by Guy Fieri, but that series shows more reverence to its chefs, and challenges them in a more respectful way. Its all-star chefs—who include several Top Chef alum—cook with a time limit and other constraints, but producers aren’t running out and trying to trip them at every turn. And it’s also just fun!

Meanwhile, Project Runway returned to Bravo last year as a refreshed, brightened show. It had a major cast shake-up, never mind a network change and a new production company taking over, so it was time for a makeover.

While that new Project Runway felt modern and fresh, Top Chef somehow feels creaky, even given its vibrant cast. I’m thrilled to have Top Chef back, and the premiere was still a fun watch, just one that feels a surprisingly stale after the reinvention of Project Runway, the individualized competition of Tournament of Champions, and the pomp of Survivor: Winners at War.