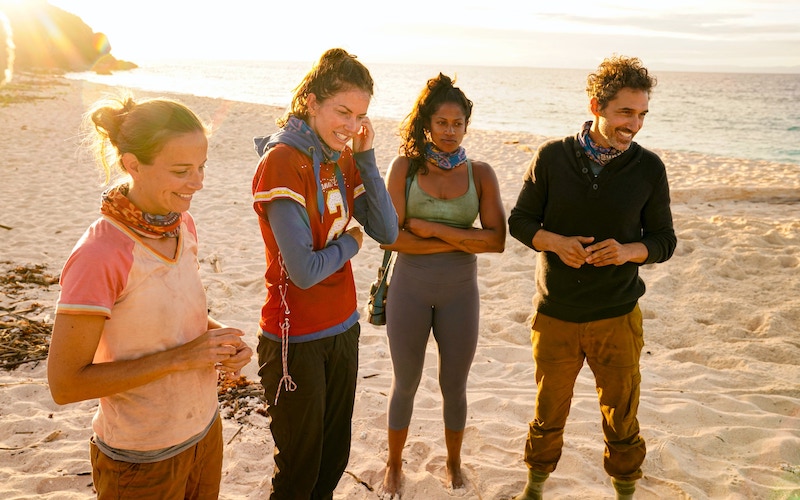 Two remarkable, shocking things happened during Survivor Winners at War episode four: A tribe voted out someone most players identified as a legitimate threat, and I both laughed and cried thanks to events at the Edge of Extinction, which is still a terrible garbage twist that I’m thrilled is not returning but delivered a hell of an emotional wallop this week thanks in no small part to its newest inhabitant, Ethan Zohn. And the episode even ended with perhaps its best comedic button ever, when the new castoff showed up and made an innocent comment.

Last week’s vote of Ethan left Adam isolated by Jeremy and Michele, who basically punished him by leaving him out of the loop for the Ethan vote while still targeting one of the three power players (Rob, Parvati, and Ethan).

Adam owned this immediately: “I just did everything that you’re not supposed to do in Survivor, and I had the hubris to think I could get away with it,” he told the camera, and on the beach, he said, “I was just castrated in front of everybody” and “I pooped my pants tonight.” No need to share that last part, Adam—the vote was humiliating enough!

Facing threats to their games, Adam responded by becoming the world’s most helpful and annoying tribemate, while Boston Rob decided to try to crush him by lying to Jeremy and Michele that Adam was still trying to talk strategy with them.

On the one hand, genius! On the other hand, if Jeremy and Michele didn’t see right through that, and the editing didn’t just leave that out so we’d have some possible intrigue, I just can’t with that tribe being drawn in by the tractor beam that is Boston Rob Mariano.

Of the many incredible things happening during Survivor: Winners at War, one of the most fascinating is how certain players are just repeating what has always worked for them. Boston Rob directly challenges and/or intimidates people, which didn’t exactly work until he was finally cast on a season of doves who just deferred to him all the way to $1 million.

Sandra’s strategy of “anyone but me” is still a legitimately good strategy, since you need to make the best move for you in the moment. But watching her say that out loud three times last night—including at Tribal Council!—was mind-blowing. “As long as it’s not me. I just want to go with the majority,” she said, and the response was basically, Yeah, sounds good. Queen stays queen for now.

Despite the attention on Boston Rob and Adam, their tribe ended up safe and spared from going to Tribal Council. They won the immunity challenge, thanks to—and I’ll quote Jeff Probst here—”ONE OF THE BIGGEST! COMEBACKS! IN THE HISTORY! OF THE GAME!” shits himself

Earlier, the Dakal tribe had such a lead that Probst described the challenge as a “AN ABSOLUTE DISASTER” pees himself But Sele came back and crushed Dakal, even though Nick had successfully assembled this exact same puzzle during his season.

By the way, Sandra sat out this challenge and tied for the all-time record of challenge sit-outs, so I wrote about that and why Sandra sitting out multiple Survivor challenges is allowed.

The challenge sent Dakal to Tribal Council for just the second time, breaking up the love fest that happening at their camp. Yul identified it as an “illusion” of camaraderie.

Tyson, knowing he was a major target, tried to deflect attention from himself and target Nick, “one of these unconnected players”—i.e. people who haven’t made Survivor a career.

Tyson wanted to rally the other repeat players (Sandra, Sarah, Tony) to take out one of the first-time returnees (Nick, Sophie, Wendell, Yul). I loved the moment when Tyson couldn’t remember Sophie’s name, and turned it into a compliment about how under-the-radar she is.

From Yul to Sandra, though, everyone was ready to take out Tyson. They weren’t going to Sele this up, keeping around one of the biggest threats.

Tony did argue for keeping Tyson, and did a better job articulating why that’d be a good idea—basically, Tyson is a shield for other high-profile players like Tony, and Sandra—than the other tribe has done in explaining why they keep declining to vote out Boston Rob or Parvati. (Sandra gave the episode its title when she said, “I think he’s fucking dangerous. I like revenge, but at the end of the day I like $2 million even more.”)

The problem with the shield strategy is that it’s most effective after the merge, when the game becomes more individual, but there’s a lot of game before then, including next week’s tribe swap. Take the opportunities when they come, I’d say.

And that’s what the tribe did: they voted for Tyson, and sent him to the Edge of Extinction—though they also left Nick on the outside of that vote, as Nick voted for Kim. Curious!

Meanwhile, the Edge of Extinction got an extended amount of time for its latest challenge: an offer of a fire token for any inhabitant who transferred 20 pieces of firewood from the top of the island to their camp.

Ethan said he thought this would be a “piece of cake” after the first trip, but as Amber said, “nobody knew what 20 trips was going to feel like.” Danni said she’d compare it to childbirth.

I actually wish the show had actually given us a better sense of the distance and elevation, and specifically the time. How long did each round-trip take? They had all day, until sundown, to complete the task, which seems like a really long time, but of course, if a round-trip took an hour, that’s a different story.

The trek was clearly brutal; you could see the effort and exhaustion on everyone’s face with each log they hurled onto their pile at their camp. Natalie—who’s going to win her way back into the game, isn’t she?—finished first, and then Amber and Danni.

Ethan started strong but faded about halfway through, and suddenly needed medical attention. Oddly, the editing skipped over what exactly prompted that; we went from him slipping on a rock to being treated. The medical team member basically said he could continue, he just needed to take breaks so he wouldn’t faint.

During this time, Ethan talked about pushing himself, and about everything he’s been through, especially surviving cancer twice, and it was really moving. (Watch the scene on YouTube, where it’s titled “Ethan’s Fight to Survive.”)

Ethan kept going, and when he walked up the stairs the final time, and the other three joined him—they made an extra trip just to support Ethan!—I lost it. It was such a human moment, and though there was a game-play reason (a Survivor fire token), that faded far into the background.

Logically, I want to argue that the challenge was a blatant attempt to wear them down and create an emotional moment, and that it’s absurd an episode of Survivor spent so much time with players who’ve been voted out of the game.

But I was just swept into the whole scene, which was absolutely the best content that Edge of Extinction has ever delivered.

And all of that emotional energy faded away until we were reminded of it when Tyson arrived at EoE, and gave the episode its perfect button: “Dude, you guys have so much firewood,” he said. I assume that’s when they all picked him and carried him to the top of the stairs and threw him off.