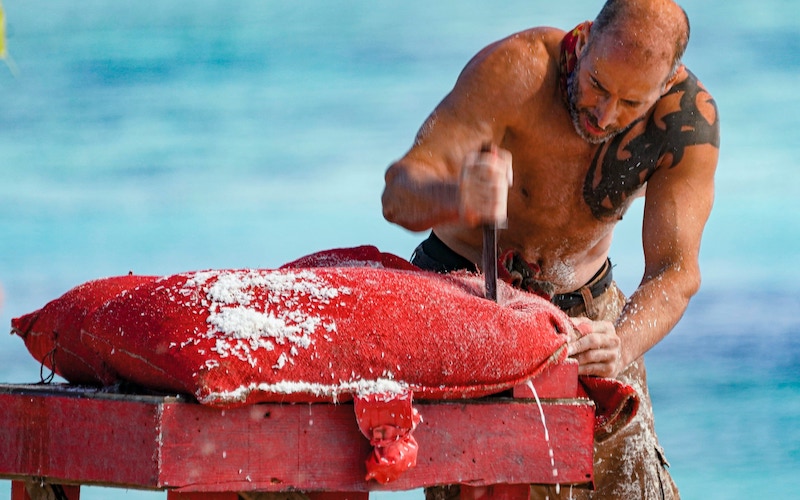 Splitting Survivor: Winners at War’s two tribes into three resulted in an absolute bloodbath for the highest-profile players: Boston Rob Mariano, Parvati Shallow, and Sandra Diaz-Twine were all voted out in subsequent Tribal Councils. Typically, I might be annoyed at the tribe switch for creating these micro-tribes, but it produced some wild entertainment this time.

And what happened tonight in the two episode-six Tribal Councils completely blows Boston Rob’s blindside out of the water. It was literal jaw-dropping television, especially Denise’s taking the queen crown from Sandra and then stabbing her with it—metaphorically, of course.

Let’s get the Edge of Extinction out of the way first, which the episode smartly did. A clue arrived and Tyson figured out that the new fire token was hidden somewhere the tide would come in and out, and pretended to pee so he could grab it without Rob noticing. Funny, and perhaps in another episode, a high point. But compared to everything that followed it, this scene was mostly forgettable.

By the way, we really don’t need to spend more time on the Edge of Extinction, but I’d really like more details about how the transactions work. Tyson sold an immunity idol nullifier to Parvati, and then bought peanut butter. All of this happened in private. How does that work? Do they get their offers and sales during confessional interviews? Is there one producer who facilitates these transactions?

On our still-split tribes, Adam was “really nervous” that he’d be the next to be targeted after blindsiding Boston Rob. But Sophie pulled out a win for the tribe at the immunity/reward challenge, sending the other two tribes to Tribal Council, and effectively ignoring the Yara/green tribe for the rest of the episode.

At the challenge, when Jeff Probst announced that Boston Rob had been voted out, he crumpled to the ground and started rocking back and forth and moaning No! Not my Robbie! You all are terrible players! I HATE YOU! Oh, I kid Jeff Probst. But he did make sure to point out that the other tribes’ response was “the biggest reaction by far of the season.” Narrator: Eh.

During the middle part of the challenge, I could barely watch the contestants stab away at the bags of rice they’d carried through a water obstacle course. After Probst pointed out that it was a “very sharp knife,” and as Ben, Jeremy, and Tony violently stabbed away, I was convinced someone was going to cut themselves. And having recently put my finger into a hedge trimmer, I am very sensitive about these sorts of things.

There were no injuries, thankfully, but there was a lot of stabbing. “I’ll stab everyone in the back. I’ll stab ’em in the front,” Wendell said at his Tribal Council.

And earlier in the episode, Nick said, “Somebody’s going to get backstabbed and screwed over.” That turned out to be an understatement.

Parvati and Wendell face off

“I’m just hoping she doesn’t pull a rabbit out of a hat,” Wendell said of Parvati, who’d recently acquired a rabbit in the form of an immunity idol-cancelling advantage. Wendell, Yul, and Nick were planning to vote off Parvati.

That ultimately happened, but it was a bumpy road to that vote, made even more complicated by Michele and Parvati’s bond, and Michele and Wendell’s history. Nick didn’t want to vote out Parvati, but said he’d prioritize his alliance with Wendell and Yul.

Parvati and Michele discussed trying to wedge Nick out from between Wendell and Yul, but Michele decided this was futile, so she went to pitch her ex. But it was an odd offer: She basically said, How about I vote for you, and that way I’ll get more fire tokens when Parvati is voted out?

This may seem a little nuts, but through the lens of their past history, I can see why she’d want to be like, I’m voting for you even though it doesn’t matter because you suck. “He still doesn’t trust me,” Michele told the camera, but she also doesn’t trust him. “I was the one who got burned. So why would I move forward with somebody who I’m giving giving giving and they’re taking taking taking?”

As if that conversation wasn’t awkward, Parvati and Wendell then basically pitched each other, and their distrust was so visible I’m surprised CBS didn’t blur it out.

Wendell did offer Parvati fire tokens to vote for someone else, and Parvati announced that was her in: “That is all I need to turn the spotlight away from me,” she said in an interview, and then told Nick, who did not seem thrilled.

The awkwardness continued at Tribal, including a moment when Wendell basically made his offer again but wanted Parvati to actually say a name, which she wouldn’t do. “Are you going to say a name? You’re going to wait for me to say a name?” she asked.

Ultimately, it was just Michele and Parvati versus the three guys, who voted out Parvati 3-2. While obvious, easy votes sometimes don’t offer much intrigue leading up to them, this was not one of those.

And the lead-up to that vote didn’t even have a player hiding in the bushes for hours and hours, only to spy on exactly no one.

Yes, Tony’s spy shack was back, but this one was so subtle and hidden that no one came anywhere near it while Tony was hiding there, perhaps because they could predict exactly what he was doing.

“Let’s talk somewhere different,” Sandra said at one point, and Kim said the water well is “where it was last time.” And this time, too! If only Tony’s top-secret spy shack locations hadn’t been broadcast on national television.

But while they’re allied with a man who spent most of the episode under dead palm fronds, Sandra and Kim (plus Tony) had an original Dakal majority and were looking to vote out either Jeremy or Denise.

An easy vote, maybe. But Sandra did something far more aggressive than is usual for her, and that was her downfall: While she was agnostic about who was getting voted out, Jeremy or Denise, she made an offer to Denise: a nearly-dead immunity idol (it only lasted three Tribal Councils, and that meant this was the last opportunity for it to be used) for two fire tokens.

Denise said yes, but only gave her one fire token, promising the other for when they returned to camp.

Once again, Survivor’s newcurrency was actually being spent!

AT Tribal Council, Sandra voted for Denise, saying she knew Denise was safe, and “this is all for show.”

Sandra was right about one thing: Denise was safe, because she played an idol for herself. Then, saying, “Jeff, can you give me one more minute?”, produced her second idol and played it for Jeremy, who put his face in his hands, perhaps because he’d just voted for Denise.

As it turned out, every single person voted for Denise—except, of course, Denise, who case the single vote that sent Sandra to the Edge of Extinction, using Sandra’s own idol against her. All hail the new queen.