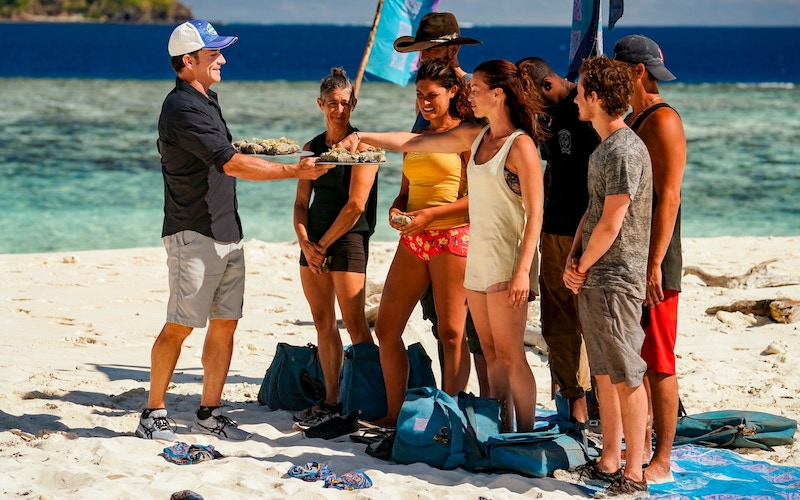 Survivor Winners at War began with a story of friendship and connection and real-life survival, and ended with an incredible blindside, with a tribe swap/split spawning new alliances in the middle. It was quite the arc, with this season delivering again.

Oh, and also, “the wicked witch is dead,” as Adam says in the preview for next week’s episode. Yes, a tribe finally voted out Godfather figure Boston Rob Mariano 🎉🍾, whose rather effective strategies for controlling people seemed to be working, until they were not.

First, though, the episode opened on a more somber note, though one thematically connected to the rest of the episode.

Yul shared that, from his previous Survivor experience, he’s only stayed connected with Jonathan Penner, and become close with his family, including Jonathan’s wife, Stacy Title.

Stacy is now suffering from ALS. It’s “an absolutely devastating knock-out punch,” Yul described it, breaking down both at the tribe camp and later when he talked about Stacy in an interview.

Last year, Vulture profiled Stacy and her efforts to finish directing a film, and I highly recommend the story.

After the first commercial break, Jonathan Penner and Stacy Title both appeared in a pre-recorded message, in which Jonathan said, “we found new meaning to the word ‘survivor.'” CBS sent viewers to cbs.com/survivorALSinfo, which encourages people to donate to the ALS Association.

Early this morning, Yul tweeted a way to help Jonathan and Stacy directly:

If you’d like to provide direct financial support to @SurvivorPenner and Stacy’s family (i.e., help them with their crippling financial burden), you can give on their personal giving site: http://stacyandjonathan.com

Before the actual swap, Rob foreshadowed his exit, saying, “This is the part of the game that I really don’t like too much.”

“I had complete control of the game,” he said about his first season, Survivor Marquesas, and “the next thing you know, I’m on the bottom, and that was the end.”

“Hopefully this time, the cards fall in my favor,” Rob said. They did, but not really: Rob ended up on a tribe with a majority of his original tribe, but unfortunately for him those two people were Adam and Ben, two people on Rob’s original tribe who were ready to vote Rob out before the game even started. (It seems rather clear—but I’ve not yet seen confirmation—that this was yet another tribe shuffle/split/swap that was controlled by production so as to evenly divide the two original tribes. After all, Probst had two platters of buffs, probably one for each tribe.)

Sophie and Sarah were technically in the minority on Rob’s new tribe, and also didn’t really trust each other, meaning this was a tribe of essentially five free agents. But Sophie and Sarah quickly bonded, especially when Sophie found the camp’s hidden immunity idol, which required her to give half to someone else to power it up or whatever.

Sarah considered playing her steal-a-vote advantage to even out the 2-3 imbalance, but she ended up not playing it, which is good because she certainly didn’t have to.

Rob’s strategy to keep himself safe was to 1) make a pact with the men that they wouldn’t vote each other out (they still did, oops) and 2) convince them to stay together as a trio for the whole day, so there could be no strategizing.

This was awkward, and attempt to control them seemed to work. But in retrospect, knowing the result of the vote—unanimous, except Rob, of course—it seems like that day at camp was even more awkward than it seemed, since they all secretly knew what was going to happen and were just waiting around to send Rob to Edge of Extinction.

He’ll join Amber, his wife, and also five other players from early seasons. The kids from the most-recent seasons are getting rid of the earlier players.

Going from two tribes to three meant three smaller tribes, and fewer places to hide. But it also gave us all kinds of fun new pairings and interactions, whether that was Nick confessing his high-school crush on Parvati or Michele telling Parvati, “Let’s give them something to drool over.”

Considerable time was spent on one past relationship: Michele and Wendell, who briefly dated, though Michele called it a “saga.” “You’re stranded with me now,” she told Wendell, and neither of them have ever been more awkward on this show.

Wendell explained that “we kicked it before,” and that led to one of the best Survivor tweets I’ve ever seen. Sarah tweeted to Wendell:

“when we got home from filming I told my husband we were on the same tribe ‘just kicking it’ now I have some explaining to do.”

Wendell’s explanation of the larger forces at play was more detailed: “This is the season of, like, histories and past relationships—that could be the theme of this season.”

It could, and I’m so glad the production is leaving that in. It’s definitely been part of past seasons, too, but the show has been reluctant to acknowledge any part of the game that’s off-camera, so it’s largely ignored those relationships and bonds.

On the other new tribes, Jeremy, Sandra, Kim, Denise, and Tony are together, where Jeremy and Denise are in the minority, but Jeremy identified Kim as a potential “weak link.”

The new Dakal tribe—let me pause for a second and say that the one thing I like least about tribe swaps is keeping track of where everyone is, and the fact that I didn’t have the original tribe names or even colors memorized makes it even harder. So when Probst or others talk about Dakal, I’m like, Which one was that? Who was there? What color is that tribe’s buffs? And now that there’s new Dakal and old Dakal and some Dakal at their old camp, I have to keep looking at a cheat sheet to remember who is where. It’s less hard on a returnee season, since I already know the cast; on seasons with new players, forget it! Alas.

Anyway, the new Dakal tribe introduced their two newest members, Jeremy and Denise, to the impressive shelter that Wendell built, which is impressive—almost as good as the shelter Rob “built” and where he and Sandra “lived” on Island of the Idols.

Tony made it clear that his strategy is still to keep the big threats around, and he did so with a highly entertaining metaphor. “If the lions go against one another, the hyenas are going to come in and just clean up shop, and I don’t want to get eaten by a hyena,” Tony said.

Future Survivor seasons are in limbo due to coronavirus, but if this season is the only one we see this year—or decade!—I’d be okay with that.