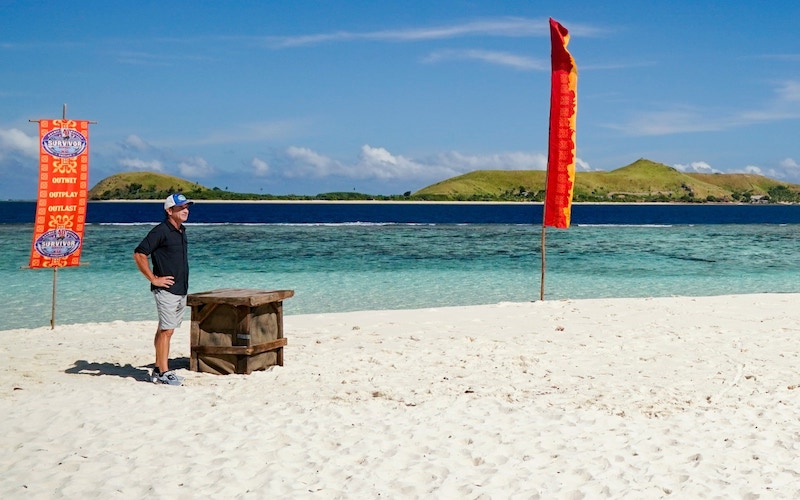 Survivor host and showrunner Jeff Probst at the start of a challenge on Survivor Winners at War, which was filmed in Fiji, just like Survivor seasons 41 and 42 will be—whenever production resumes. (Photo Robert Voets/CBS Entertainment)

Survivor season 41 has postponed filming, with showrunner and host Jeff Probst notifying crew members this week that production on Survivor 41 wouldn’t start until May, which is when Survivor 42 would have begun filming. Both seasons have been cast, however.

CBS said in a statement that “the plan is to return to production on May 19th” but noted that’s “pending worldwide events.” The statement called this a “precautionary measure,” and added that “The health and safety of the castaways and production members is our top priority.” (Oh.)

The CBS reality competition’s typical filming dates are March, April, and May for the fall season, and May, June, and July for the spring season. Survivor 41 and 42’s location is still the Mamanuca Islands in Fiji, which is now Survivor’s permanent home. The production’s base camp is the Mana Island Resort, which the production completely rents out for four months every year.

The Hollywood Reporter’s Josh Wigler broke the story, citing a note to crew members from Probst, which said, in part:

“Due to the growing short-term uncertainty surrounding the global spread of COVID-19 and the corresponding desire for the continued well-being of our amazing crew, we have decided to push back our start date for Survivor season 41. Though Fiji has no reported cases and is beautifully remote, our crew numbers over 400 and are flying in from over 20 different countries, creating a need for more time to fully analyze and create our new production safety plan. This situation is unprecedented and we are learning more information every day. It is out of concern for the well-being of all of you that we have taken this step.”

With crew members just learning of the cancellation, I heard about this last night (and was working today to confirm for a story), as anxiety among crew members spread. Most are freelancers, so they are effectively out of work for now, as those crew members who were working on The Amazing Race 33, which stopped filming in February due to concerns about COVID-19.

Some of the Survivor crew is already in Fiji. The show staffs up slowly, with some production team members arriving months in advance to lay the groundwork—physically (like building Tribal Council) and otherwise—while a majority of the crew (like producers, camera operators, sound mixers, contestant handlers) arrives shortly before production begins.

Coronavirus has just been declared a pandemic by the World Health Organization. I’ve found the website FlattenTheCurve.com to be extremely valuable in explaining what we can all do right now to stop the spread of a virus that’s 10 times more deadly than the regular flu, and that includes social distancing.

While there are no confirmed cases of cornavirus in Fiji right now, that will be helped by Survivor no bringing hundreds of people from around the world to the island. Fiji has closed its borders to travelers from certain countries, including Italy and China, but not to others, though the country’s web site says “[a]ll international air passengers are being screened with handheld temperature scanners prior to entering the country.”

I’ve contacted the Fiji Film office, which coordinates productions, to see what they’re recommending, and I’ll update when I hear back.

The Survivor 41 and 42 casts have been chosen

Both seasons 41 and 42 just completed their casting, according to an Instagram post by William Yelton, who began on Survivor as a Dream Team member, and is now identified as a casting editor.

On March 6, Yelton wrote, “Season 41 & 42 casting officially wrapped. I might be biased but I think once again our team delivered!”

Will those casts change now that production has been delayed? Perhaps, though the casting process always identifies alternates, potential replacements in the event that contestants have to drop out.

How might this affect airdates and the broadcast of Survivor this fall? The show typically films its seasons in order, with the season filmed in March, April, and May airing in the fall, and the season that films in May, June, and July airing in the spring.

But in 2015, Survivor reversed that. Survivor Cambodia: Second Chance filmed in the summer, but aired just a few months after production completed. That was because its cast was voted on by viewers and announced during the Survivor Worlds Apart live finale in May 2015, and it would have been weird to announce that cast, and then make everyone wait until spring to see that season, while another new cast was announced for the fall season.

That year, Survivor: Kaôh Rōng, which had filmed in the spring, was held until the following spring. A version of that schedule would work this year, with the season that starts production in May airing this fall, and then the spring season filming later in the summer.

But that assumes that we’ll have a coronavirus all-clear by mid-May, and at this point, no one knows what will happen.