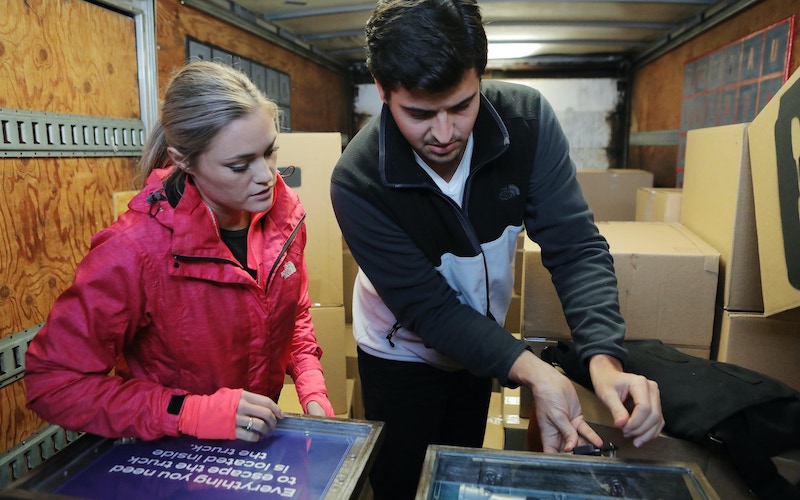 Chelsey Mori and George Jackson try to free themselves from the back of a truck on Spy Games episode 7. (Photo by Josh Stringer/Bravo)

Bravo’s Spy Games hasn’t exactly been a hit: last week’s episode had about one-third of the viewers of its lead-in, Below Deck: Sailing Yacht, though it did get better ratings than Watch What Happens Live, which is probably significantly cheaper to produce, based on how awful it is.

Spy Games wasn’t perfect, as I detailed in my review, nor has it popped as a show. But I think that’s because it didn’t know what it was, and after seven episodes, has clearly established its strengths, and makes it deserving of a second season. There’s an excellent competition series here; it just needs a few tweaks.

The key to Spy Games is the challenges, because that’s where actual spying takes place. Every time a challenge let the contestants practice forms of espionage—of course, watered-down, civilian versions of espionage training—is thrilling.

These kinds of challenges alone justify a second season, because they’re so different and full of possiblity.

The absolute highlight of the season for me was the challenge in episode three, “Breaking and Entering.” Teams had to follow someone and then break into her house. (This was, of course, entirely created for the show. Do not try this at home.) It required the contestants to think on their feet and respond to what they were seeing, navigating a strange space while trying to conceal their prescence.

Last week’s penultimate challenge was also a great one, especially the box truck part. After learning cyphers, the remaining contestants split into pairs, and had to solve a series of puzzles. One of those took place in the back of a box truck, which started driving around once they got inside.

Even better, there was a twist: while there was a cypher on the walls, and letters painted onto boxes, the actual solution was a key taped to the ceiling, and their instructions, which said, “Everything you need to escape the truck is located inside the truck.”

During another episode, contestants were tasked with going on dates while using fake identities, and it was fascinating to see how they responded. Chelsey’s date was an obnoxious, arrogant guy, and she let that get to her, rather than using it against him. Of course, she also wasn’t trained to do that, either, and it obviously didn’t occur to her.

One of Spy Games big weaknesses has been the way it was cast. George makes excellent, frustrating television, whether he’s sneaking around and eavesdropping or just being frustrating, but is he spy material? Does even want to learn this stuff?

Moreover, there’s just a general awkwardness and stiltedness to the cast. The final three—Brock, Christina, and Chelsey—seem like very nice people, but also don’t seem like the three best potential spies. It’s more like they’ve survived while the other contestants dropped off. Does it matter which one of them is the winner? Has the show established one as more adept at spying?

Few of the cast members seemed prepared for an espionage-themed competition, which is the fault of casting, not the contestants themselves. It’s also difficult to cast the first season of a brand-new competition reality show, especially one that is going through an identity crisis.

How Spy Games structure and challenges should change

Not all challenges have been that successful: The obstacle course on “Mind Over Matter” just seemed like a second-rate Survivor knock-off obstacle course from a 2000s-era reality show, and its connection to spying and espionage felt really flimsy.

The original idea for the show was a World War II-era program where civilians lived in a house and were trained to be spies. Yet even though that was Spy Games’ inspiration, the actual show wandered away from that. There was woefully little training this season, followed by hit-or-miss testing.

The more real-world the challenges were—going on a date, breaking into a house to steal a USB drive—the better television they were. The other challenges, like lock-picking in a warehouse, could be used for practice.

Maybe each episode could have two challenges: a practice and a real-world one. Maybe also I’m insane to suggest Bravo would pay more for a second season of a low-rated show! Maybe they can save money by dropping a host, because Mia Kang had absolutely nothing to do and what she did do was absolutely nothing.

What I’d love to see on Spy Games would be this format:

That’s not far from what some episodes gave us. And it’d sure make better use of the assessors—Douglas Laux, Erroll Southers, and Evy Poumpouras—and their expertise than having them stand around and pretend as if they’re watching live feeds of the contestants at all times.

If Bravo really does want conflict and interpersonal drama, even from this kind of competition show, one way to get more of that is let it emerge organically in challenges: force the contestants to work together or give them different roles, let them compete against each other as individuals or in teams.

Spy Games season two could also introduce some kind of game element, like letting them vote for the bottom two. (Or perhaps that’s a terrible idea! I’m not convincing myself.) In season one, though, the contestants created alliances even though there was no strategy required, and that just made all of their strategizing and plotting against other people seem pointless and petty.

What’s clear to me from the first season is that Spy Games was going to be one kind of show, and then Bravo Bravo-ed it up, making it less like The Mole and more like The Real Housewives. There is nothing wrong with a good Housewives, but we sure do have enough of those.

With these kinds of tweaks, Spy Games would fall somewhere between talent-based competitions Top Chef and Project Runway and personality-driven non-competitions such as The Real Housewives and Below Deck.

It’d also have more of an identity: an espionage competition reality show, not just a watered-down version of a RHONY murder mystery weekend in the Berkshires.

Recommended for you: Spy Games: a review, plus interviews with an assessor and a producer