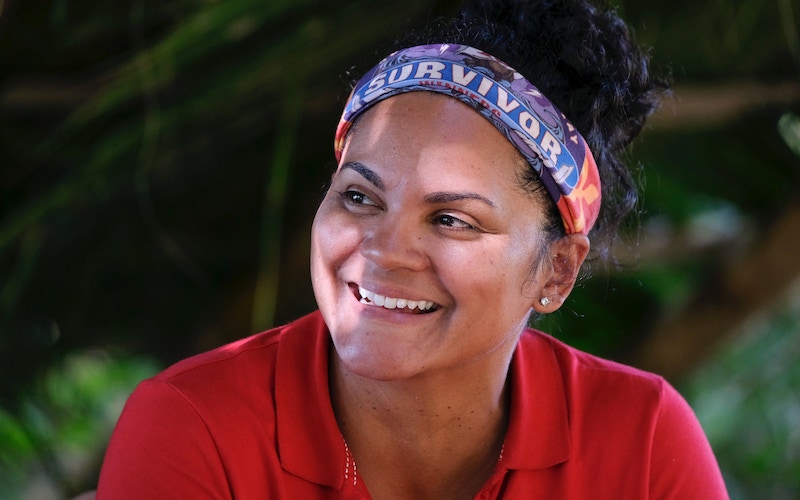 Sandra Diaz-Twine on Survivor: Winners at War's second episode, on which she did compete in a challenge, though she has now tied the record for all-time challenge sit-outs (Photo by Timothy Kuratek/CBS Entertainment)

As of the fourth episode of Survivor: Winners at War, Sandra Diaz-Twine has tied Courtney Yates for the number of challenges they’ve each sat out, and it’s possible Sandra will soon hold the record. But how is it that Sandra is able to sit out challenge after challenge?

During the “I Like Revenge” episode, Parvati Shallow even called out Sandra for her repeated bench-sitting, when host Jeff Probst asked who would sit out the challenge. “Sandra, you didn’t even hesitate raising your hand,” he said, and then Parvati quipped, “You going to rename her bench, Jeff, ‘The Sandra Bench’?” Sandra was not phased: “I like that name. Oh no, she’s not hurting my feelings!”

Sandra’s decision has been getting criticism (and worse, thanks to toxic fans), and she defended her sit-outs in a Survivor discussion group on Facebook:

“I sit out because my tribe always wants me to sit out. So when we get out there to the challenge we already know whose sitting out, And what’s best for the team. I’m not a track star. I don’t run marathons. I’m not an Olympian. Im not a super hero. I don’t coach CrossFit. I’m an average middle aged mother. God didn’t give everyone muscles He gave me Brains. That’s why I sit out! So I use my Brain and win TWICE. While others use their muscles and lose. I’m sorry if me sitting out affects you SO MUCH. Please forgive me. The Queen Stays Queen….Adios”

First, players have to sit out team challenges when tribe numbers are uneven, and Survivor viewers are familiar with what host Jeff Probst says in those situations. He asks who will sit out and then adds a key part, something like, …keeping in mind that you can’t sit out the same player in back to back challenges.

According to True Dork Times’ very useful Most challenges sat out – career chart, there are now two players who’ve skipped 12 challenges, including Sandra sitting out the “Beyond the Wheel” challenge on episode four.

However, Courtney has sat out about 32 percent of her challenges, skipping 12 of 38 challenges in just two seasons, while Sandra has now sat out 12 of 61 challenges, just shy of 20 percent over her four seasons playing.

Upon hearing that her record was about to be tied, and perhaps soon surpassed, Courtney tweeted, “This is an outrage – my record was achieve by doing the least in only 2 seasons!”

So how is it that Sandra can sit out challenge after challenge? The key is back-to-back challenge rule does not apply to challenges in different episodes.

In the early years of Survivor, there were two challenges in each episode: a reward challenge and an immunity challenge.

But in recent years, especially since Jeff Probst took over as Survivor’s showrunner, elements have been dropped in order to save time (the title sequence and theme song, for one example) and allow more time for character development, strategy talk, and dumb twists like that infernal Edge of Extinction.

Now, in early episodes, we get just one challenge: a combined reward/immunity challenge.

And since there is just one of those each episode, a player can sit out as many of those as they want. It’s only when there are two challenges in an episode that someone can’t sit out twice.

Here’s another thing: Sandra has participated in 48 challenges, far more than she’s sat out.

Even though she’s participating in some challenges, and even helping her tribe win, some fans and viewers are still mad at Sandra, as if choosing to sit out means she’s not playing.

It’s just part of her overall strategy of not being a target. If she’s not in a challenge, she can’t screw up the challenge and make herself stand out—at least, even more than she already does as Survivor’s only two-time winner. The queen knows what she’s doing, and the rules allow her to do it.