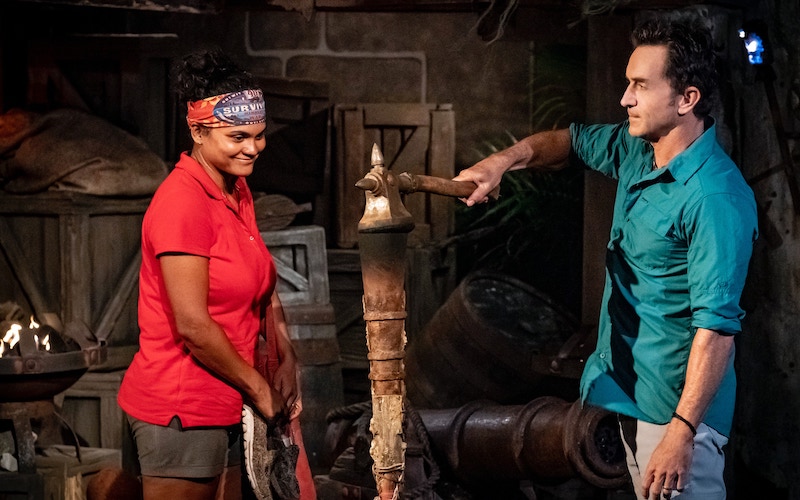 Evidence that Sandra Diaz-Twine did not quit Survivor: Winners at War: her torch was snuffed by host Jeff Probst. (Photo by Robert Voets/CBS Entertainment)

Sandra Diaz-Twine was voted out of Survivor: Winners at War on its sixth episode. At the start of its seventh episode, she was transported to the Edge of Extinction, where she made the decision to leave and not participate in the (presumed) challenges that would give someone a chance to get back in the game.

Somehow, this has led to Survivor viewers and fans and even some publications labeling her a quitter, and declaring her action as quitting the game. Neither is true; in fact, it’s the complete opposite of quitting.

Why does Survivor hate quitters so much?

First, let’s look briefly at why there is animosity and general disdain toward quitters, which I certainly have shared in the past.

Why does that exist? Well, Survivor created and perpetuates it.

This began with the very first person to quit, Osten Taylor, who voluntarily exited during Survivor Pearl Islands. CBS called Probst’s reaction—which was not to Osten’s face—his second-most “epic burn”: “people work too damn hard to stay in this game and fight to stay alive. And he wants to lay his torch down?”

As the seasons have gone by, Probst’s disdain for quitters has become more prominent on television. When Colton Cumbie quit Blood vs. Water, Probst spent a considerable amount of time shaming him, and even accused Colton of faking an illness during his previous appearance on Survivor. (For details, here’s what I wrote about that episode.)

Why the on-camera shaming? Here are my theories as to why the show doesn’t like quitters:

It’s worth noting there have been exceptions to Probst shaming and dismissing quitters; one notable episode during Survivor Nicaragua gave lots of attention to its two quitters.

Sandra left the Edge of Extinction, but she didn’t quit Survivor

First, Sandra’s exit was preceded by something that already irritated some viewers this season: Sandra’s and her tribe’s decision to have her sit out challenges. Whether or not you agree with the decision, it was perfectly acceptable in the game.

Also, while Sandra now has the highest number of challenge-sit outs for her Survivor career, she’s only sat out about 21 percent of the time, meaning she was in four-fifths of the challenges she faced. The person with the second-highest total, Courtney Yates, has a 32 percent sit-out rate.

Not participating in a challenge doesn’t make Sandra a bad player. It actually makes her a strategic and smart player, just as choosing to walk away from the Edge of Extinction and its nonsense is perfectly rational, reasonable, and allowable under the rules of Survivor.

Because she’s Sandra, she described her decision to leave the Edge of Extinction with flair: “I have no interest in running up the mountain for a little scoop of rice, sleeping in a raggedy shelter, being bitten by rats. I don’t want to deal with it.”

She also admitted something she’s made clear before: “I’m not very good at the challenges.” How many of us are able to admit to our shortcomings like that?

Do you call someone a quitter for not playing the lottery? No. You might even call them smart. Oh sure, it’s possible to win the lottery, but there’s only a minuscule chance. Most likely, you’re going to waste that dollar you spend on a scratch-off or those $2 you spend on Powerball.

Of course the odds on Edge of Extinction are much better than most lotteries—yet it’s also not just random chance. Instead, it’s a skill-based competition that does not involve any of the strengths and attributes that allowed Sandra to win Survivor twice.

All of this is bullshit. It’s not even factually accurate.

Likewise, the Edge of Extinction has players who’ve been voted out and are out of the game; their advantages are nullified and they go there to await a potential chance to re-enter. So you can’t quit the game if you’re on Edge of Extinction, because you’re already out of it.

Even if you want to argue that Edge of Extinction is part of the game, especially now with fire tokens in play, Edge itself has a mechanism to leave. It allows people to opt out—by raising a sail. The regular Survivor game does not have anything like that.

Of course, anyone can leave the regular game, but it’s not like each tribe has a walkie-talkie for a contestant to pick up and call for a boat to pick them up. Jeff Probst doesn’t start every Tribal Council with, Anyone want to leave?

To summarize: Sandra was voted out. She chose not to bother with the Edge of Extinction, a choice offered to her by the Edge of Extinction. She exited, and did not quit anything, at least not in the pejorative sense of the word that Survivor has established for those who give up in the middle of a season and stop playing.

Sandra played, lost, and went home. And bravo to her for that.

I haven’t agreed with a lot of what Jeff Probst has said or done with Survivor in the past few years, but even he offers an unqualified defense of her to EW, and does not label her as a quitter as the story’s headline does:

“… There was 0.0 chance that Sandra was going to win a challenge against the group of players already assembled on the Edge. We all know that Sandra does what Sandra wants, and Sandra wanted to go home. I don’t think it changes her legacy in any way. Sandra is a legend. She is connected to so many iconic Survivor moments.

When we are casting new players, Sandra is often referenced as an inspiration for why people want to play because she showed you could win this game even if you’re not a physical player. And Sandra did one other thing for the past 16 years… she said yes every single time we called. I wouldn’t even get the words out and she would say, ‘YES! Whatever it is, YES!’ I’m not exaggerating. She had no idea what we were going to ask, she didn’t care. She always said, ‘Survivor has been good to me, and I’ll be here whenever you need me.’ So after 16 years, if Sandra is done, I’m good with that. Goodbye to a true one-name Survivor icon.”

Yes, goodbye from Survivor, Sandra Diaz-Twine. You’ll always be the queen—even when someone joins you as the second two-time winner.