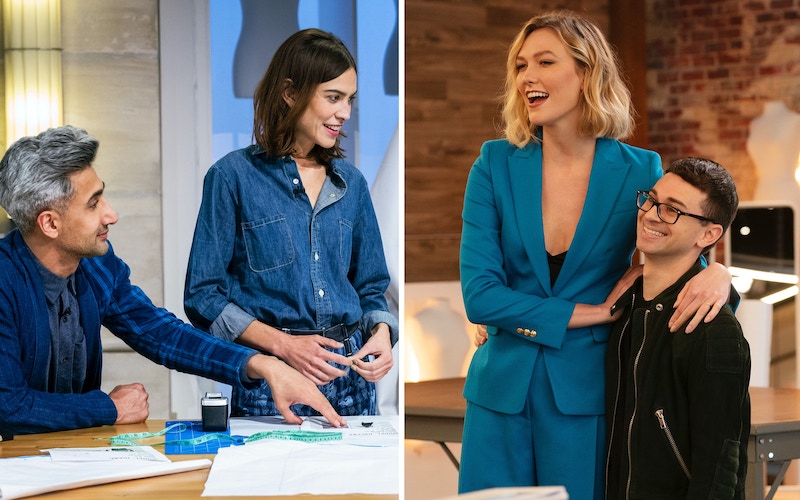 Project Runway is about to end season 18, its second, rebooted season on Bravo, which overlapped with the premiere of Next in Fashion, Netflix’s attempt at reinventing Project Runway.

Although this season of Project Runway had its problems (Sergio, cough cough), it has a kind of internal fire and life that’s entirely absent from Next in Fashion. The contestants on the Netflix show are producing interesting, creative work, but they’re stuck inside a show that sure isn’t trying hard to be the next big thing in reality TV.

Next in Fashion isn’t bad television, but it completely underwhelmed me. And while Project Runway roared back to life last season, tweaked in the right ways, this season Bravo seems to have steered the show in the direction of its slate of interpersonal conflict shows, pulling it back from the heights it reached last season.

Bravo basically announced that this would happen: dropping stylist mentor Marni Senofonte, adding more team challenges, and giving a lot of attention to mean-kid behavior, particularly the cruelty toward Nancy. Even the editing played that up: When Nancy got praise, it’d cut to people looking annoyed, and reaction shots like that may or may not be used out of context.

Meanwhile, I don’t exactly understand how the judges ended up with half of the final four. Sergio has repeatedly been all but accused of plagiarism by the judges, never mind his empty and offensive political messaging. Yet there he is in the finale! Also there is Victoria, who is clearly talented but produced nearly the same outfit every week while dismissing everyone else as inferior. (I did love her reaction to the week that the judges decided to eliminate no one.)

I’m glad the production gave mentor Christian Siriano the ability to save someone, and he’s really been the star of this season, fully coming into the role and making it his own. His mission is similar to Tim Gunn in that he wants the designers to do better, but his approach and methodology couldn’t be more different, and results in a kind of hyper-exasperation.

Runway’s challenges have stuck to the show’s playbook, though leaving the soundstage for the fashion show at New York City’s Vessel was a high point: a dramatic, visually stunning location that also had some comedy with height-averse judge Brandon Maxwell hanging out on a lower level and watching through his opera glasses.

When it’s working, and it usually is, Project Runway just has a zip to its step that is rarely matched in reality TV.

Next in Fashion had challenges with simple themes: streetwear, undewear, activewear, denim. Turning toward this kind of simplicity could have been a direction for the show to take, but that choice ended up making the competition feel a little boring and rote, and as forced as those Tan France and Alexa Chung intros.

I’ve read more than a few comparisons between Next in Fashion and The Great British Bake-Off in terms of its tone and niceness, and I just don’t get that. Sure, Alexa Chung and Tan France start each episode with a little bit that introduces the week’s theme, and yes, there are moments of camaraderie with and between the contestants. But that’s about where it ends for me.

If your goal is to celebrate talent and not create artificial drama, you do not pair designers and make them work in teams for more than half the series, and give those teams one day only to produce multiple outfits.

That’s simply a recipe for drama, and that’s what Next in Fashion delivered. Perhaps it doesn’t exploit conflict in the same way a more desperate cable network show would, but the decision to pair designers led to more conflict than true creative collaborations.

Also, with 18 contestants, there were just too many people, especially at first, to really develop them as individuals, and I didn’t feel like I was growing more connected to the contestant as the episodes wore on.

Instead of looking at the clothes without the designers present, Project Runway’s judges changed this season to doing close-up inspections only occasionally during the critiques, with the designers standing right there. That ups the tension, but I miss the private critique.

On Next in Fashion, the judges meet with the designers in pairs—so we only see two judges critiques. That offers an opportunity for more in-depth conversation, though it seemed like the episode was always eager to just fly away to the next pair of designers.

During the fourth episode, the streetwear episode, guest judge Kerby Jean-Raymond walked off the set during the final judging because he disagreed with the decision. That led Tan to talk to the designers and break down about how much he cared for them all. I was unmoved—particularly since the end result was a lazy fall-back (that Project Runway did too): a non-elimination episode. Here, it was because the judges weren’t unanimous, and functionally, all it did was push the elimination of Farai and Kiki back to the next episode. Why bother? It’s okay if one judge is doesn’t agree, isn’t it?

There was an opportunity there to explore Kerby’s objections, and to really dig into the specifics about why the other judges didn’t like, say, the unfinished look of Farai and Kiki’s outfits. But the conversations with the judges—both before the elimination ceremony and during it—were shown with a whole lot of sketchy editing. There was a lot of dialogue without showing us a face actually saying those words, which is an indication that the editing is cobbling together a conversation that didn’t really happen.

There’s no question to me that the permanent talent on Project Runway is significantly superior to Next in Fashion. Christian Siriano and Karlie Kloss have both found their way into their roles, and I just love the chemistry of the panel of Nina Garcia, Elaine Welteroth, and Brandon Maxwell.

Tan France and Alex Chung are enthusiastic judges and hosts, but they’ve been given so much to do that they do none of it particularly well. They hang around the workroom like a mentor might, but don’t give forthright or direct feedback. The mostly just ask mushy questions.

Most of Next in Fashion’s decisions—like having two hosts and also making them judges and mentors and perhaps also the people responsible for assembling the runway—are just weird. Meanwhile, the production unnecessarily complicated itself at every turn. The workroom fabric supply closet meant no trips to Mood and also no running out anything, but was so small and didn’t feel like it had a ton of options, never mind the risk of face gashes from falling bolts of fabric.

The actual runway presentation, with the dramatic lighting and LED runways, can look spectacular, but often just pulled my attention from the actual clothes.

Most oddly, the runway was rebuilt every few days. Why? And why does it go in the workroom space? Why does everyone have to finish their work in the cramped backstage? Netflix couldn’t afford a second soundstage?

I think this runway business explains the show well: it’s made a lot of decisions that don’t pay off in any meaningful way. Next in Fashion comes from the same producing team as Netflix’s The Final Table, which also made a lot of choices that just didn’t make any sense.

Is it bad? No. Is it great? Nah. It’s fine, like so many of Netflix’s shows. Given the chance to reinvent or refresh the format, Next in Fashion declined.

Given the chance to continue to continue its trajectory away from the Lifetime version of Project Runway, Bravo declined, though for me its show still has the clear edge in having an identity and a lane that is more clearly defined, even as it steered a little more toward its previous life.

My headline suggests a fight between them, but of course, the world can handle two fashion shows. And they’re certainly both watchable enough. I just want them both to be better, and Next in Fashion has the most room to grow. Like their contestants are so often told, it needs to show us who it is and what truly makes it different.

Will Heidi Klum and Tim Gunn’s Making the Cut do that? We’ll soon see.