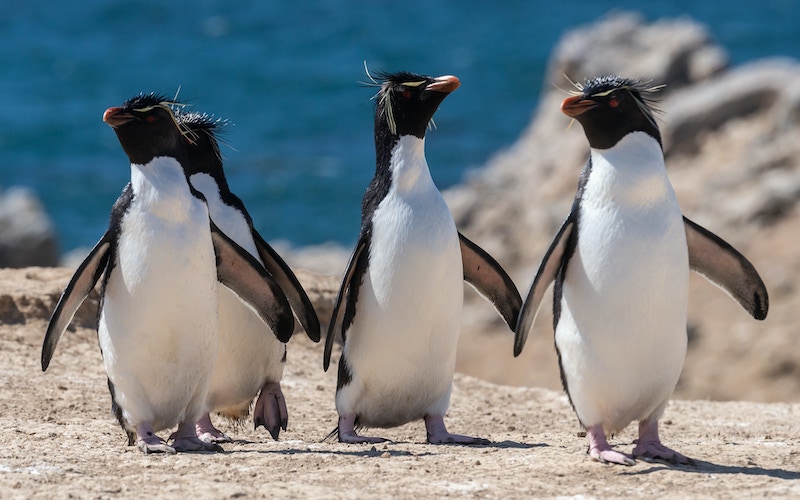 Penguins in the Falkland Islands (Photo by Paul Carroll/Unsplash)

Happy spring! While the world may not feel as bright and cheerful today as it has during past vernal equinoxes, spring arrived earlier than it has in 124 years, so perhaps that portends an early end to other dark, cold days.

This week, several things have infused some much-needed joy into my life, and I share those here with you as recommendations, from a 10-second laugh to subscription-only TV that’s suddenly free to watch.

Also, my list of spring reality TV premieres is here if you need something new to look forward to—like last night’s premiere of Top Chef All Stars—and I’ve also curated a list of mostly comforting, relaxing reality shows you may not have thought to watch.

Judi Dench is the best

This recommendation is 10 seconds long, but it’s 10 seconds you might watch a few times because it’s so perfect: Judi Dench reminding us to “just keep laughing.”

And if you need more of Dame Judi Dench, there’s And Furthermore.

Lots of companies and apps are giving free subscriptions or extended free trials, which is simultaneously self-serving and really nice.

But Starz has just made many of its shows available to stream completely free on its apps or on demand, no login required.

One show that I recommend immediately and without hesitation is Party Down, a 2009 to 2010 sitcom that stars Adam Scott, Lizzy Caplan, Ryan Hansen, Martin Starr, Jane Lynch, Ken Marino, and many other actors you probably know from other shows.

There were only two seasons, but it’s ridiculously funny, and falls roughly into the same category as The Office and Parks and Recreation. It follows a group of caterers who happen to also be aspiring actors, and is just delightful.

Starz has also released several unscripted shows, including Warriors of Liberty City and a 2018 unscripted show that I wish had gotten more attention: America to Me.

It followed students and teachers at a suburban Chicago high school for a year, and as I wrote in my full review of America to Me, there’s a lot of vulnerability and honesty. It’s always focused on the people, but touching on some big themes, too. If you don’t normally subscribe to Starz, now is a great time to watch it.

My fellow TV critic Marisa Roffman has started a new feature on her site Give Me My Remote, and it’s awesome: a Daily Dose of Joy.

Every weekday, she’s posting a clip from a TV show that’s just wonderful.

Yesterday’s was the classic Debbie Downer SNL sketch from 2004 that never fails to make me wet myself with laughter, because watching these comedians try not to break is far funnier than most of SNL sketches.

One of the most immediately awesome things to come out of the unfortunate but necessary closures was footage of penguins wandering through Chicago’s Shedd Aquarium: They just let the penguins wander through other exhibits and the lobby!

Because penguins shouldn’t be the only ones having fun, the Shedd also let a porcupine visit the penguin exhibit.

The videos are charming. I wanted more—just a live feed of the penguins wandering around—and The Kansas City Zoo has delivered. They now have a 24/7 Penguin Cam on YouTube, where you can watch 68 penguins living—and being fed twice daily.

Even when they’re just standing there, it’s far more entertaining than the Big Brother live feeds often are, probably because there are more signs of intelligent life here. ZING!