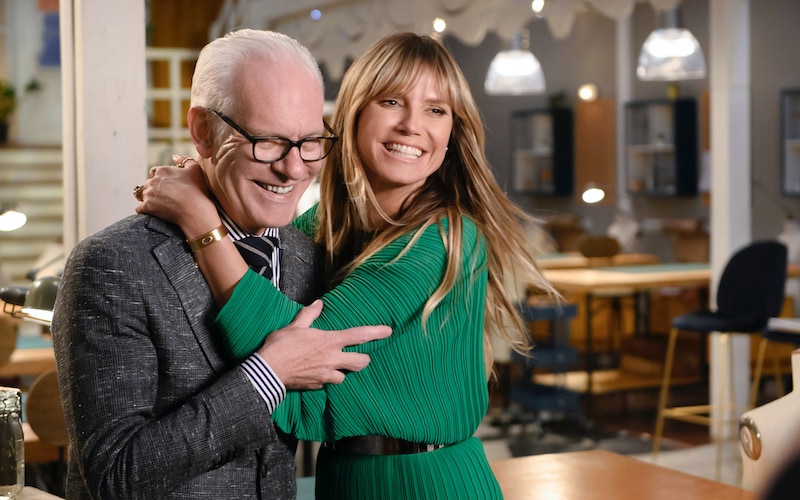 Making the Cut opens with Heidi Klum twirling in the rain and then running toward Tim Gunn, with the Danger Twins song “So Marvelous” playing on the soundtrack. While they both keep walking and talking, Heidi breaks the fourth wall and looks into the camera and effusively starts chatting with us.

There’s so much explosive enthusiasm that it’s like they’ve escaped from cable reality TV prison, and they’re ready to spend some money—Amazon’s money, that is. It’s an exuberant opening to a show that is a breezy watch and full of creativity, though not a reinvention of the form.

Heidi, Tim, and executive producer and showrunner Sara Rea’s “hands were tied for many, many years,” Heidi said at TCA earlier this year, speaking about Project Runway.

Making the Cut has definitely sheared away the minutiae of the clothing-designing process, and replaced it with twirling, cinematic shots of New York and Paris. The designers have seamstresses to sew for them overnight; they don’t have time limits every day. Each runway is in a different, spectacular location, and those locations affect not only the presentation of the looks, but how the judges see and interact with them.

It’s a beautiful watch, and the production is clearly spending Amazon’s money, sometimes in frivolous ways: the contestants are flown to New York just to be flown to Paris, and one even jokes about how close he lives to Paris, and how immigration and customs must have wondered what was going on. (The show will visit Paris and Tokyo for several episodes each, before returning to New York City for its final episodes.)

In their first meeting, Tim tells the designers they’re looking for someone “who can truly build the next global fashion business,” and Heidi says “this adventure is going to be like no other.”

That’s certainly true for Making the Cut, with its bouncy editing and glam shots of cities and sun-dappled contestants sketching while looking at Parisian landmarks. The show itself is irresistibly upbeat. Just watch Tim Gunn do a drumroll that sounds like he’s blowing bubbles in a container of olive oil while Heidi Klum screams “$1 million dollars!” as if she just won the lottery and with a level of surprise that suggests she has no idea that’s been the prize for many major reality TV shows over the past 20 years.

Even the editing is having fun: its visual style feels fresh and new, with letters drawing themselves—and designers’ names and brand names—onto the screen. During runway shows, the screen shatters into fragments so we see the judges reacting at the same time as we see the model walking the runway.

Yet for all its emphasis on being a show about finding a global fashion brand, Making the Cut opens mostly as an adult Project Runway: upgraded, elevated, but with a familiar—perhaps even slightly stale?—core.

“Adult” does not refer to age: They’re mostly in their 20s and 30s. (The youngest, Sander, who’s 24, says, “I don’t believe in like waiting for, like, what—until I’m, what, 30? And I’m all—no offense—dusty and crusty.”) Instead, they’re treated more like professionals, not up-and-comers. They can come and go from the workroom as they please, and go shopping for fabric and supplies whenever (perhaps wherever?) they’d like.

But they still have to make two garments in just a few days: one high fashion, and one “wearable” look. (The winning wearable looks get sold on Amazon; there are far fewer references to Amazon than I would have expected. Two episodes will go live each Friday.)

I’m not sure the show transcends the Project Runway format, though, at least not in its opening episodes. While Heidi, Tim, and the judges talk about brands, there’s little focus on that other than extensive use of the word “brand.” (Executive producer Sara Rea told me that challenges later in the season will focus on other aspects of brand-building, such as marketing and managing a team.)

The show has been well-cast, with a range of personalities and backgrounds and styles, and contestants who come from all over the world. All of them are more established, with their own brands and clearer points of view. Some of them are more assured; others, not so much.

Tim Gunn, meanwhile, does his traditional walk-throughs, giving thoughtful feedback, though not much specific advice. He’s more about motivation and encouragement than critique or ass-kicking, so his feedback lacks what Christian Siriano brings to Project Runway, and Christian’s is a kind of mentorship that I’ve grown to appreciate. Tim’s like the professor teaching the big-picture ideas, while Christian is the TA running the lab.

The central focus of each episode is a designer creating two looks in a limited amount of time, and dealing with the problems that crop up: seamstress issues, fit and finishing problems, styling. It’s nothing new there.

The judging panel is still congealing, and doesn’t quite seem to know what their focus or interaction should be like, so both are a little awkward. Although we’re told this isn’t a sewing competition, but judge Joseph Altuzarra asks of a garment, “Is there any sewing on it?” Heidi Klum, in some ADR edited on top of another critique, says, “This is a design competition. So you have to design clothing, not just wrap fabric around models.”

But I thought it was a competition to find a global brand? Design is part of that, sure, but what are they judging?

She’s specific and unflinching: Seeing one look for the first time, she says, simply, “next”. During one early runway show, Nicole Richie says, “I think it’s done well. The finishes are done well.” Naomi Campbell turns to her and says, with such disappointment in her tone, “Nicole.” (Campbell does have reactions that are not one word, but she’s both exacting and hilarious.)

At the end of each episode, the judges gather the contestants, having already decided who wins and who won’t make the cut. There are no rules here—anyone can go—and Heidi says their decisions aren’t final. “A conversation can change everything,” she says, and then the talk to a handful of contestants. After that, Heidi does a poll: “Okay, judges: Have any of you changed your mind?”

Making the Cut won’t change the minds of people who aren’t fashion competition fans: its DNA keeps it in the same family as Project Runway and Next In Fashion. But for its gorgeous visuals, the reunion of Heidi and Tim (one of television’s best duos, who hang out together in interstitial segments filmed at places like the Moulin Rouge and that are the best kind of fan service), and the creativity in both the clothing and the presentation of it, Making the Cut has made appreciable use of its untied hands.