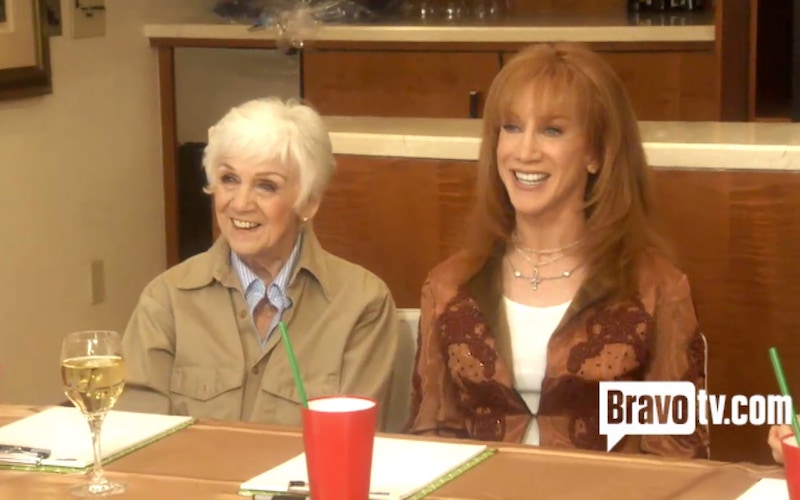 Maggie Griffin with her ubiquitous glass of wine on an episode of Kathy Griffin: My Life on the D-List

Kathy Griffin’s mother, Maggie Griffin, who appeared on Bravo’s My Life on the D-List with her daughter, died Tuesday at age 99. She was the show’s break-out star, for her copious wine-drinking, hilarious quips, and her close relationship with Kathy.

Maggie’s husband and Kathy’s dad, John, was also featured in early seasons of the show, died in 2007 at age 90, and his death was included in an episode.

“My Mom, the one and only, Maggie Griffin, passed away today. I am gutted. My best friend. I’m shaking. I won’t ever be prepared. I’m so grateful you guys got to be part of her life. You knew her. You loved her. She knew it. Oh, and OF COURSE she went on St Patrick’s Day.”

Maggie’s perspectives and behavior was a bountiful source of material for Kathy’s stand-up routines, and that continued on Kathy’s reality TV show.

Besides her love of wine, Maggie was known for her conservative politics and lack of knowledge about technology. Her quips and reactions—especially to things Kathy said—were a central part of the heart of My Life on the D-List, which ran on Bravo from 2005 to 2010 and won two Emmys for Outstanding Reality Program.

Although Maggie and Kathy laughed and clashed over everything from politics to Kathy’s gratuitous sexual references, they always did so with a clear demonstration of their deep connection and love toward one another.

In the 10 years since the show concluded, Kathy used social media to share her mother’s wit and charm with the world—and also, eventually, Maggie’s decline.

In January 2019, as part of a long thread on Twitter, Kathy shared that Maggie had dementia:

A) As heartbreaking as this is, I feel the need to share some important info about my mom Maggie. I’ve always been honest with you all, but this one is really hard. The pic below, taken in September, was the last time I was able to have a proper/coherent conversation with her.

B) Since that photo was taken, she has rapidly fallen into the throes of dementia. This is never easy for any child, I know this is a reality that millions of people deal with every year. But when it comes to my mom this is particularly hard because her sharp mind was everything.

Kathy tweeted that her mother had declined only recently:

C) My mom is 98 and up until this past couple years she was so sharp she always kept me on my toes. Her mind was so naturally quick, funny, and smart. No one could get anything past her. Watching that slip away so fast has been devastating.

D) I want to assure you all that she is not in pain and she is getting the best 24-hour care. In terms of how she is now, at this point she only knows my name and I love you. I know many of you know what that reality is like…I’m still grappling with it.

E) A big reason I’m sharing this news with you is that so many of you have asked why I haven’t posted a video of Maggie & her beloved dog Twinkle in the past few months. Now you understand why we haven’t been able to share anything […]

In that thread, Kathy also shared that she appreciated having the Bravo show as a way to watch moments from Maggie’s life and their time together:

J) I’m so lucky that I have six seasons of My Life On The D list to look back on and enjoy moments of my mom being herself…the Maggie you all came to know and love. Remember the “Faceplace” (aka Facebook) moment?

In 2018, Kathy bought the rights for the show back from Bravo with the goal of re-releasing it on iTunes, but I cannot find it there or anywhere, except for some seasons that are on DVD.