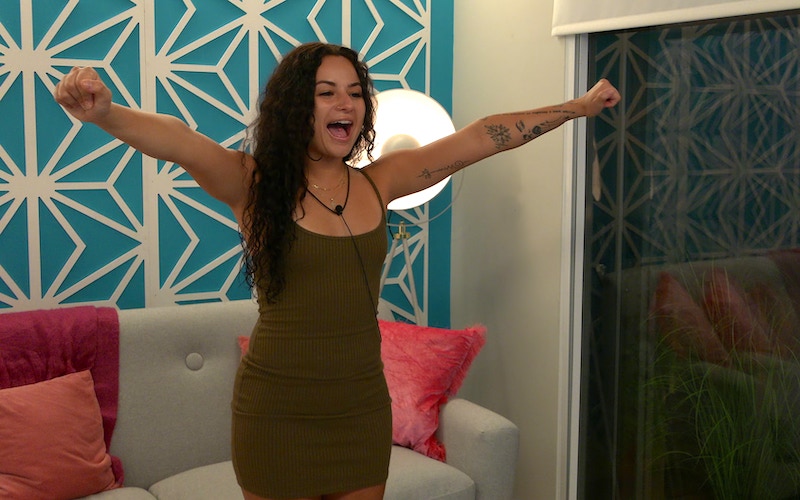 Sammie in The Circle season 1, episode 7 (Image via Netflix)

Netflix has renewed its hit shows The Circle and Love is Blind for two seasons each. Seasons 2 and 3 of each show will be broadcast in 2021.

Also returning: Marie Kondo (though not with Tidying Up with Marie Kondo season two, but with a new series) and also Netflix’s hip-hop competition series Rhythm + Flow.

Marie Kondo’s new show is Sparking Joy with Marie Kondo, and instead of one-off episodes helping individual families, Netflix says “Marie and her team set out to tidy one small town in America, sparking joy in big new ways.”

The show is now casting a city at TidyMyTown.com.

Marie Kondo’s show seemed to be a hit, or at least had a lot of conversation, but with a two-year gap, plus a change in title and producers, it seems like season one wasn’t very successful.

The Circle seasons 2 and 3

The UK series The Circle had broken through before everyone went crazy for Love is Blind (which starts with a thematically similar element).

Nothing is changing, at least not big-picture: Michelle Buteau is returning to host and narrate, and the prize will still be $100,000. Studio Lambert will be producing two new seasons, which I’d guess will be filmed back to back in the UK.

Those seasons are now casting at TheCircleCasting.com.

While they won’t premiere until 2021, there are two new seasons of The Circle on Netflix: Brazil’s version, which is, of course, in Portuguese, premiered earlier this month, while The Circle: France premieres next month.

Love is Blind seasons 2 and 3

Love is Blind has been this year’s breakthrough reality TV hit, so its return is a no-brainer.

Vanessa Lachey and Nick Lachey will return to host for some unknown reason, considering they were essentially useless in season one, except perhaps by using their fame to bring attention to the show.

Love is Blind is moving to Chicago for season two, and is now casting there. It’s unclear when it will actually film, especially given the state of the world at the moment. And Netflix did not say if season three will shift to a third city.

Production company Kinetic Content does move its flagship relationship reality show, Married at First Sight, to different cities each season, so perhaps that will be the case for Love is Blind, too.