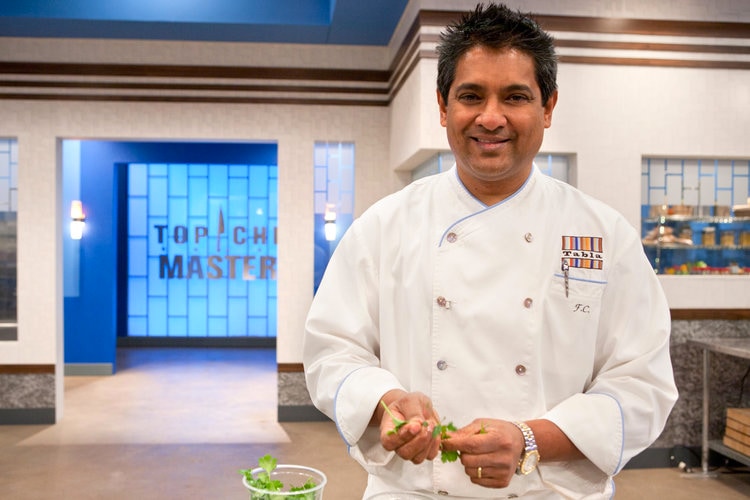 The winner of Top Chef Masters season three, chef Floyd Cardoz, has died at 59 from cσronαvirus. Last Tuesday, he posted to Instagram that he was hospitalized:

“… I was feeling feverish and hence as a precautionary measure, admitted myself into hospital in New York. I was hugely anxious about my state of health and my post was highly irresponsible causing panic in several quarters. I returned to New York on March 8th via Frankfurt.”

“It is with deep sorrow that we inform you of the passing away of Chef Floyd Cardoz (59 years), Co-Founder, Hunger Inc. Hospitality, on March 25, 2020 in New Jersey, USA. He is survived by his mother Beryl, wife Barkha and sons Justin and Peter.

Floyd tested positive for Covɪd-𝟷𝟿, in USA, on March 18th and was being treated for the same at Mountainside Medical Centre, New Jersey, USA.”

Padma Lakshmi wrote on Twitter that Floyd “made us all so proud. Nobody who lived in NY in the early aughts could forget how delicious and packed Tabla always was. He had an impish smile, an innate need to make those around him happy, and a delicious touch. This is a huge loss.”

And Alex Guarnaschelli wrote that Floyd was “A true gentleman in every sense and a great credit to the chef community. He will be sorely missed.”

Bravo said in a statement posted to social media, “Bravo and the #TopChef family are deeply saddened by the passing of Chef Floyd Cardoz. He was an inspiration to chefs around the world and we offer our deepest sympathy to his family and friends.”

Cardoz most recently appeared on Netflix’s Ugly Delicious season two, which was focused on Indian food. He thanked David Chang on Instagram, writing, “Indian food is important to me I am excited We got to tell the story of this amazing cuisine.”

He later said in an interview that he wanted to leave Top Chef Masters early in the competition because of the drama.

His Bravo bio at the time listed his accomplishments:

Floyd Cardoz is the Executive Chef of North End Grill, the forthcoming restaurant from Danny Meyer’s Union Square Hospitality Group. Located in Manhattan’s Battery Park City, North End Grill will be a neighborhood gathering place for the residents of BPC and downtown communities, as well as the business people who work in the financial district and other nearby areas. The menu will feature the seasonal dishes of Chef Floyd and have an emphasis on seafood. Before embarking on this new restaurant, Floyd was the executive chef of Tabla, a groundbreaking restaurant serving New Indian cuisine cooked with the sensual flavors and spices of his native land. With Floyd at the helm, Tabla received numerous accolades including a three star review from The New York Times. The restaurant also spawned an entirely new category of modern Indian restaurants across the country and internationally. After 12 incredibly rewarding years, Tabla closed its doors in December 2010. Floyd began his career in his native Bombay, where he attended culinary school and interned in the kitchen of the Taj Mahal Intercontinental Hotel. To further his classic culinary technique, Floyd moved to Switzerland, and spent his days at the hotel management and culinary school, Les Roches. Floyd later moved to New York, and worked under Chef Gray Kunz of the venerable Lespinasse. During his seven years at the world-renowned restaurant, he rose from Chef de Partie to Executive Sous Chef. In 2006, Floyd wrote his first cookbook, One Spice, Two Spice (William Morrow Cookbooks). In 2009, he launched a line of meals for online grocer Fresh Direct. He is also the consulting chef for El Verano Taqueria located at Citi Field, home of the New York Mets. Actively engaged in the community beyond the walls of his restaurants, Floyd received the Humanitarian Award of the Year Award from Share Our Strength in 2007.

In a 2012 interview with Bravo’s blog, Floyd Cardoz said, “You have to cook from your heart. I cook to what speaks to me and what puts a part of myself in the food. On the show that’s what I did. I put myself in my food every single day.”