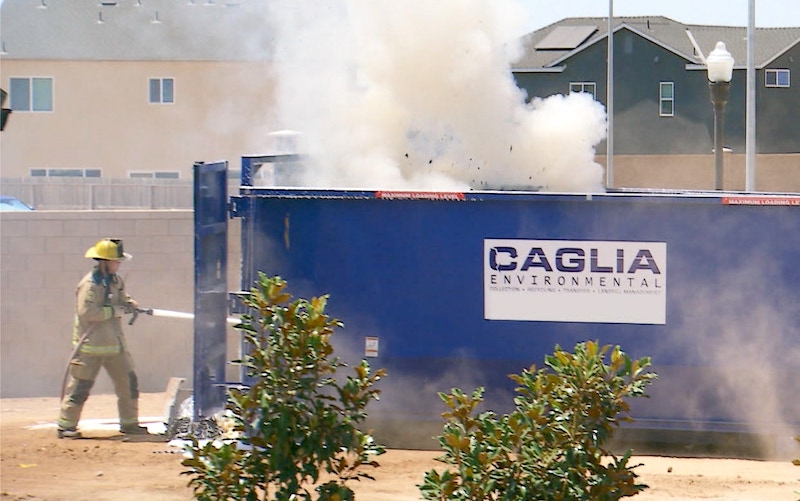 A dumpster fire occurred on Extreme Makeover: Home Edition when rags spontaneously combusted while the team was building a new house for the Reeder Family.

Extreme Makeover: Home Edition is back on HGTV, and the first of two back-to-back episodes airing this Sunday will feature a literal dumpster fire—and, of course, a lot of tears and a heartbreaking story.

Based on what a firefighter says, the dumpster just set itself on fire—watch it below—which is a very 2020 thing for a dumpster to do. In unrelated news, during the second episode that airs Sunday, Ty Pennington returns to the show he once hosted.

Conveniently, the dumpster fire happened while the show was building a brand-new house for a firefighter, so the fire department was actually right there, on scene with a fire truck, when the fire broke out.

“There were some rags that were soaked in wood stain. It will spontaneously combust,” says Cal Fire Chief James Kirkman as the dumpster smolders behind him.

This happened on day three, two days before the family returns. In the clip above, the exterior of the brand-new house and its landscaping all look complete.

The firefighter whose house is being built is Nick Reeder, whose wife died within an hour of giving birth to twins, leaving him to raise three three kids with the help of his mother. Together, they all live in a small apartment, which is why the show is just building him “a brand-new home with a mountain rustic inspired design,” as HGTV says.

The episode was filmed last August, and the Fresno Bee has behind-the-scenes video of the reveal.

Hidden Potential star Jasmine Roth helps out on the build, in addition to the show’s team of designers, Breegan Jane, Carrie Locklyn and Darren Keefe. The new version of Extreme Makeover: Home Edition is hosted by Jesse Tyler Ferguson.

The episode focusing on The Reeder Family, which is numbered 101 even though it’s airing well into the season, is one of two back-to-back episodes that HGTV is airing Sunday, March 8. HGTV described it this way:

“After the loss of his wife, Nick, his mom and three young daughters are living in a cramped apartment and need a fresh tart. With help from hundreds of volunteers, Jesse, special guest Jasmizne Roth, star of HGTV’s Hidden Potential, and the Extreme Makeover: Home Edition designers Breegan Jane, Carrie Locklyn and Darren Keefe will build the Reeder family a brand-new home with a mountain rustic inspired design in less than one week. Jasmine will work with Nick’s firefighter friends to build the kids a firehouse-themed playhouse and will help Darren finish a custom farmhouse table engraved with a personalized family crest.”

The second episode is titled “Renovating a Time Capsule,” and HGTV described it like this:

“…the life-changing renovation for Thom Washington, co-founder of a non-profit mentorship program which inspires at-risk youth and cancer survivor who has fallen on hard times due to health complications. The Extreme Makeover: Home Edition team wants to give Thom’s family a fresh start, so Jesse will mobilize hundreds of volunteers and skilled experts to surprise the family with a total renovation of their dilapidated 1970s-style home. Special guest Ty Pennington, the highly skilled carpenter, craftsman and designer who starred in the original ABC version of Extreme Makeover: Home Edition, will work with Breegan, Carrie and Darren to add midcentury modern features to several spaces in the home.”