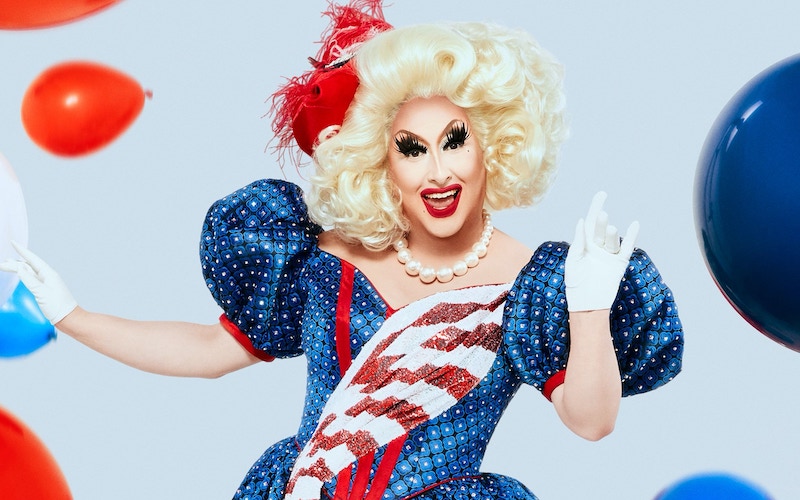 Sherry Pie, who was disqualified from RuPaul's Drag Race season 12. (Photo by VH1)

VH1 and World of Wonder Productions disqualified a RuPaul’s Drag Race season 12 contestant Sherry Pie, whose real name is Joey Gugliemelli, after several men said he pretended to be a casting director and prompted them to create and send “degrading” videos, including one in which an actor masturbated on camera.

Also on Thursday, another season 12 queen, Brita Filter, responded to a 2018 allegation that they’d sexually assaulted someone.

Because Drag Race season 12 filmed in the summer of 2019, production has concluded, though the finale—which is taped in front of a live audience about a week before it airs—has not yet been filmed. (One report included details about Sherry Pie’s performance in the competition; more information about that in the spoiler section below.)

Midday Thursday, actor Ben Shimkus posted to Facebook that he had “a weird story to tell about Sherry Pie,” and detailed how they knew each other and also his interaction with a casting direction, “Allison Mossie,” who turned out to be Gugliemelli. Shimkus wrote, “I experienced massive emotional trauma. I consider the following months to be the lowest time for my mental health.”

BuzzFeed News reported on this late Thursday night, after talking to “five aspiring young actors” who interacted with Gugliemelli when he was “posing as a casting director who led them to submit embarrassing audition tapes of themselves saying and doing degrading things.”

The people Gugliemelli catfished include “his former classmates at SUNY Cortland in New York, as well as actors he worked with in a Nebraska theater company,” BuzzFeed reported.

Gugliemelli didn’t respond to BuzzFeed News during its reporting, but posted a note on Facebook one minute before the story was published. It said:

“This is Joey, I want to start by saying how sorry I am that I caused such trauma and pain and how horribly embarrassed and disgusted I am with myself. I know that the pain and hurt that I have caused will never go away and I know that what I did was wrong and truly cruel. Until being on RuPaul’s Drag Race, I never really understood how much my mental health and taking care of things meant. I learned on that show how important ‘loving yourself’ is and I don’t think I have ever loved myself. I have been seeking help and receiving treatment since coming back to NYC. I truly apologize to everyone I have hurt with my actions. I also want to say how sorry I am to my sisters of season 12 and honestly the whole network and production company. All I can do is change the behavior and that starts with me and doing that work.”

On TV, the title card that aired mirrored the statement VH1 and Word of Wonder released early Friday afternoon:

“In light of recent developments and Sherry Pie’s statement, Sherry Pie has been disqualified from RuPaul’s Drag Race. Out of respect for the hard work of the other queens, VH1 will air the season as planned. Sherry will not appear in the grand finale scheduled to be filmed later this spring.”

There is nothing they can do about Sherry Pie’s participation in the season, since it has already been filmed, though VH1 could have opted to not broadcast it, which happened when ABC pulled The Great American Baking Show off the air after judge Johnny Iuzzini was accused of sexual harassment, and in 2009, when VH1 pulled Megan Wants a Millionaire off the air after one of its contestants murdered his wife and then died from suicide.

Despite what the disclaimer says, airing the season is probably more of an economic decision than anything else, since the show has been filmed.

I am curious if the network and producers will edit episodes to minimize Sherry Pie’s appearances and/or commentary. Of course, it’s hard to edit around some things, like if she were to end up in the bottom two and have to lip sync, or if she were to end up winning one or more challenges. Sherry Pie did get a lot of attention during the second episode, especially since she ended up being one of the top two queens.

Watching the episode and knowing about what Gugliemelli did and knowing Sherry Pie has been disqualified led to some awkward-in-retrospect moments. Referring to Sherry Pie, guest judge Thandie Newton said, as Kevin O’Keeffe pointed out on Twitter, “I can’t wait to see what comes next.” As Kevin added: “WELL”

A spoiler for Drag Race season 12

This section discusses how Sherry Pie did in the competition, so skip to the next section if you don’t want to know.

Since it was produced last summer, this season of Drag Race has mostly been spoiled, including the order season 12 queens are eliminated.

NBC News reported on the disqualification and revealed what happens this season. said that “a spokesperson for VH1 told NBC News that Sherry Pie, whose real name is Joey Gugliemelli, will be removed from the live finale of RuPaul’s Drag Race, where the queen was supposed to compete as one of the final four contestants.”

How will the show respond to that? Will it bring back the queen who places fifth, and give them the spot in the finale? Will it just proceed with the final three queens and let them lip sync for the crown together?

A different season 12 queen responds to a sexual assault allegation

Also on Thursday, another RuPaul’s Drag Race season 12 contestant, Jesse Havea, responded to a 2018 claim that Havea had sexually assaulted someone.

Havea performs as Brita Filter (and is one of two queens this season, along with Jan Sport, whose drag names are references to products and brand names, and thus have been changed for the competition), and Pink News reported that “Havea was accused of assaulting an anonymous man while he slept.”

“I need to re-address the false allegations raised against me in 2018. I reiterate that the claims made against me are untrue. As someone who cares very deeply about the importance of consent (from first-hand experience), I always actively attempt to bring that to the forefront of any sexual encounter I have. I plan to continue to do what I’ve always done with my drag: try to create safe spaces where people feel comfortable to express themselves.”