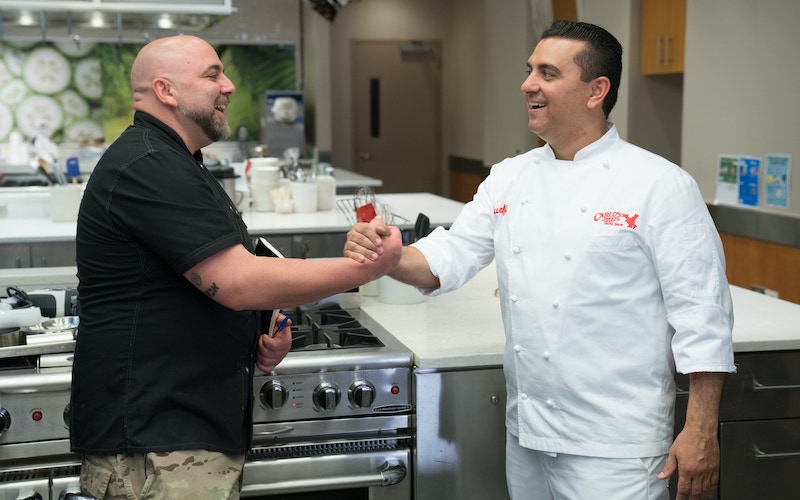 “Listen, I know it’s going to suck,” Buddy Valastro said at the beginning of Buddy vs. Duff 2, the second season of the Food Network competition on which he faces off against Duff Goldman.

I was thinking that, too: after all, Buddy vs. Duff season one was a thrown-together, haphazard, sketchy competition. But the season two premiere established it as an improved version, though with a bit of lingering weirdness.

While the show opened with Buddy explaining the first challenge to his team, and describing it as the first “east coast” challenge (Why are there coast-based challenges? It’s unclear.), most of the rough edges on the show have been smoothed out: There’s no host, but there is an announcer/narrator, who started by telling us “the rules are different,” though those actual rules are never really spelled out.

There are now three judges, an improvement over season one, which spontaneously added a judge, and had guest judges who didn’t actually judge. The new judges are:

The judges are again scoring with points—30 total, but with no explanation about how that breaks down. Compared to the detailed breakdown we get on Food Network’s Tournament of Champions, this still feels a little sketchy, especially because, in season one, there was a point system led to a suspicious, perfect tie right before the finale. Who could have ever seen that coming?

In the line I quoted above, “Listen, I know it’s going to suck,” Buddy was referring to the 24-hour time limit his team had to finish a New York City-themed cake, which was the one challenge both he and Duff had to complete. The show has—for now, let’s hope forever—dumped its opening mini-challenge, which required the bakers to do something outside their wheelhouse.

Instead, they just have to create one big cake for an event, an event that I am not convinced would have existed outside of this show. (Episode one’s cakes were for an event allegedly thrown by actor Debi Mazar and news anchor Rosanna Scotto.)

The previews show us that there will be Star Wars-themed cakes, including a cake that looks like Han Solo’s  Millennium Falcon, dinosaur cakes, and even a horse cake with a fame thrower that may be presented at something that looks like Medieval Times. There’s a lot of artistry and spectacle coming.

The biggest change, though, is to how Duff and Buddy do their work, and to their demeanors and sportsmanship.

Buddy vs. Duff’s drama has cooled

One considerable structural change to the competition is that what was two teams of two now involves 10 people. While the bakers have their right-hand men back—Buddy has Ralph and Duff has Geof—they also have four other team members.

That allows them to do more and divide the labor, and in the first episode, at least, Buddy and Duff almost took a back seat, because the episode spent its time showing the team members working.

The drama of Buddy vs. Duff season one mostly came from Buddy acting like an assclown, coming across as a bad sport, complaining when he lost and acting petulant. He even walked off the set and argued with a producer during the very first episode.

That version of Buddy was not in this first episode; instead, we saw him repeatedly empathizing with his team, encouraging Ralph to not be so self-critical as Ralph attempted to sculpt the perfect Statue of Liberty.

It was almost like their personalities were reversed from last season: We saw Duff throw a sheet of plywood, creating a noise that made his team literally jump. But that was it; it’s not like Duff turned into some kind of ego monster, it’s just that the editing showed us a moment of his stress.

Buddy, Duff, and their show have become a lot more playful: each kitchen/workroom has a large TV and a webcam above it, so the teams can watch each other, show off their work, and offer gentle mocking. It’s a fun component, and there was no sense of animosity in that interaction.

Last year, Duff said in an interview that he and Buddy bonded during the first season’s filming—perhaps because they were both trapped inside a production that was as sturdy as a fondant chair, as organized as a tipped-over refrigerator. That wasn’t noticeable last year, but I think you can see it now.

Buddy vs. Duff 2 happened because Buddy vs. Duff 1 was Food Network’s most-popular show in 2019. It’s no surprise that a profit-driven network would bring back its top-rated show; I’m only surprised that it took this long, and that there isn’t already a Buddy vs. Duff season 3, and a spin-off Buddy Visits Duff, where Buddy comes over for a sleep-over, and Duff Drives Buddy Through Drive Throughs Where Buddies Work.

However, the show’s return makes my eyebrow raise at the competition and its legitimacy. Did Food Network bring the show back just to even the score and give Buddy a win? My conspiracy theory receptors activated when Buddy said, of losing to Duff, “One time, maybe. Two times, no way. It ain’t happening twice.”

If Duff wins, well, it probably is a legit competition. But if Buddy ends up winning season two, it’ll be hard to see that as earned and not sketchy, unless Duff has really screwed up over and over again. (Update and spoiler: Here’s who won season two, and what I think about that outcome.)

They’re equally matched in that they’re both wildly different bakers and cake decorators.

Buddy’s cakes are big, sprawling, and often messy around the edges. Duff’s cakes are smaller, hyper-focused on detail, and don’t make as much of an immediate emotional impact.

That mostly held for the first challenge, though Duff’s cake (a reproduction of St. Patrick’s Cathedral) had some impressive visual oomph, and Buddy’s cake (a skyline with Times Square-like billboards below and a giant Statue of Liberty) had some striking detail, especially with the precision sculpting of Liberty’s face.

So perhaps Buddy and Duff really are challenging each other to expand and grow. Could it be that this made-for-TV rivalry that brought together the stars of what once were two rival shows? Or is this season just made for TV?