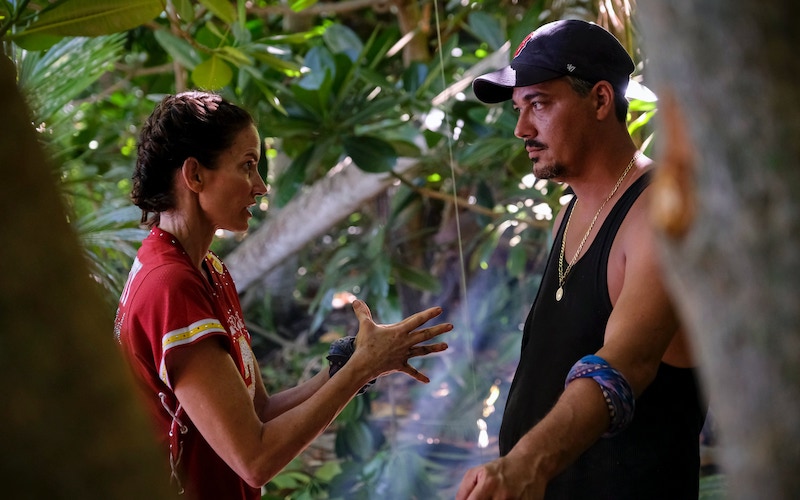 Danni Boatwright floats the idea of getting rid of Parvati Shallow to Boston Rob Mariano during Survivor: Winners at War. Guess how well that worked out? (Photo by Timothy Kuratek/CBS Entertainment)

Everyone on a Survivor: Winners at War tribe is scared of one guy, Boston Rob. So guess what a group of winners did when they went to Tribal Council and Rob had no immunity? If you answered vote out a woman instead!, you win a Survivor advantage. Sorry if you wanted something special, but everyone is getting advantages tonight.

The episode was frustrating, but it was not without its wildly entertaining moments, including Tony’s new attempt to stay under the radar. My frustration with the Sele tribe is that they’re playing like this is a newbie season, with a handful of returnees who the newbies are so scared of they just defer to at every opportunity. (That’s how Rob eventually won Survivor, once he was placed on a tribe with people who just idolized him instead of challenging him.)

They’re bowing to Rob like he’s a massive unrecognizable wooden face statute instead of just voting his entitled Godfather ass out of the game.

And oof, his entitled-ness. I’m completely sympathetic to his frustration of seeing Amber voted out—of course, anyone would be sad to see their significant other voted out of a game, and reducing their chances as a couple of winning $2 million. But I have no time for his sanctimoniousness, when he talked about them leaving four kids behind. Your kids aren’t some kind of shield that prevent you and your spouse from being played in this game, dude.

Alas, everyone else seems to be playing his game. There was a moment when Ethan Zohn told Rob, “Dude, you sucked today,” and it was kind of amazing, because who dares to do that?

But Ethan is a firm ally of Rob’s who was just kidding around. They’re allied with the other old-schoolers Parvati and Danni, though they’ve all formed an alliance that technically has no leverage because it’s so small.

“It’s time to target the big dogs in this game,” Adam said—in the preview for next week’s episode. But why wasn’t it time this week? Conversation swung to point in the direction of Parvati—not Rob, because apparently the winners are only going to consider voting out women first and make sure they repeat the patterns of the last few years of Survivor—but the tribe chickened out and went for the easiest vote of all: Danni.

I suppose that gets rid of an old-schooler, but we’ve already established that alliance does not have the numbers, and Danni seems like the least of the threats. But she dared suggest a move against Rob and Parvati, and did so with allies who were unwilling to stand up to those two.

Adam explained earlier: “Parvati is a massive threat in this game, but she is super-tight with Boston Rob, and Boston Rob is the godfather, and going against the godfather is really dangerous.”

THAT IS WHY YOU VOTE HIM OUT RIGHT NOW. Why are Survivor winners this scared?!

And how, exactly, is Rob dangerous? What’s there to be scared of if Rob’s dumped onto the Edge of Extinction and left to help decipher word puzzles? If he wins his way back in—vote him out again!

Of course, I’m sure that’s when Jeff Probst will introduce The Sia Shield of Permanent Immunity and Cash and deliver it to Rob in his bag along with a latte and a thank-you card for making the last two seasons of Survivor so fantastic. But they might as well try.

Ben—Ben!!—did try, and seemed to be the only person willing to challenge their authority. “Being able to get them out is my main objective,” he said. Good luck on your quest!

I will give Rob and Parvati credit for just totally having everyone else playing their game. And Rob’s move at Tribal Council to get everyone to dump their bags would have been impressive had I not been blown away by Denise’s stunning slight of hand: she emptied her bag but concealed the fact that she has an idol.

So to recap: A group of winners totally had the votes to get rid of two of their biggest threats, and they didn’t. That’s not the kind of war that Survivor: Winners at War promised.

The episode opened with a shower of idols: Denise found one, helped by Ben, who was searching with her and teaching her how to win new Survivor, which usually just involves being a man to whom Jeff Probst gives advantages.

On the other tribe, Kim found an idol, too, and both idols were split in half.

That meant their finder had to give the other half to another person that day. Denise gave hers to Adam, but not before proposing giving it to Parvati (WTF?!), while Kim gave her other half to Sophie, who basically mocked Kim for doing that: “I’m the last person Kim should be telling about her idol.”

Sophie said that Kim, who’s basically found herself at the bottom, is “the most socially adept person out here,” which explains why everyone is basically ignoring her: “everybody’s going to see that as a threat.”

That is one of the fascinating things happening this season: seeing who is perceived as a threat (including by me!) and who is not, even though every single person has won Survivor and that means they all know how to play the game.

Meanwhile, on the Edge of Extinction, its two inhabitants, Amber and Natalie, were given a new clue in the form of some word salad, but neither of them figured out that the answer was in the first letter of each line: WATER WELL.

However, Natalie did discover the advantage in the actual water (ew), which she sold to Jeremy. It was a brand-new advantage: the ability to leave Tribal Council and be safe from the vote, but also not vote.

I’m unimpressed by yet another advantage that just allows someone to not play Survivor. Being at each vote—and being vulnerable, unless you hold immunity—is part of the game. This is better than the idol nullifier or super-idol, but it’s still just another unnecessary advantage.

I still believe Survivor doesn’t need those kinds of things to make the episodes and game interesting, and we had plenty of evidence of that tonight.

The challenge was an absurd blow-out, so much so that Jeff Probst mocked Rob and Denise for organizing their pieces first, before starting to place any. “Rob and Denise are absolutely nowhere!” he yelled. “For all the time they spent organizing, absolutely nothing to show for it!” (That sounds like so many of my days.)

And outside of the immediate game, there was some wonderful entertainment in the form of Tony’s ladder.

Yul designed a perfect loop and stick thing to pull breadfruit off a tree. Then Tony designed a massive, structurally unsound ladder that immediately snapped off its first rung when he started to climb it to retrieve breadfruit.

I love how hard Tony is trying to stay under the radar, to not just do what comes naturally to him, which is to run around like a lunatic.

“I know we signed waivers before we came out here, but I don’t know if there was a ladder clause in the contract,” Tyson said as his tribemates hoisted it up for Tony to climb. “How is this guy still alive?”

Good question. As Tony stepped on the first step, it collapsed. “I designed it!” he declared. The ladder was a lot more stable than Tony’s other major project this episode, resurrecting the “Cops R Us” alliance with Sarah, who is still acutely aware of what happened last time she was in an alliance with Tony, which is that he voted her out and then went on to win the game.

In that dynamic and in all the others, there’s something completely different about the way the red tribe, Dakal, is playing.

They’re all running at and away from each other simultaneously, eyeing each other while watching themselves. That’s so much more interesting than Sele, whose tribal strategy seems to be to put one foot in the circle and then run way and hide.