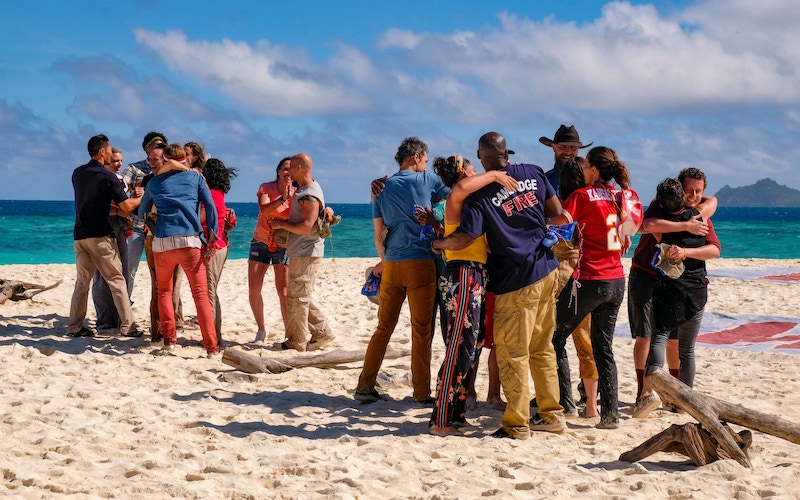 Survivor winners are split into tribes during the opening moments of Survivor: Winners at War's first episode, "Greatest of the Greats" (Photo by Timothy Kuratek/CBS Entertainment)

Watching the Survivor: Winners at War premiere, I was delirious. Quite literally—I learned this morning that I have the flu—but also just because of what an effective job it did at establishing both Survivor’s now 20-year, 40-season history and at setting up this epic battle.

“It’s good to be back,” Ethan Zohn said while casting his first vote on Survivor: Winners at War. Yes it is: and it’s also good to have most of these winners back on screen again. It’s hard to characterize just how elevated everything felt immediately, with so many epic players all on the beach at once.

This is the oldest Survivor cast ever, and their lives have changed significantly since they were last on, and especially since their first seasons for those who’ve played multiple times. There was a lot of day-one emotion, from Tyson talking about how winning Survivor allowed him to stay home with his kids, to Ethan sharing that “life after cancer: that’s when it really got tough.” Amber got emotional as a result of the first challenge (“It was hard to root against my husband. I’m his biggest fan”).

Even Ben, who’s probably my least-favorite winner of the group if I were to rank them, grew on me rapidly. Most of that was his self-awareness. I suspect Ben may share some of our feelings about his win, as he said in an interview, “I don’t know how I found myself with all these winners” and then allied himself with Adam because Adam “knows the game.”

There was also the way Ben immediately succumbed to Boston Rob’s shakedown for information, but again, he acknowledge what’d happened and was sort of in awe about Rob’s ability to do that.

It’s interesting to contrast the kinds of social interaction that we saw. Both Rob and Sandra were quite aggressive, and came hard and fast at their fellow players. In the first episode, Rob demanded to know if Danni floated his name. In the second episode, Kim was stunned that no one would talk to her about the impending vote, and told Sandra, “I feel like it’s me,” and Sandra just laughed! Right in Kim’s face!

Meanwhile, Denise and Adam took a walk and had a charming interaction where Adam basically pleaded to be Denise’s new Malcolm, or as she put it, “my jungle boy number two!” But their extended walk raised suspicions, and they immediately became targets—targets that were way too easy, I’d argue.

It seemed like the tribe was looking for an easy first vote; heck, Rob and Parvati are on the tribe! Plus, they quickly aligned with each other. Everyone else could have easily banded together and sent one of them home. Instead, Adam managed to divert suspicion toward Jeremy and Natalie.

Ultimately, that meant Natalie was the first person voted out. While it’ll be tough to lose most of these players, my greatest disappointment was watching an ugly pattern get another data point.

Adam pointing fingers at Jeremy and Natalie, and later at the show’s only married couple (Rob and Amber), was part of a larger, fascinating focus that dominated both episodes.

In the first hour, Survivor did something I can’t ever recall seeing before: it included a clip from another TV show, a poker tournament, and it did so to acknowledge relationships outside of the game.

The show usually likes to pretend that absolutely nothing has happened before that first day. It’s a little absurd on newbie seasons when Jeff Probst asks the contestants their names, as if he doesn’t know, but that’s how reluctant the production is to let the outside in. There’s no mention of pre-Ponderosa nor casting finals, and the connections and judgments that start forming then.

Survivor: Winners at War is going the opposite direction, perhaps because it’s impossible to ignore those pre-existing relationships when so many of these winners have played together before, and when there’s even a married couple competing. But it’s fascinating and awesome to see.

Yul and Sophie broke down their tribe, and part of that was the poker alliance: Rob, Tyson, Kim, and Jeremy, who played in a tournament last year, and we saw clips of that, including when Tyson said that if they ever played together, they’d be a “power alliance.”

What was most incredible about Yul’s analysis was how he recognized that he was basically screwed because he didn’t have these same pre-existing relationships, but then realized that, along with Sophie, Wendell, and Nick, they become a powerful swing voting bloc that the poker alliance or the “gritty” alliance of Sandra, Tony, and Sarah would need. Yul used his lack of prior connections as a strength, and that’s just one of the many reasons why I love him as a player.

The two back-to-back episodes began with a champagne toast, which was a hilariously bizarre scene, from Probst’s toast, delivered in an accent, and the way the winners tossed their champagne classes over their shoulders. (I pity the Dream Team members who had to pick around in the sand for chards of glass.)

Then, after dividing into tribes, we went right into a reward/immunity challenge, a wrestling match in the turbulent ocean. (Apparently the challenge was first to five wins, but two of the battles were not epic enough to include. I learned that from Gordon Holmes, who shares a bunch of other behind-the-scenes tidbits in his recap.)

Both challenges were excellent, requiring tribemates to actually work together, especially in the second—an obstacle course in the water, where Rob ended up launching several tribe members up and over a spinning log.

Sele’s come-from-behind win was thrilling, and it also meant that the two tribes are even, for now. (I was slightly worried midway through that challenge that Sele would never get it together and then be Pagonged.)

Dakal, the red tribe, seemed to take the opposite approach for their first vote, going after what they perceived were the strongest bonds: the poker alliance, Amber and Rob. Tyson bailed on his poker buddies once he realized which way the winds were blowing.

Amber was voted out first, and gave her fire token to Rob.

Both she and Natalie are out but not gone, of course. Natalie became the first inhabitant of the Edge of Extinction, which isn’t even offered as a choice this season, probably because there’s no possibility any of them would choose not to go. (Whether everyone stays there all season remains to be seen.)

On Edge, which is still filmed with lots of extreme close-ups, Natalie learned that she can buy things with fire tokens—but she has none, as players have to bequeath their fire tokens to another player after they’re voted out.

Instead, she was basically given an immunity idol that had no value to her, but that she could offer to any player via the Survivor Postal Service, which delivers things into players’ snazzy new bags. She offered it to Sandra, who bought the idol for one fire token.

I can’t wait to see what Sandra does with that idol, and with what the rest of these winners do over the next few months.