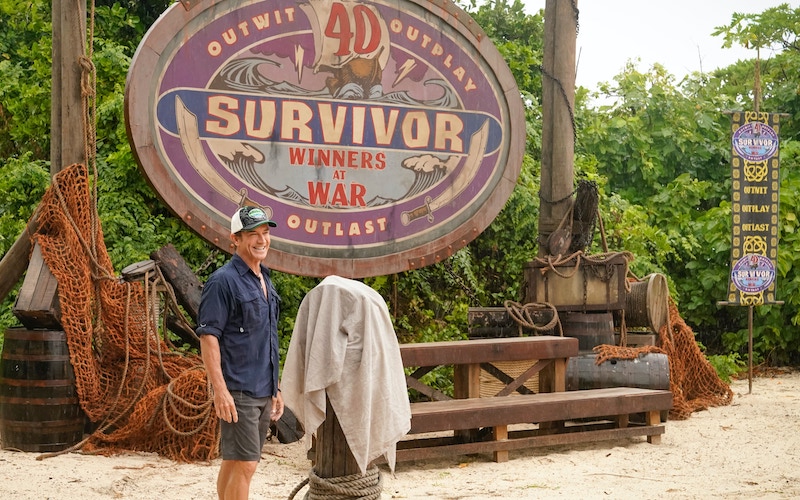 Jeff Probst during the premiere of Survivor: Winners at War, which was previewed during the Survivor at 40: Greatest Moments and Players retrospective (Photo by Robert Voets/CBS Entertainment)

Survivor has never done clip shows well—the Thanksgiving recap episodes were usually skippable, despite a promise of new content—and Survivor at 40: Greatest Moments and Players was no exception.

I went into it ready to be fan-serviced some nostalgia, and when it opened with Survivor: Borneo’s opening moments and current-day Jeff Probst telling us, “tonight we celebrate 20 seasons and 40 years,” I was salivating. But the special instead offered a reminder of the sharp decline the show has taken in recent years, since it mostly focused on its worst elements.

What it did do was get me even more ready for next week’s season 40 premiere. During actual commercial breaks, there were ads of various lengths focusing on individual Survivor: Winners at War cast members—set to the soundtrack of Sia’s “Alive”—which were actually far better recaps of the past than this retrospective.

The special gave some time to an extended preview of Survivor 40 and all of its explosions, which was promising, though it took me a minute to realize that it’s just next week’s cold open, so the same few minutes we’ll watch one week from tonight (and that CBS usually provides to EW).

The very end did make me laugh: “I spent 36 days with Boston Rob on Island of the Idols and Boston Rob never told me that he was playing again,” Sandra said.

I guess the lies start early for these winners!

Instead of being organized chronologically, going through each of the 40 seasons—which would have left each season about one minute at the most, and thus was impossible—the editing used Survivor structural elements as themes to show us clips, some of which were quick and others of which were extended sequences.

It gave brief attention to season one in Borneo, including the first alliance, Sue Hawk’s rat/snake speech, and Richard Hatch’s win, but almost entirely ignored Rudy Boesch, who just died—and who played a major role in the season.

If there’s any season that should have some extended scenes in 20-year retrospective, it was season one, but the special moved on—to Pearl Islands, leapfrogging over five seasons. This was a special that was heavily focused on the recent past.

For every moment such as Eliza Orlins saying, “That’s not an idol! That’s a fucking stick!”, there was far more attention given to twists and changes that have turned a perfect Survivor pizza into quite a mess.

What ended up getting attention were things such as:

While it’d be impossible to cover even a fraction of the 590 contestants who’ve been on Survivor during 39 seasons, a particular type of player got a lot of attention (hint: men), and there was some strange revisionist history.

During the part about alliances, the special suggested that Denise betrayed her alliance with Malcolm, which is not what happened.

We saw the Tribal Council when Parvati handed out idols to Sandra and Jerri. Parvati’s game play deserves attention and credit, but then Probst’s narration did something really weird: he said Parvati was “opening the door for Sandra to become the first and only two-time winner.”

That’s all the credit you’re going to give Sandra for winning twice? A person who’d already won and should have been the biggest target and she won because of Parvati’s idols? At best, that’s just bad summary.

Survivor at 40: Greatest Moments and Players wasn’t just summary or recap. It was more like Jeff Probst’s scrapbook, showing what he and his producing team care most about now.