Love is Blind: Which couples survived the finale? And other behind-the-scenes questions and answers

Love is Blind, Netflix’s dating experiment series, is now streaming its 10th and final episode, on which the five remaining couples decided whether or not to get married, after getting engaged before ever seeing each other. Are those couples still together today?

I have the answer from the show’s creator and executive producer, Kinetic Content’s Chris Coelen, who also talked with me about other behind-the-scenes details, including the show’s genesis, why everyone on it is so attractive, and why engagements and marriages are part of the formula.(This story reveals what happens on the finale of Love is Blind.)

Where did the idea for Love is Blind come from?

Chris Coelen is the founder of Kinetic Content, which also produces shows such as Lifetime’s Married at First Sight (which is currently airing its 10th season, its highest-rated yet) and the new competition series Spy Games for Bravo.

“I have actual children and I have TV children. This is definitely my baby in many ways,” Coelen told me, referring to Love is Blind. “I’m just really, really proud of and have been living with for a couple years. I just couldn’t wait for people to see it and discover it, and share in the experience I had, which was really extraordinary.”

The idea was developed several years ago, and then pitched to Netflix.

“Looking at the streaming platforms, and looking at the direction that so much of content is going, Netflix didn’t have a big relationship series, in terms of an arced relationship series,” he said. “So I tried to think of a show that I felt could fit —just something that would make sense for Netflix. I just spent a ton of time thinking about it, and talking to people, and talking to my wife, and ultimately came upon the idea of the show.”

Coelen said the central idea powering Love is Blind is that the “most universal truth about love is that you want to be loved for the person you are on the inside,” and the show is “an attempt to try to enable people to connect without any distractions, without any devices.”

Where is the facility, and when did the show film?

The pods and houses where the cast members gathered together to talk were all constructed on a soundstage at Pinewood Studios in Atlanta.

Avengers: Endgame was filming on another soundstage while they were in production there. Considering that movie came out last summer, how is that possible? It’s because Love is Blind was filmed in the fall of 2018, starting in October, when Avengers was doing reshoots in Atlanta.

That means the cast of the Netflix series has been waiting almost a year and a half to see the show and be able to talk publicly about their experiences.

All of the contestants were from the Atlanta area in order to set potential couples up for success, since they’d all live in the same metropolitan area. “We wanted to give the people who participated a real shot,” Coelen said.

How did dating work? And how did couples actually talk in the pods?

The initial meetings for the cast members were facilitated by producers, in order for every person to get a chance to meet every opposite-sex cast member.

Those initial dates lasted between seven and 10 minutes, Coelen told me.

After that, he said, the cast was in control, requesting to spend time with each other. Both had to want to see the other person: if person A wanted to meet with person B, and person B did not want to meet with A, then they did not meet.

Coelen said that the production “wanted them to be able to date”—of course, “without leaving the facility, and without seeing or touching each other.” So if a couple wanted to have pizza together, or paint on a canvas, the producers would “try to facilitate that for them.”

The pods were completely soundproof, so how did the couples actually talk to each other? I assumed that the wall between the pods had space around it, allowing sound to travel. But no: that colorful wall was also soundproof.

As a result, the couples talked to each other electronically: They were wearing mics, and heard each other through a speaker.

Why are the cast members all so hot? Why is there so little diversity?

Love is Blind is about connecting without physical attraction—or without judgment of someone’s appearance. People get to know each other based on their personalities, and can’t just reject someone immediately because of their first impression.

That’s an interesting premise, but as I noted in my review of Love Is Blind, everyone is conventionally attractive. Having seen their fellow same-sex participants, the cast members could probably be pretty confident that the opposite-sex person they’re talking to—or falling in love with—is also attractive.

Plus, if this is an experiment about connecting via personality, why is there so little diversity in other ways, such as sexuality (just one bisexual man) and ethnicity? There’s basically no diversity in body shape, or gender expression, or age, or other characteristics.

“Certainly, there are a lot of attractive people on the cast,” Coelen told me. “It’s funny: I saw a couple comments, [and] people were like, They should have had Quasimodo. Why? Why would we do that? That’s not what the show’s about. If someone fell in love with Quasimodo, great, we’d follow that story. We were following the real stories that developed.”

“It really did not matter to us what those people looked like,” he said. “It’s a not a show about sexuality or about looks or about race. It’s about what’s on the inside. There are certain real-world factors: some people are attracted to people certain looks, or certain gender, or many different things.”

What happened with people who didn’t connect with others?

If an individual wasn’t clicking with any members of the opposite sex, the production actually let them go while filming was in progress.

One reason for that was to free up pod time for those couples who were connecting with others, because the participants wanted to spend a lot of time together in the pods.

“There were many people on the show that you don’t see—we had a bigger pool, 40-some odd people that were originally there,” Coelen said. “We ended up culling it down because there were just some people who were not vibing—emotionally vibing, connecting with other people. And we really wanted to focus on people who were developing real emotional connections.”

Why have the couples get engaged and married, instead of just date?

One thing I brought up in my review was how ridiculous it seemed that people were getting engaged so quickly—I don’t doubt the strength of their feelings, but it also just seems like an absurd leap to make.

Why not just, you know, date? Why leap into engagements and marriage?

I asked Coelen about that, and why the show didn’t just, say, connect people in the pods and then send them on a trip together to date and get to know each other, rather than requiring engagements and leading up to a marriage climax.

He said the cast “got to know each other at that level” that was “so deep that they described it as a more intense connection than they’d ever had with another human being in their life. So much so that they really, truly want to spend the rest of their life with them. If you feel that way, and you know that—it’s like my wife would say, Why don’t we just get married? What difference would it make?“

“If you have that love, and you ultimately say and commit that you want to spend the rest of your life with them, you should be able to figure out pretty quickly whether you want to go through with it,” Coelen said. “And if you don’t go through with that, it’s probably indicative of a problem.”

“When you get to that place at the altar, it forces the decision,” he added. “A lot of people hang on to relationships too long, knowing that it’s not really going to go anywhere. If you know it’s going to go somewhere, then why wouldn’t you? Especially if you know and love somebody deeper than you’ve ever loved in your whole life.”

Why were there two secretly engaged couples?

Two couples—Rory and Danielle, and Wesley and Lexie—actually got engaged in the pods, but were essentially ignored in the show. Rory got the most screen time, though not for his relationship with Danielle.

Coelen said that was just because the experiment ended up being more successful than producers expected.

“The people you end up seeing on the show—we had eight couples get engaged ultimately, and we ended up stretching to follow six,” he said. “There was no way with a 10-episode order we could ever have done justice to eight couples, trying to tell their stories. So we picked six.”

“The fact that we had the crazy success that we did—I don’t think anybody was completely expecting how intense an experience would be,” Coelen added. “It was more successful than I’d even dreamed.”

Are the married couples still together?

Yes. Of the six couples we saw, one broke up in an earlier episode (Carlton and Diamond, with their dramatic poolside fight), while three broke up at the altar.

But there are two couples who did get married: Barnett and Amber, and Cameron and Lauren.

“The people that went through and got married are still together to this day, a year and a half later,” Coelen told me.

The other couples broke up:

Carlton and Diamond ended their relationship while in Mexico, after Carlton revealed that he’d dated men and women, and Diamond was upset that he hadn’t been fully open with her. (Carlton and Diamond both talked to People about that fight.) Coelen said “I wasn’t surprised that she got upset” because “she was closer to Carlton than she’d been” with anyone else, and thought that Carlton had been fully honest.

Damian and Giannina broke up after Giannina said yes at the altar, but Damian said no. His reason: “I’ve stayed consistent all the way through this, and you have not.” Coelen said, “I was surprised. I didn’t think that was going to happen”

Kelly and Kenny broke up because, as Kelly said, “My feelings for him were not as intense as his apparently are for me.”

Jessica and Mark broke up because Jessica said no at the altar. “I don’t think either one of us is ready to take this on,” she said.

Will other people be ready to take this on if there’s a Love is Blind season two, which I’d expect there will be? And how will knowing about the show affect those relationships? For now, those questions remain unanswered. 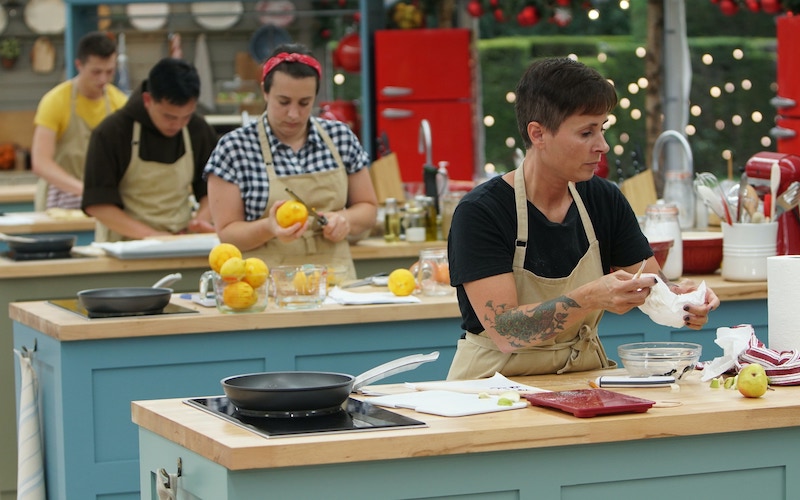 Previous
ABC's Great American Baking Show is now casting. Who producers want, and how it's filmed. 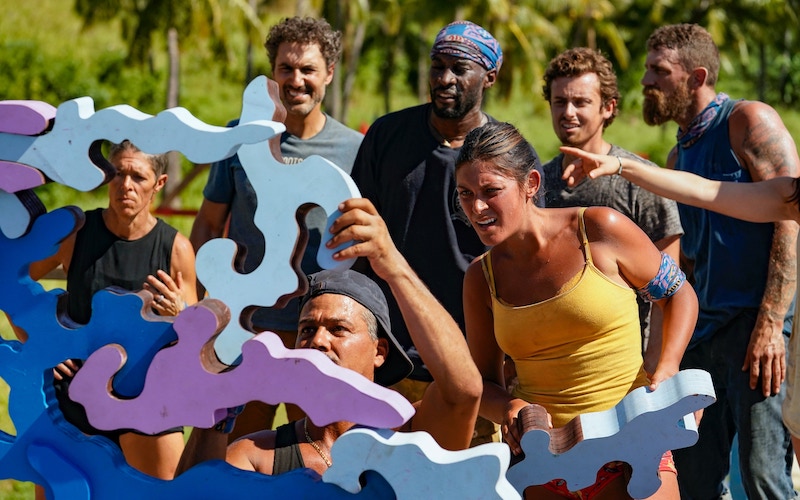 Next
Did Survivor's winners finally target one of the 'power trio'?
Click here to cancel reply.