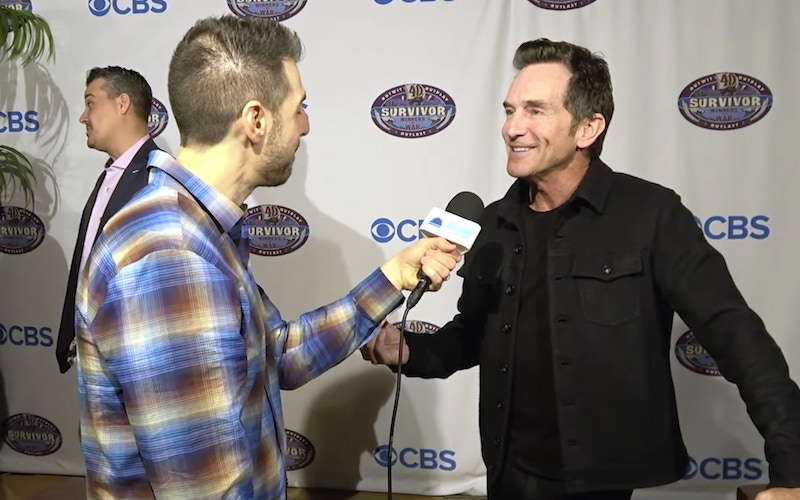 Survivor showrunner and host Jeff Probst has given many in the Survivor community a gift on the eve of the premiere of the show’s 40th season: the much-reviled Edge of Extinction twist will not return after season 40, at least for “a while,” as the campaign against Edge worked.

It is, however, a key part of Survivor: Winners at War, which premieres tomorrow and added a new twist, Survivor fire tokens, to the Edge of Extinction. Despite its presence, Probst promised that “this will be the best season we’ve ever done—even better than Heroes vs. Villains, Fans vs. Favorites. It’s off-the-charts good because of the players.”

This welcome, awesome news about Edge of Extinction came from the red carpet at CBS’s premiere of season 40 at the Arclight Hollywood. RHAP’s Rob Cesternino interviewed several players, ending with Jeff Probst.

Probst told Cesternino that the Edge of Extinction is “driven by a lot of what I’m interested in,” reiterating the argument he made here.

Rob asked, “What if it stopped a little bit further away from the end?”

Probst offered an explanation that I’d not yet heard, but that makes perfect sense: “The philosophy has always been that whatever massive twist, thematic twist, it needs to pay off in the final episode,” he said. “So that’s how we structure it. If you looked at it as a movie, it’s the last act. Does he get the girl? It has to pay off.”

“I hate losing good people. That’s the reason the jury got bigger,” he also said. “These are not scientific answers; they’re just ideas.”

Probst suggested he was open to modifying the Edge of Extinction. “Maybe we’re deep enough in the show that it doesn’t have to pay off with symmetry at the end. Maybe it can pay off in episode 10 and it’s just a fun twist,” he said.

But then—surprisingly—he revealed that it wouldn’t come back any time soon. Here’s what Probst said:

“Let’s just take 30 seconds, okay? And I’m just going to tell you my truth about Survivor … and anyone can mock this all they want.

Here’s my truth: I love this show. I love finding people that want to play. I love spending most of my year trying to figure out what’s something we can do that would twist the game so that when they get there they go, Oh shit, now what am I gonna do? And I love watching it happen.”

“I think it’s fantastic watching all these twists. And when people get so invested that they don’t like it, that tells me: Okay, we’re in this together. You don’t like it. I get it. I liked it.

But I hear you. We’re not going to do Edge for a while. I’ve heard people. I got it.

I’m not saying we won’t do it again—we might get a wild hair and we want to do it again. “

Jeff Probst’s point of view about Edge and criticism of the show is so very, very different from what Jeff Probst said about criticism Survivor while on location last summer.

Probst did begin his Monday night interview with Rob Cesternino by asking Rob, “Do you like me at all?”

Probst elaborates: “I think there’s this weird power imbalance sometimes when players are on the show, in that, they don’t have as much power, because they don’t know what the twist is, they want to say, Oh, and by the way, Probst, he’s not all that.“

Probst does give Rob compliments about RHAP. “I’m super-impressed with what you’ve created,” he said.

Later, Rob asked Probst about this, and the way “a lot of people send hate your way about things that they don’t like. I’m sure that’s very frustrating for you.” (I’m sure people are often toxic—social media is full of that. But I also am not fond of criticism of decisions being conflated or confused with actual hate.)

“I do understand: of course you would throw it to me,” Probst said. “I’m the voice of the show, I’m the producer of the show, and sometimes it hurts my feelings, because it’s personal, and I never feel personal toward anybody—I love the people who play.”

“I like the back and forth. But I just wish that people understood I’m truly coming from love. This whole show changed my life. I would be nowhere without all you guys. And I just wish it was a little more harmonious rather than some of the stuff that people say on social media is just so hateful,” he added.

“I’m maturing along the way. So things that I might have said back in 2004, I might not feel today. And I probably didn’t understand the show as well, and I didn’t understand television and why an all-star season did make sense,” Probst said.

But he left me “I’m super-pumped about this season. They delivered,” Probst said. “This will be the best season we’ve ever done—even better than Heroes vs. Villains, Fans vs. Favorites. It’s off-the-charts good because of the players.”

I can’t wait—less than two days to go!