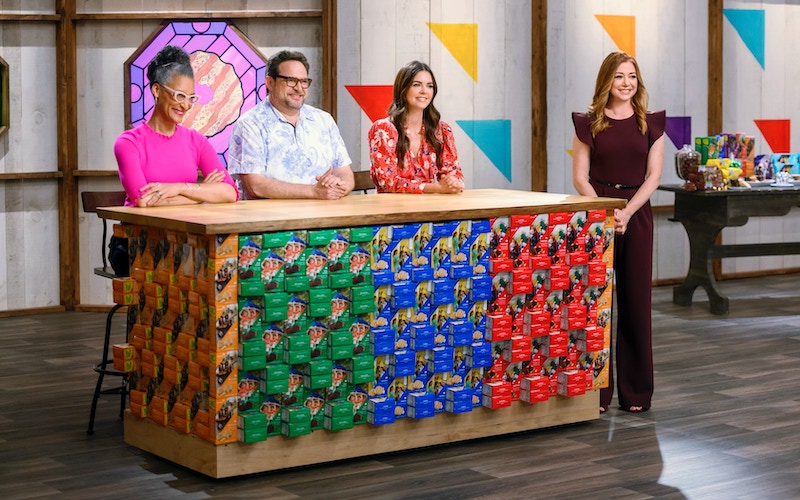 In the first two episodes of Food network’s Girl Scout Cookie Championship, which is like Chopped except the required ingredient is Girl Scout Cookies, we never see the contestants, host, and judges standing in the same room. Nearly all of Allyson Hannigan’s instructions sound like they were delivered in voice-over, including time calls.

There are virtually no wide or long shots, just rapid cuts between medium shots, medium close-ups, and close-ups (here’s a visual illustration of those types of shots). The effect is clumsy and disorienting, kind of like trying to read a box of cookies while pressing it against your nose. Why is this show such a mess?

In the first episode, the judge’s table doesn’t appear until the very end, and there’s one quick shot of it. It’s bizarre.

I’m not suggesting the judges, host, and contestants were filmed at completely separate times (the judges do visit contestants at their stations, after all), nor am I suggesting this is like the second Mamma Mia where Cher’s parts were all filmed later in front of an obvious green screen.

But if you were to film a reality show’s parts at separate times, this is what it would look like.

While the judges give their critiques during the second challenge, it looks like they’re looking in the wrong direction based on where the contestants are standing, though we never actually see them all in the same shot.

Was someone allergic to wide shots? Did they have to reshoot half the show because footage was accidentally deleted?

Virtually everything host Alyson Hannigan says seems like it’s ADR—additional dialogue recording. It’s common in reality TV to add a line or two here or there to fill in gaps or make sure the audience remembers something, but there’s so much here, and it’s super-clunky and noticeable.

Alyson’s summaries of the judges’ critiques and results of the rounds are all voice-over. So are the details about the challenges. When you never see a person while they’re talking, that’s a clear sign that what you’re seeing was created in editing, not captured organically on location.

Alyson Hannigan hosts The CW’s Penn & Teller: Fool Us, so she’s clearly capable of hosting a show, which makes this even stranger.

Also strange: Food Network’s press releases about the show have not mentioned a production company nor any producers. (Update: the show is produced by Cineflix, which also produces Property Brothers for HGTV.)

Most viewers may not notice this, or care, but watch this show back-to-back with one of Food Network’s other baking competitions (Holiday, Spring, Halloween, Christmas Cookie—you choose!) and you’ll see how absolutely bizarre it is.

The Girl Scout Cookie Championship lots of information about the Girl Scouts, their history and their cookies, and some cutaways to illustrations of the bakers’ intended outcomes.

The contestants—there are five new contestants each week, kind of like the Christmas Cookie Challenge—do some interesting things with the cookies, and perhaps that’s enough to make for an hour of light entertainment.

What I cannot understand is why this show is so bad. It’s just following a formula that Food Network has perfected, churning out hundreds of episodes a year, nearly as fast as Girl Scout cookie bakers produce cookies. What happened to this one?

There are only four episodes—Girl Scout Cookies are also only available for a limited time, after all—but perhaps that’s for the best.