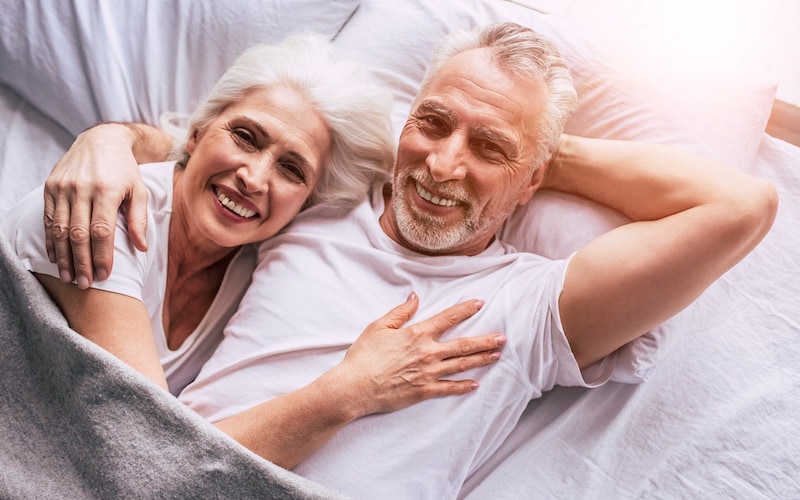 A stock photo of a senior couple in bed; not an actual couple on The Bachelor: Senior Citizen edition. (Photo by Brandon Roberts/Pixabay)

The Bachelor franchise is expanding with a new show for people who are 65 and older, and is casting for single seniors who are looking for love.

Will the show use the same format? Will the seniors live in The Bachelor mansion? Will Chris Harrison become their best friend? Will they be primarily white and straight just like on The Bachelor and Bachelorette? And will the show become a parade of cliched old people jokes, or actually embrace the fact that older people are sexual beings, like a reality TV version of The Golden Girls?

The application itself doesn’t specify an age, but ABC reality executive Rob Mills tweeted that the people they’re looking for are “65 plus!”

The casting application says people “must not currently be involved in a committed intimate relationship, which includes: any marital relationship (whether or not the parties are separated or currently in the process of divorcing or annulling such marriage); any co-habitation relationship involving physical intimacy; or a monogamous dating relationship more than two (2) months in duration.”

It also has a question about grandkids and asks the really great question, “Why would you want to find love on TV?”

While NBC’s First Dates did include couples of different ages, as have non-broadcast shows, like Netflix’s Dating Around, it’s still very welcome for a broadcast network dating reality show is giving attention to people who aren’t in their 20s and 30s.

And The Bachelor is the dating show, in terms of ratings and media attention, so any progress it makes is welcome.

Still, it’s pretty incredible that The Bachelor franchise is expanding and becoming more diverse by creating a show for old people, but still has yet to meaningfully include people of color or queer people in its central shows.

The network and producers are still very, very afraid of scaring off the show’s audience by handing over a season to anyone other than a bland white straight person. And there’s a reason for that: The one season of The Bachelorette that starred a black woman had significantly lower ratings, which lead franchise creator Mike Fleiss to say that “revealed something about our fans.”

It was almost four years ago that ABC’s then-president said that the show needed to increase the diversity of its casts first, and then maybe there could be a non-white star, because that’d give them more “candidates to ultimately end up in the role of the next bachelor or bachelorette.”

They have increased the diversity of the candidates, but given the chance to actually cast someone in a lead role (Mike Johnson, for the most recent example), they instead choose to hand their show over to the most boring white person they can find (sorry, Peter Weber).

As to the new Bachelor: Senior Edition, or whatever it’ll be called, here’s a radical ideal: Why not just include older people in the regular cast instead of giving them their own series?

People of different ages date and marry each other all the time. Of course, acknowledging the diversity of human experience is not a priority for a multi-million-dollar franchise that traffics in sexist cliches and works hard to reinforce archaic gender roles.

Recommended for you: Bachelor in Paradise and Are You the One: Which way will queer representation go?