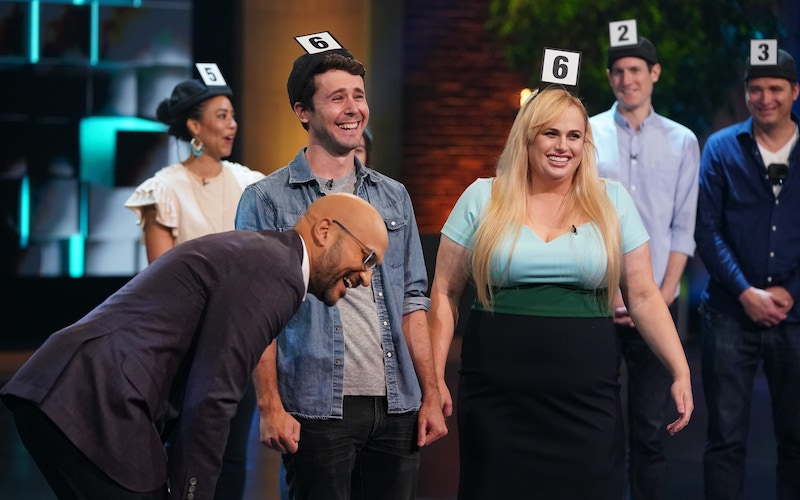 Rebel Wilson plays a game about the subconscious on Brain Games, hosted by Keegan-Michael Key, who's doubled-over with laughter. (Photo by Eric McCandless/National Geographic)

Good Monday morning! This week’s reality and unscripted TV premieres range from the TV debut of an Oscar-nominated documentary to a brand-new reality competition. So, let’s start with those two shows.

The Oscar-nominated documentary The Cave premieres on TV this weekend (National Geographic Channel, Saturday, Jan. 25, at 9). It Dr. Amani Ballour and her team, who work to help people in Syria and “doing their jobs in a way that would be unthinkable in the oppressively patriarchal culture that exists above,” according to NatGeo’s description. They also “contend with daily bombardments, chronic supply shortages and the ever-present threat of chemical attacks.”

There’s a web site, StandwithDrAmani.com, on which you can read Dr. Amani’s plea for help, and also learn about hosting free screenings of the film in schools and communities.

A brand-new competition series comes to Bravo this week with the premiere of Spy Games (Bravo, Mondays at 10) that comes from a great lineup of producers.

Here’s my full review of Spy Games, plus interviews with a star and a producer of the series.

A new Chopped tournament starts this week: Chopped: $50,000 Champs Challenge (Food Network, Tuesdays at 10) is a competition between previous champions, with a prize that is, you guessed it, $50,000. (If you haven’t yet read the story of Chopped’s pilot, which is truly insane, read it here.)

Brain Games is being rebooted (NatGeo, Mondays at 8), and is now set in a studio with host Keegan-Michael Key playing those “brain games” with celebrity guests.

Chef Marcus Samuelsson’s No Passport Required returns (PBS, Mondays at 9) with his visits to six new cities, where he talks with people and tries cuisine in immigrant communities.

Two married vets and their practice are followed in the new series Heartland Docs, DVM (NatGeo WILD, Saturdays at 10).

Gwyneth Paltrow’s heavily criticized company Goop is getting its own Netflix series: the goop lab (Netflix, Friday), which says it goes behind the scenes with Gwyneth and her team as they consider and test things to sell to rich people.

Two days earlier, in perhaps unrelated scheduling, Netflix is premiering Pandemic: How to Prevent an Outbreak (Netflix, Wednesday), which focuses on the flu virus.

The Circus returns to cover the Democratic primary—and probably the Senate trial of impeached President Donald Trump (Showtime, Sundays at 8).

There are also new seasons of Street Outlaws: Fastest in America (Discovery, Mondays at 8) and Paranormal 911 (Travel Channel, Saturdays at 9).

Former New England Patriots star turned convicted murderer Aaron Hernandez is the subject of a Netflix documentary that was trending on Twitter all day last Wednesday, after it premiered.

Tonight, ID has a three-hour special about him. Aaron Hernandez: An ID Murder Mystery (ID, Monday, Jan. 20, at 9) “delves into the multiple murder investigations connected to Aaron Hernandez, taking a closer look at the motivations behind these killings and examining the fear and devastation he left in his wake,” according to ID.

Accept the Call (PBS, Monday, Jan. 19, at 10) tells the story of a Minnesotan whose 19-year-old son is arrested because he was trying to join ISIS. The film, PBS says, “explores racism and prejudice against immigrants, the rise of targeted recruitment by radicalized groups, and the struggles of Muslim youth growing up in the U.S.”

Emanuel (Starz, Monday, Jan. 20, at 9) is a documentary about the families of people killed in a church in Charleston by a white supremacist. Starz says the film is a “story of justice and faith, love and hate, examines the healing power of forgiveness.”

Hopelessly in Love: Anna Nicole Smith & Larry Birkhead (Lifetime, Friday, Jan. 24, at 9) is the story of “their romantic, tumultuous and often unstable union which ignited a highly- publicized battle over Dannielynn, following her heartbreaking overdose and death,” according to the network.