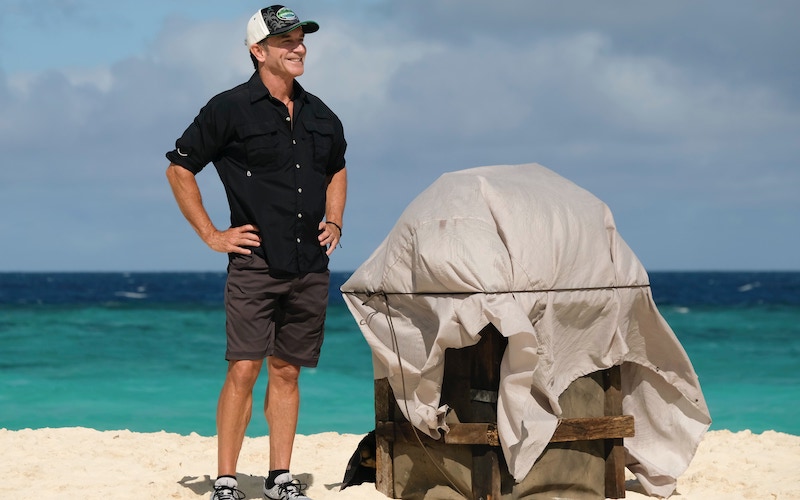 Jeff Probst and his latest surprise on Survivor: Winners at War (Photo by Timothy Kuratek/CBS Entertainment)

CBS officially released the list of cast members competing on Survivor season 40: Winners at War, including beautiful black-and-white photos of the 20 returning winners—and Jeff Probst, who offered new details about the new “fire token” currency, which is tied to the Edge of Extinction.

Beyond that, there’s not a lot of new information if you’ve been paying attention since last summer, when the winners competing on Survivor 40 all disappeared to go film the season—but there is a lot of hyperbole, with CBS calling this season “the most memorable, heroic and celebrated champions from the past two decades in the biggest battle in the show’s history, as the series’ best strategists of all time fight to earn the title of Sole Survivor again.”

In the press release, host and showrunner Jeff Probst said, “To celebrate and honor this momentous 20-year milestone, we created the biggest battle in SURVIVOR history! For the first time ever, 20 winners, who have masterfully proven they can outwit, outplay and outlast in this game, will face off to determine who is the greatest player of all time!”

Why, then, do we need not one but two major twists in the game? Why not trust the format—and these 20 winners—enough to just let them play Survivor?

How fire tokens are connected to the Edge of Extinction

The press release confirmed the return of Edge of Extinction, which remains awful, and promised that Survivor: Winners at War will have “epic challenges” and “a brand new layer of the game with the introduction of fire tokens.”

While CBS offered no additional details, Jeff Probst gave a detailed interview about fire tokens to Survivor state media, and it makes it clear that the two twists are tied together.

He said the idea came out of “Survivor is about a society that forms, and they form their own rules. And they decide who stays and who goes home. And over time, every society ends up having a currency.”

That’s interesting, though when societies developed currency are they usually manufactured by, and then given to people, by an all-powerful god who commands obedience?

Every Survivor player will receive one fire token, and when they’re voted out—and shipped over to Edge of Extinction where they’ll have a chance to Chris Underwood their way to $2 million—they have to give their fire token to someone who’s still in the game (and not on EoE).

In the game, fire tokens can be used to buy things. In EW, Dalton Ross gave details about initial things that will be available for purchase and their costs, which I’ve written here as a handy bulleted list:

That’s all reasonable, though it’s kind of amazing that a challenge advantage has the same value as beans.

This next part, though, oh god. Here’s Jeff Probst:

“Now players in the game have tokens. People on the Edge have nothing. But what the Edge does have are advantages—that are of no value on the Edge of Extinction but are very valuable in the game. So it becomes supply and demand. I have what you want in terms of an advantage. I’m going to sell it to somebody in the game for your fire token. Your fire token gives me what I need because it allows me to buy an advantage in that return challenge to get back into the game. So now we have a true economy in which you have what I need, and I have what you want. And here’s the price and I’m offering to sell it to you.”

So basically, the Edge of Extinction will be like an Amazon warehouse full of advantages for the eliminated players to try to sell to people. That gets more complicated, at least in Probst’s description:

“I would send you the advantage, and it says ‘This advantage has this power and it costs this many tokens. You have until sundown to pay for it. If you don’t, it goes away and no deal is done.’ So as the game gets deeper, these advantages become more valuable. Because there’s only a few people left, and they all want them. Which means I can charge more for them. And the more I charge, the more tokens I get. That helps me, because I’m trying to get back in to catch you. You need me. I need you. I got what you need, you got what I want. Supply and demand. It will ebb and flow. And the idea is, if it works, in future seasons, who knows? Maybe you’re not looking for idols, you’re looking for tokens. And with tokens, you buy whatever you need. That’s the big idea.”

It is a big idea, and it’s one that I may have been interested to see be folded into a normal season of Survivor. After all, it’s a version of a major element of the game on Stranded with a Million Dollars, a show that had its flaws but offered a chance to see how players balanced immediate needs of survival and comfort with the eventual prize.

But guess what else is a big idea? Bringing back 20 amazing Survivor winners—okay, 19 amazing winners (sorry, Ben)—and letting them just play a game that has lasted 20 years and 19 seasons because its core idea is strong enough to not need meddling every single season.

Imagine casting these 20 people and then thinking, They’re not enough. What this game needs is more advantages, more ways to protect the people I like, and something new and artificial.

The truly exhausting part of these new twists—the fire tokens plus Edge of Extinction—is that they allow the focus to shift from “outwit, outplay, outlast” to “outsearch for idols, outplay with advantages that destroy other people’s games, and outlast while not doing anything except befriending the jury.”

I’m ready to see this cast (below) play Survivor again, and I’m also now used to the hidden immunity idol windfall, but with players being able to shop for advantages at the Edge of Extinction, and for those eliminated players to be able to give themselves an advantage to get back in the game and potentially win after actually having been voted out? It’s hard to get excited about that part.

In a preview, Jeff Probst said that, in casting the show, “We wanted to represent the different periods of the game,” which is interesting considering that all but two winners from seasons 22 to 37, with two exceptions, have been cast. So that’s 14 of the 20 players who are from the past nine years.

While the cast was revealed by CBS during last fall’s finale, the official cast list came out today. Here’s CBS’s cast list, with the casts’ current cities and occupation, in alphabetical order by first name: