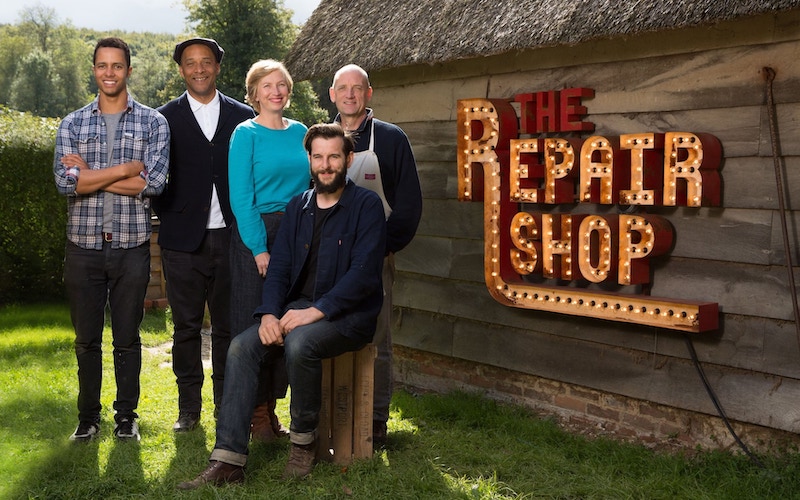 The regular experts and restorers on the BBC's The Repair Shop, which is now on Netflix (Photo via BBC)

There’s a genre of reality TV I’ve grown increasingly fond of over the past few years: British and Australian reality shows that are several years old. They’re appearing in the States mostly thanks to Netflix, which isn’t turning them into American versions (though it does that, too); it’s just licensing seasons for broadcast in the U.S.

My newest UK obsession is 2017’s The Repair Shop, which I learned about on Friday from Linda Holmes’ review in Pop Culture Happy Hour’s newsletter. On Twitter, Linda called it “almost pathologically soothing,” and that is accurate. Netflix’s algorithm doesn’t know me at all; I had to search for it, letter by letter. The effort was worth it.

In the title sequence, the narrator introduces the The Repair Shop’s occupants and says “they will resurrect, revive, and rejuvenate treasured possessions and irreplaceable pieces of family history, bringing both the objects and the memories that they hold back to life.”

That is exactly what follows over the next 30 minutes or so. (Of the five seasons that have aired in the UK, seasons 1 and 2 are on Netflix; season 2’s episodes are 45 minutes long.)

There are fragments of Antiques Roadshow and American Pickers, in that we meet objects and their owners, but those shows center on the financial value of an object, suggesting that their true value—even if they’re kept and not sold—is monetary, the potential to cash in.

There is no discussion of cost in The Repair Shop, whose services are free, even though they deliver several thousand pounds of emotional value.

The objects that come in—a clock, hand-crafted by a blind man, that no longer chimes; Dalek toys that no longer exterminate; an aged piano bench; a broken wooden fish purchased from indigenous artists—have been inherited, and often are destined to be passed along.

We’re told their stories, both of the object itself and how it’s been acquired by a person or their family.

What The Repair Shop does with those objects, though, is magical, wiping away the fading of time and revealing the sheen of memory.

Step into the warmth of The Repair Shop

People apply to bring in their items—”a damaged heirloom, a prized antique, a loved one’s treasured possession or anything else that needs restoring,” the casting application says—and then bring it to the experts in the barn, which is at the Weald and Downland Living Museum, though The Repair Shop itself doesn’t exist outside of the show.

When the owners leave, the expert restorers get to work.

Doing that work is a rotating group of craftspeople. Specialists come and go, depending upon the objects in need of repair, but there are a core group, including up-cycler and defacto host Jay Blades; furniture restorer Will Kirk; clock repair expert Steve Fletcher; and ceramics restorer Kirsten Ramsay.

When people get back their restored objects, and see the life breathed back into them, it’s often an emotional moment, for them and the people who did the work.

But the part of the show I like best is just spending time with the experts as they work. The Repair Shop is constructed so it feels like we’re just there with them, in the barn. There are no cutaways to interviews filmed in a studio with a green screen background.

Jay and the other experts meet people as they drive up or walk in the door, and while this is obviously coordinated entirely by the production, it feels organic, like people are just walking up to this charming little Santa’s workshop.

The experts talk to the camera about techniques they’re using, and we see close-ups on mechanisms and parts being painted. They work with each other, usually to ask for help with a particular part of a project. Sometimes they make each other a cup of tea; sometimes they give each other shit; sometimes both.

They’re all there at their tables full of tools and parts, and a warm glow from the work lights. No one is looking at their phones; they’re working with their hands and with each other. The vaulted wood ceiling and its thick beams create space for the transformations to occur. (While I love British reality TV, I am apparently particularly fond of series set in a barn.)

All of this—the camaraderie and cooperation, the detailed work and transformations of the objects—exudes a kind of hospitality and affability that’s absent from other shows and, you know, sometimes from the world. But in The Repair Shop, needs and strengths come together, as people help other people. It also patched me up, too, sending me away feeling better than I had before I visited.