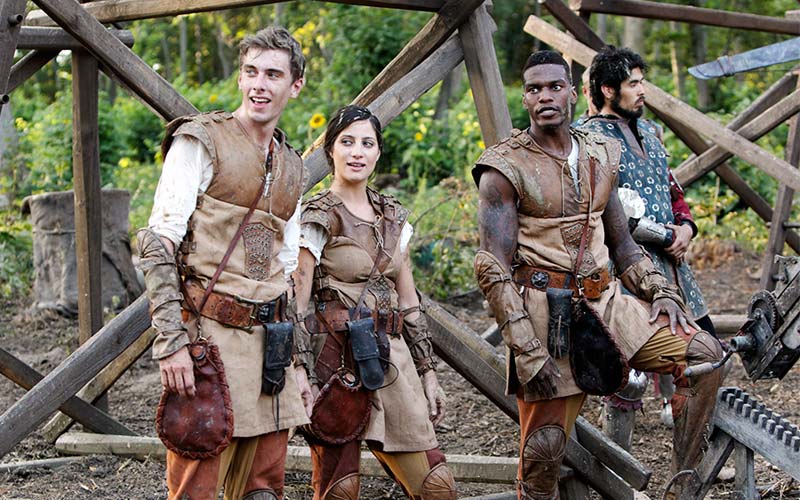 Paladins competing in a challenge on The Quest, which is binge-watchable on Netflix for a limited time. (Photo by ABC)

Disney+ is reviving ABC’s 2014 hybrid reality TV competition The Quest, reuniting its original producers for season 2, with a significant change to its casting: the show will have teenage contestants.

The streaming platform also announced other reality programming, including a “‘brainteaser competition series” from the producers of The Amazing Race.

In a press release, Disney+ executive Agnes Chu said, “We are thrilled that we get to bring the groundbreaking The Quest back to life, and can’t wait for people to discover The Maze, our special subjects in Meet the Chimps and the innovation and wonder of making Pixar’s Sparkshorts.”

The return of The Quest will have teenage contestants and what Disney+ describes as “more epic world building interactive elements”:

“Teen contestants will compete in an unfolding drama where they encounter mystical beings and magical encounters that rival their favorite books, games and movies. They will be embedded in a fully immersive, 360-degree world complete with seamless technology, creature design, practical effects and scripted characters who interact dynamically with them.”

The first season asked, “What makes a hero?” That seems like a particularly strong theme for a younger cast, and also aligns well with other Disney+ programs, like the Marvel Hero Project.

The show is currently in development, and thus does not have a premiere date or even a timeline.

It will, however, apparently be filmed at the same castle in Vienna, Austria, with the contestants going to Everealm, the fictional world created during the first season. Both of those are mentioned in the new announcement.

The Quest’s original producing team is reuniting for the second season:

The producers campaigned for a second season, but season one’s ratings weren’t strong enough for ABC to bring back the show. The show did live on with rewatch parties and found new fans when it was briefly on Netflix. (Hopefully, Disney+ will stream season one.)

The lack of a renewal was disappointing, because The Quest was the best version of a hybrid reality show I’ve ever watched. Before nice, feel-good TV became trendy, it demonstrated that a reality series didn’t need cutthroat competition or cruelty (on behalf of contestants or the production) to be wildly entertaining.

Recommended for you: An interview with The Quest’s producers about how season 1 was created

Amazing Race and Race to the Center of the Earth creators Elise Doganieri and Bertram van Munster, along with Mark Dziak, are producing a new series for Disney+ called The Maze, which sounds like a distant cousin of The Quest and The Amazing Race.

Five teams—one adult and one teenager each—will go “on a journey of mind-bending proportions,” and will have to “solve riddles and decipher clues that will guide them through European cities and fairytale villages.”

“In each episode the characters will reveal information to participants pushing them onward and closer to their final destination where all contestants will convene, but only one team will solve the Maze.”

Meet the Chimps, from National Geographic, which:

“…takes viewers into the secret life of one of the largest and most unique wildlife sanctuaries in the world – Chimp Haven—a 200-acre refuge tucked deep in the forested heart of Louisiana, which is home to more than 300 chimpanzees. This six-part series tracks the ups and downs of this extraordinary group of chimps that are given a second chance at life by a staff whose dedication, compassion and commitment knows no bounds.

Through a seamless blend of natural history and observational-documentary filmmaking, Meet the Chimps puts the chimps—the heart and soul of the series—at front and center. A real-life drama with a full emotional range, the series gives unparalleled access to everything happening at Chimp Haven, including food squabbles, alliances, romances, ‘bromances’, tears, tantrums, high jinx and heartbreaks.

There’s also a new, untitled series that will go behind the scenes at Pixar to follow people in its SparkShorts program.

The announcement from Disney+ explains:

“By offering a select group of Pixar employees the opportunity to make their own animated short film, the SparkShorts program helps discover and support the next generation of Pixar storytellers. The series will give audiences an exclusive and immersive look at the filmmakers and their films, while exploring the creative philosophy and community that makes Pixar unique.”