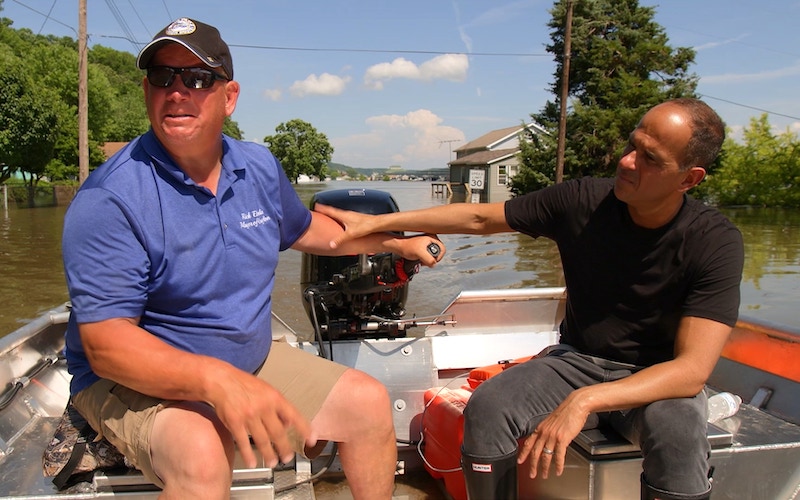 With tonight’s episode of The Profit, titled “Rise of an American Floodtown,” which is set in a small town on the Mississippi, Grafton, Ill., Marcus Lemonis’ CNBC show is evolving beyond its original format and formula, Lemonis told me.

This particular episode of The Profit (CNBC, Tuesdays at 10) initially began not as a regular episode, but as a documentary special, similar to those that have aired previously (The Profit: Marijuana Millions, The Profit in Cuba, and The Profit: My Roots.) Those are branded with the show’s title but produced by CNBC’s documentary unit, not by the show’s producer, Amber Mazzola, and her Machete Productions.

Marcus told me that he was working on “a documentary on the Mississippi River, and ended up in Grafton,” but realized that “in good conscience just couldn’t walk away and act like, Okay, you did your little profile. That was really more of a personal decision that it was anything else.”

So, they made a change, even switching production crews. As Marcus Lemonis explains in “Rise of an American Floodtown,” he ended up staying and checking in throughout the summer in a town that he’d never heard of before: “I didn’t even know what Grafton was—even being based in Chicago.”

In the episode, Marcus helps the town’s recovery in various ways, gives feedback to its leaders, focuses attention on veterans and first responders who live there, and also erects another giant American flag (40 feet by 80 feet).

And while he does end up investing, it’s not at all in the same way that we’ve seen on the CNBC show up until now. “I wanted to create a blueprint as best I could,” Marcus told me, so that “people see that it doesn’t always have to be Marcus fixing something.”

“I wanted people to understand that people can fix themselves, and you don’t just throw money at everything. It isn’t always a money thing. It really is the sense of pride and a sense of work,” he added. “It was important for me, particularly in the climate that we’re in today, to really demonstrate and show that people can help themselves, they need don’t anybody to solve their problems for them.”

Grafton was affected by the Great Flood of 1993, experiencing 195 days of flooding that reached more than 20 feet above flood stage. Last year’s spring flooding decimated tourism in the town and lasted 127 days, leading even more people to move away.

“I felt like the people of Grafton were people beaten up and downtrodden and lot of them lost hope and left—they left the town forever,” Marcus told me. “I really was starting to think to myself, Oh my god, that any time there’s a crisis in the town—a fire, a hurricane, a tornado, a flood—are people just going to leave, and are we going to end up with a cemetery of small American towns?“

That idea—the “cemetery of small American towns”—was personal to Marcus, who spent summers in Youngstown, Ohio, where his dad was from, and which also experienced decline. “I started seeing some of the same remnants of people just leaving,” he said.

In Grafton, that made Marcus consider “how do I get people to not just give up? It’s a little brazen of me to think that I could solve that problem on my own, but I thought that I would do what I could to at least contribute to some sort of positive outlook.”

One thing that does not come up in The Profit episode is what’s contributing to increased flooding, such as climate change. I asked him about that, and Marcus told me that was intentional.

“I really learned there’s an art and a science to making a statement without making the actual statement, and to let people draw their own conclusions,” he said. “I thought about it much like an educator, that if I was trying to get my students to understand the moral of a story, I don’t necessary always have to spell out the story for them.”

“If people believe that climate change is a contributor to flooding, they’re going to draw that conclusion on their own, they’re going to make their own assessment. But if they don’t believe that it is, they’re going to come up with some other variables, like the dredging of the Mississippi River, or the legal or the illegal levees that were put up along the river. But the fact of the matter is that there’s less places for water to go and there’s more water: those two factors combined, nothing’s going to change, that’s just the landscape that they’re dealing with.”

The Profit episode spends some time with businesses that are inundated and damaged by floodwaters, and also others that have just seen their business drop off because of the flooding and lack of tourists and visitors. He also explores—as the clip above shows—parts of the town not affected by flooding, and talks about investing in those areas.

“The point I wanted to make to the viewer,” Marcus told me, is that the flood “isn’t the only reason that there’s a problem. … It’s easy to blame the strife of the town on the flood, but I wanted to point out that one has nothing to do with the other.”

“I wanted people to understand that the whole town wasn’t underwater, a portion of it was, so let’s understand what isn’t underwater and let’s make it the best we can be,” he added. “And that’s really lesson for me to learn, and it was also a lesson for everybody else to learn.”

Learning from his experiences is something Marcus Lemonis wants to include more of on The Profit, which he says is going to be evolving as this season continues, and as he grows and changes.

“I’m starting to use The Profit more than just to try to teach people small business process. I’m trying to get people to see larger philosophical lessons and ask themselves larger philosophical questions,” he told me. “That is really how I think this show is going to start to pivot, where we can go into a business and we can teach people stuff and we can do different things, but at the end of the day, what’s the takeaway?”

“I want to take the show in a direction that will continue to ask the hard questions, deal with the hard issues,” he said. “I think it’s important for people to ask more philosophical questions about society and business and how human interest and commerce intersect. It can destroy people or it can build people up, and I think there’s more to learn and a lot more for me to learn, for sure.”

I asked why this change was coming now: is it him, is it small businesses, is it the current state of the world? “I think it’s a combination of all of that,” Marcus told me. “I’m older—seven years older than when I started. When you go from 30-something to 40-something, you change as a person. My personal life has changed, my business life has changed, my TV live has changed. For me to be exactly the same is hard.”

Those changes may not be well-received by either fans of The Profit or by the network that airs it, Marcus knows.

“It’s funny: there’s a lot of debate both internally and externally about how the show has evolved,” he said. “And some people don’t like it: People say, Well, the format was good, you should have stuck to the format. But that wouldn’t feel authentic to me. I’m not the same person I was when I started the show, and neither is the world we’re living in.

“Why shouldn’t the show evolve with the world and with me? I’m going to continue to push that evolution as hard as I can,” he added. “Obviously, viewers have a choice, and networks have a choice, and maybe the network likes or doesn’t like it, or maybe the viewer likes or doesn’t like it, but I just needed to stay authentic and stay as real as I possibly can.”