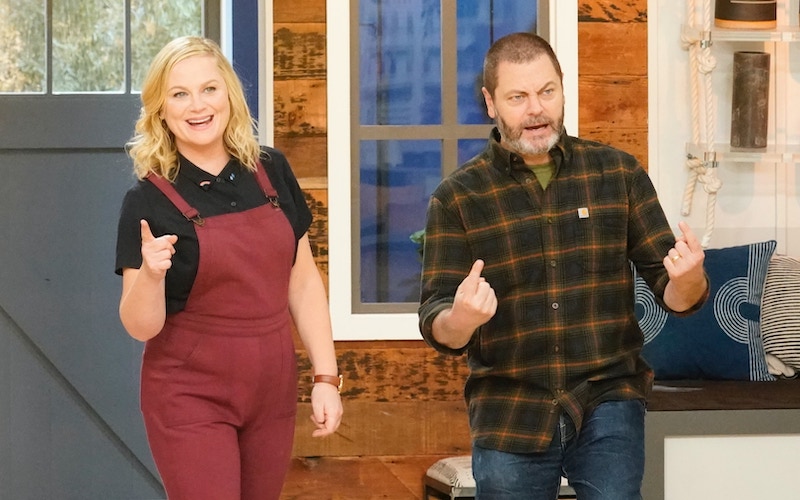 NBC has renewed Making It, bringing back Nick Offerman and Amy Poehler’s charming, perfect crafting competition for a third season.

I absolutely love Making It, and was worried about its future when NBC burned through the entirety of season 2 during 10 days in December, which was odd scheduling, especially since the season was not holiday themed.

In a press release, NBC said that Making It season 2 “averaged a 0.7 rating and 2.6 million viewers overall in live plus seven day results from Nielsen Media Research,” which are fine but not spectacular ratings.

The network was also happy about the demographics of the show’s audience: it “delivered strong high-income and high-education audiences, indexing at a 123 among adults 18-49 in homes with $100K+ incomes (with 100 representing an average concentration of those homes) and a 126 among adults 18-49 with four or more years of college,” NBC said.

Amy Poehler appeared at the Television Critics Association winter press tour this morning and made the announcement about the renewal, along with announcing that she and Tina Fey will host the 2021 Golden Globes. They previously hosted in 2013, 2014, and 2015.

And Dick Clark Productions president Amy Thurlow said, Tina and Amy have provided Golden Globes viewers with some of the most memorable moments the show has ever seen. We’re thrilled to welcome them back in 2021.”

The show has not yet started casting, at least not publicly: its casting website hasn’t been updated since last spring.

Neither Amy Poehler nor NBC said anything about when Making It season 3 might air. Season 1 aired during the summer; season 2 aired a year and a half later, in December 2019, over just 10 days.

Nick Offerman is starring in a new FX on Hulu series, Devs, which premieres in March.