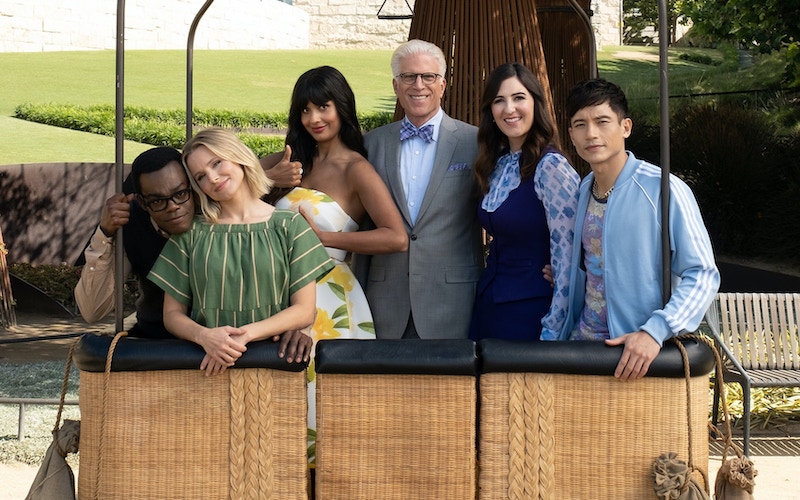 Happy Friday! It’s the last day of January, and I am not sure where this month has gone. This year, every week or two, I’m highlighting some things that sparked joy for me—to borrow from Marie Kondo, since I still haven’t figured out a succinct way to describe or label this feature—and since it’s been 20 days since the last time I did that, it’s way overdue.

First, a quick thanks to my newest patrons: Aaron Barnhart, Kia B., Cindy Bowlin, and Wendy Dunn. I’m so grateful to them, and to everyone who’s currently or previously supported my work over the years, whether through Patreon or through a newsletter upgrade (or even just by reading these words!). If you can, please join them in becoming a patron! Okay, on to even more good things.

The Good Place and its finale (no spoilers!)

This week came news that one of my favorite reality shows from the past decade is returning, and I’m so excited!

But the end of a scripted show, The Good Place, also taught me to embrace endings and goodbyes—to just appreciate something while we have time together, and accept when it’s gone.

The NBC sitcom concluded its four-season run last night. I won’t spoil anything, though I will say that I thought it was perfect, and it makes the entire series easy to recommend, even though my interest waned a little last season.

And, to tie this to some kind of nonfiction so I stay on brand: An unexpected bonus to The Good Place has been The Good Place: The Podcast. It takes us behind the scenes, sharing everything from production secrets to the actors’ thoughts.

But I really appreciated how it introduced us to the people responsible for actually making the show: its crew, its craftspeople, and especially its writers. I’ve loved getting to know the people who made such wonderful art.

Another excellent sitcom that’s coming to an end is Schitt’s Creek, which is currently airing its final season on PopTV. (That’s right: You don’t have to wait for it to be on Netflix. It’s even streaming on Pop’s site and app.)

To avoid going even further off-brand, I’ll remind everyone that Schitt’s Creek was inspired by the Kardashians, so it is very much reality TV adjacent.

What’s really been adding some joy to my life recently is a song from last season: “I’m a Little Bit Alexis.”

It’s a super-catchy pop song, and even includes an “ew, David,” which is my favorite part. (Listen here.)

At the Television Critics Association’s winter press tour, Annie Murphy—who plays Alexis and performed the song—said that, when they were writing it, “we knew that it had to be kind of a jokey, spoofy song. But at the same time, the three of us were deeply desiring to write like a banger that got played at clubs, and it gets played in clubs now. It’s just blown our minds.”

The show’s creator, Dan Levy, who plays David, said, “It is playing in a gay bar right now.”

He added that its title, “‘A Little Bit Alexis’, was one of the first notes that I had written down when we were in my dad’s living room brainstorming the show. That Alexis had a reality show that was not very good that lasted a season called ‘A Little Bit Alexis.’ And to now be here talking to you about it with this song having been played on the radio and charted on iTunes, it is surreal, to say the least.”

So yes, even the song was inspired by reality TV. Could Schitt’s Creek get any better?

I’ll be writing more about this season of Project Runway soon—I just caught up with January’s episodes—but to focus on a small thing that made me laugh, last night’s episode had some great Christian Siriano moments.

He’s really locked into confidence in his role, and besides his useful and very specific critiques, he also gives the contestants a lot of shit. Sometimes that manifests as attitude or exasperation, but it’s always with a sense that he is thinking of what’s best for them.

I particularly loved when he found Jeffrey outside, smoking, doing a “model fitting,” in scare quotes because Jeffrey was talking to his model but otherwise not working.

“Geoffrey is forever outside. I don’t know what he does outside,” Christian said, exasperated. “It’s like a hundred degrees out.”

He opened the door and leaned out and when Geoffrey said he was “in a fitting,” Christian mocked him a little.

“I was just in a fitting. We’re, like, in Paris and hanging?” Christian asked.

And Geoffrey handed him the perfect retort: “We’re in Brooklyn.”