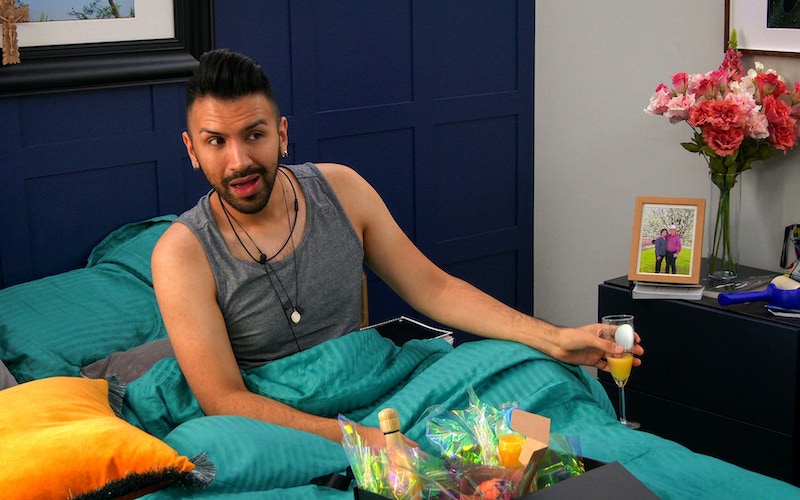 Chris, a contestant on The Circle (Photo via Netflix)

“It’s like a fucked-up Brady Bunch,” Karyn, a contestant on The Circle, says when she sees her seven competitors’ faces for the first time, all inside boxes on a screen. That’s a perfect description of the reality show, if that fucked-up Brady Bunch spent every episode texting each from inside their boxes.

The Circle, a competition reality show now on Netflix, isolates its contestants, illustrates our depressing tendency to superficially judge each other, and has just enough flashes of charm, humor, insight, and humanity to keep us staring at our screens to make a giant corporation money: in other words, it’s a veracious illustration of social media.

The format is Netflix’s adaptation of a Channel 4 series that’s aired two seasons so far. From the clips of the UK version I’ve seen, the Netflix version remains similar in structure and style. (Both versions are produced by Studio Lambert.) Eight people live in an apartment building and communicate only via a social media platform built for the show. They can chat as a group, one-on-one, or in group chats they create. Once a day, they rank each other; the top two choose one person to eliminate, or block. Then a new person moves in, and has immunity for the next round of eliminations.

The contestants’ introductions are reminiscent of CBS’s Big Brother episode-one bio packages, except without the scripting but with manic editing and graphics so hyper it’s like they’ve been loaded up on sugar for days.

They’ve been chosen because they have a difficult task: making it look interesting to constantly speak their texts out loud and read the responses they receive.

That’s what happens for the majority of the show: it’s people talking to and reading screens. The social media platform they use is all “voice activated,” meaning it’s some crew members’ unenviable jobs to type everything they say.

Some of the conversations are indistinguishable from those on other competition reality shows, except that they occur with people staring at screens and reading each others’ responses. There are occasional challenges and games—via their screens, of course. (The format dispenses with interviews and confessionals.)

They have conversations, but they also talk to themselves, reacting and judging what they’ve just read or seen: other players’ photos, messages, and confessions.

The Circle is at its most interesting when it cuts from one player making assumptions to the person they’re talking about, instantly revealing whether they were right or wrong.

The format also offers other opportunities for them to get real-world information: the eliminated player chooses one remaining player to visit in real life, and then records a video that the whole cast eventually watches.

The players can talk to each other about this: the game itself doesn’t have hide much, since the identities of the influencers are public, and one of them has to announce who’s been blocked.

When the contestants mistakenly judge each other—assuming someone is a catfish, deciding someone is shady—will they learn from that, adjusting and adapting their game and/or growing as people? Or is it just too easy to judge things on a screen? Let’s find out as I continue to judge this show I just watched.

Snarky narration, player deception, and cold truths in The Circle

Most players in The Circle are playing as themselves, from awkward Shubham to buoyant Chris Sapphire, whose surname perfectly describes his personality.

There are two catfish as the game starts: Karyn, “a hundred, thousand, million percent lesbian” in “a happy and healthy relationship,” decides to play as “Mercedeze,” using a random person’s photos because of the way others’ judge her based on appearance. She talks strategy a lot about what she has Mercedeze share, but Karyn is basically being herself.

Seaburn is playing as his actual girlfriend, Rebecca, so he’s using her photos. This isn’t something he’s given a lot of thought to—or perhaps just isn’t aware of the layers of gender performance this introduces.

When he chats privately with another straight male player who flirts with “Rebecca,” Seaburn, alone in his apartment, recoils: “To have someone flirt with me because of my girlfriend’s pictures is fucking disgusting.” What did he expect? Why doesn’t he see the irony in what happens later, when he compliments a male contestant and flirts with him? Seaburn isn’t interrogating what’s actually happening here, but why would he need to? He has the safety of his online mask.

Getting to know everyone—professional model Alana, professional basketball player Antonio, bro-tastic Joey Sasso, and analytical Sammie—in the first episode takes a while, but they’re a likable group overall, and become more so the more we learn about them.

The Circle’s episodes tend to sag in the center, like when there’s an extended montage of the cast choosing new profile photos. While the first episode goes from introductions to an elimination, there’s only one more elimination—which is referred to as being blocked from The Circle—in the first four episodes.

That’s a glacial pace, and even with attempts at end-of-episode cliffhangers, it can drag.

I liked watching the interaction—and the duplicity, and the strategy, and the developing relationships—enough to keep watching, but I couldn’t shake the feeling that this is a show I don’t really want or need to binge-watch—or watch at all? I needed some time and space; I needed to walk away from my screen.

Netflix is spreading the series over three weeks, with four episodes every Wednesday—perhaps to avoid spoilers and perhaps because this show really does work better at least when episodes arrive over several nights, like summer reality shows.

The Circle has the feel of what we’ve come to expect from disposable summer reality TV, and has some genetic material from Big Brother (directions issued by screen, contestants filmed with robotic cameras only) and Love Island (constant changes in cast, snarky narration from a comedian).

That comedian, Michelle Buteau, adds lightness and commentary that helps, because watching the players using social media is often quite boring. They wander their apartments or lounge in their beds, always talking to their screen, reading out loud what we’ve just heard someone say.

Yet there is undeniable comfort in this, too, seeing other people who are all alone, going through the motions of daily life (cooking dinner, showering) or passing the time (doodling, dancing, or reading—actual books on a reality show!).

The production design highlights this curious way they’re both isolated and connected: The apartments are identical, just with different sofas and decor that seems appropriate for the players’ personalities.

There everyone is, locked in their same little boxes, all alone, projecting the parts of themselves that they hope other people will love enough to keep them in the game or, even better, give them the power to destroy their competition.

It’s a discouraging view of what we’ve done to ourselves over the past 15 years or so, becoming more and more addicted to our phones and scrolling through posts, even with the moments of actual connection that occur.

Yet I don’t think reality TV in the form of The Circle will be the torpedo that takes down the Death Star that is Facebook and the empire of social media. Instead, The Circle has a more Black Mirror conclusion: this is who we are now.

Message. And there I am, spending hours lying on my couch, watching a bunch of people talk to text, picking up my phone when I’m bored by what I’m watching. 😆Then, of course, I turn to my screen to type this attempt to connect with you about what we’ve both just watched. 🥴Send.