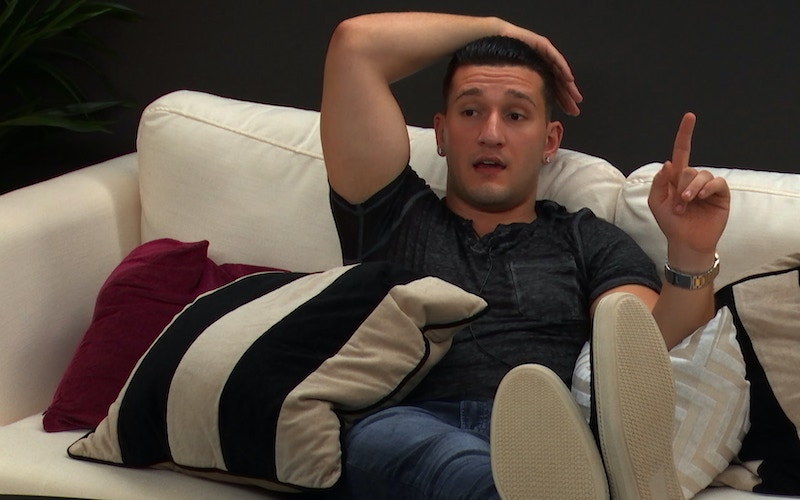 Joey Sasso on episode 5 of The Circle (Photo by Netflix)

As frustrated as I am with The Circle’s release schedule, I am both captivated by the series and appreciative of how the second batch of episodes, four through seven, really had a clear arc and theme.

The through-line was catfishing, and whether pretending to be someone else—especially in images—is worth it, both in the game and real life. To lose “Mercedeze”/Karyn and gain “Adam”/Alex at the start of these episodes was pretty devastating, going from one of the players I liked the best to one I still cannot stand. And by the end, we had an entirely new catfishing strategy unfolding.

I liked Karyn/”Mercedeze” for her wit, her incisiveness (saying about “Rebecca”/Seaburn, “You deserve a fucking Oscar for this shit”). But still I’m not quite sure why exactly Karyn chose those particular images, which I think was a terrible choice, and illustrated by how hard they backfired. That game where people hashtagged each other’s photos was brutal. Because of that, I do wonder if Karyn proved her point or not. After all, people didn’t like her pictures but did like her and her personality. Even obnoxious “Adam”/Alex, upon seeing Karyn, said, “I like her better than I like those filtered-ass photos.”

This may be what the editing is showing us, but players seem to be responding most to the people who use their own photos and distinct, strong personalities.

Everyone loves Shubham, after all! Sammie on Shubham: “You can’t not like him. You just can’t.” Thumbs-up emoji.

And I do appreciate why Karyn chose the catfishing approach. As she told us in her exit interview, “Day in and day out, I’m judged by what I look like versus what I sound like.”

Her visit with Chris left me quite emotional, especially as she shared with him how her strategy connected to her queerness. “We fight to show who we really are, and not what the world perceives us to be,” she said. “The weight that we carry—people will never understand that.”

A few episodes later, new addition Sean decided to reveal to Chris—and then to the other women (including, of course, Seaburn)—that her photos weren’t real. Considering their reaction to learning who Mercedeze actually was, I wonder how they’ll respond to this. Could the confession help connect her to people? Especially if she explains why she initially hid her appearance? Cliffhanging on this moment suggests that it’s pivotal and important.

Why I want more time with the original Circle family

As I mentioned earlier, but is worth repeating, “Adam”/Alex annoyed me immediately: not just for his catfishing, but because how grotesque his behavior is, both what he says in The Circle and what he says in his apartment.

For one example, how about when he told us, “it’s a popularity game. I don’t want to fuck it up,” and then immediately fucked it up by telling the women in a group chat that he’d choose, for a date, “the girl that arouses me the most with their answers.” Barf emoji. Barf emoji. Barf emoji.

Alex’s catfishing did give us a scene that will surely be studied and analyzed for years to come, when “Adam” went on a date with “Rebecca.”

Since that’s Alex and Seaburn, that meant we watched two married straight men on a date, via text, pretending to be 1) their girlfriend and 2) a hot guy, both trying to say things they imagined that A) their character and B) the other person would want to hear. How often do we all do a version of this, projecting an image and then responding to other people’s projections?

I also love how “Rebecca” continues to fool absolutely no one except innocent Shubham, who called her both his sister and his nightlight (cue the awes), and possibly “Adam”/Alex, who’s falling for her—but only as “Adam,” not as Alex, because Alex is married and happy and totally secure and who are you to judge him!

The immediate revulsion I had toward “Adam”/Alex was not the same reaction I had to Joey, but I definitely was not into Joey that first episode, when he led with cockiness. But now? Heart emoji.

When chatting with Adam, Joey said “he must have a dictionary of cliched terms. What a stupid person.”

Joey is so perceptive and genuine, and yet also sometimes hilariously naive, like when he saw the eggplant emoji and said, “What’s that other chili pepper? What’s that?” Is the hot pepper emoji really used as a penis?

When I was thinking about all these newbies and why I’m having a hard time warming up to them, I think Joey nailed it for me: “Who wants to have dinner with Adam and get to know him when you can spend time with people you already love?” he said in a group chat with the people Adam didn’t pick.

That’s it exactly: I’ve grown to like the original group so much that I don’t want to see any of them leave. I love seeing Sammie’s bouncing around her apartment with excitement; Seaburn’s shocked face; Joey’s actual laid-back commentary, delivered while he is actually lying down; Shubham’s excitement and skepticism; Chris’s random made-up names and personality that was captured so perfectly in the painting of him with rainbow hair.

I was especially dejected when Antonio was replaced with a grossly arrogant man who cannot stop flirting and then reminding everyone that he’s married, as if that will cover him as much as his massive pants do.

And I really felt that way when new player Ed, his shirt (it technically doesn’t even meet the definition of a shirt; it was like a wide tie), and his mom entered the competition.

It was the first time that I flinched at the very heavy hand of the producers. It’s just stupid and unfair to have two people in one apartment. The excuse we were given, that everyone was allowed to bring something with them and that Ed chose his mom, is so flimsy Ed wouldn’t even wear it as a shirt. So next season everyone can bring a friend with them? Unlikely.

Ed seems like he could be interesting on his own, though he’s very similar to other players, including Bill, who I haven’t even mentioned yet because, well, there isn’t much there.

Going into the final episodes, there are just two women in the competition. Take it away, Sammie: “This is why we can’t have this many guys! Because now we’re talking about nuts and balls!”

We are, however, getting some fun insight into how these guys differ in terms of what they project versus what they do. That montage of the guys working out—and only Shubham actually working out—was brilliant.

In the middle of several of these four episodes of The Circle, I found myself sometimes getting a little bored and impatient, and found that it was best to do something else while watching, like folding laundry or talking to my TV.

But in certain moments, I’m riveted: whatever story producer or editor designed these tense “what will happen?” moments and episodic cliffhangers knows what they’re doing. I’m ready to see how this season ends.